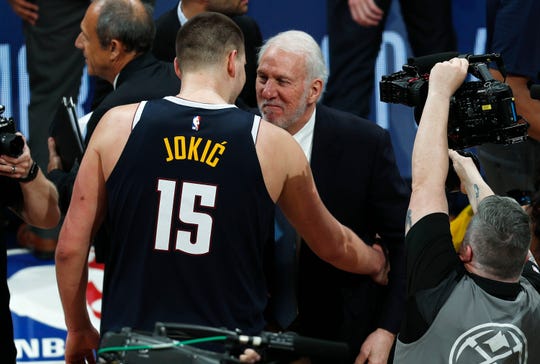 Toronto — Kawhi Leonard wasn’t interested in putting up a career-high point total against the Philadelphia 76ers. Even as history beckoned, Toronto’s understated star was hoping he could take a seat on the bench.

Leonard scored a career playoff-high 45 points and grabbed 11 rebounds, Pascal Siakam added 29 points and the Raptors beat the 76ers 108-95 in Game 1 of their Eastern Conference semifinal series on Saturday night.

Leonard’s previous postseason high was 43, with San Antonio against Memphis on April 22, 2017. He matched that by making a pair of free throws with 4:45 remaining, then topped it by draining a jump shot on Toronto’s next possession.

Although he appeared focused on reaching the mark, the opposite was actually true.

“A big-time performance at both ends,” Nurse said. “I just like the force he’s playing with at both ends.”

Philadelphia coach Brett Brown said Leonard is “leaps and bounds” ahead of the player he once coached as an assistant with San Antonio.

“The variety of ways that he scored and could get his shot off on some pretty good defensive players and big athletes was incredibly impressive,” Brown said.

Leonard received a standing ovation when he checked out with 3:14 to play and the Raptors up 107-88. He’s just the second player in Raptors history to eclipse 40 points in a playoff game. The other was Vnce Carter, who scored 50 against Philadelphia in Game 3 of the second round on May 11, 2001.

“Kawhi was just in the zone,” Toronto’s Kyle Lowry said. “He probably could’ve had more, but he facilitated some and made some shots.”

“He’s as good as there is in the NBA at generating his own shot, and then making tough shots,” Redick said. “Clearly we need to figure out what we’re doing with him and Siakam.”

Lowry had nine points and eight assists as the Raptors led by as many as 20 en route to their fifth straight postseason victory, extending a franchise record.

Toronto won its 14th consecutive home meeting with Philadelphia and improved to 22-3 against the 76ers since the start of the 2013-14 season. No other opponent has beaten Philadelphia more often over the past five seasons.

Tobias Harris had 14 points and 15 rebounds, and Redick scored 17 points for the 76ers, whose four-game playoff winning streak was snapped.

Embiid missed nine of his 13 shots in the first half. He finished 5 for 18.

Toronto improved to 3-14 in the first game of a playoff series, winning an opener for the first time since a first-round victory against Washington on April 14, 2018.

The only other time Toronto won a playoff series opener was 2001, when Carter’s Raptors won Game 1 of the second round at Philadelphia. Toronto lost that series in seven games.

On Saturday, hot starts from Leonard and Siakam put Toronto in control early, and Lowry fuelled a pivotal 10-0 run in the third quarter that kept the Raptors comfortable.

Toronto’s first bench points came on Serge Ibaka’s jump shot with 1:57 left in the third, a basket that put Toronto up 89-70. The Raptors finished with 10 bench points, seven from Ibaka and three from Fred VanVleet.

Leonard and Siakam both shot 7 of 9 and scored 17 points as Toronto jumped out to a 14-point lead in the first quarter. Down 7-2 early, the Raptors immediately reclaimed the lead with a 9-0 run and went almost eight minutes without missing a shot, hitting on 13 straight from the field. Toronto was up 39-31 after one.

“It was big to have those two guys step up and jump-start us,” Nurse said.

Leonard scored 10 more in the second and the Raptors led 61-52 at halftime.

(At) Denver 90, San Antonio 86: Nikola Jokic had a triple-double, Jamal Murray hit a clutch floater with 36.8 seconds remaining and the Nuggets held off the Spurs in Game 7 to advance in the postseason for the first time in a decade.

In a matchup between a Denver team with the youngest playoff roster in the West and the savvy Spurs, the second-seeded Nuggets built a 17-point lead in the third quarter only to see it whittled down to two with 52 seconds remaining.

Jokic finished with 21 points, 15 rebounds and 10 assists, with no pass bigger than the one to set up Murray’s floater. DeMar DeRozan had a chance to slice into the deficit but was blocked by Torrey Craig. Then, the Spurs didn’t foul and the Nuggets were able to essentially run out the clock.

Since making the Western Conference finals in 2009, the Nuggets have bowed out in the first round on four occasions. This was their first playoff appearance in six seasons.

Denver will host third-seeded Portland in a series that begins Monday.

Murray added 23 points for the Nuggets, who captured a Game 7 for the first time since May 3, 1978, when David Thompson had 37 in a win over the Milwaukee Bucks.

Rudy Gay had 21 points for San Antonio, while DeRozan and Bryn Forbes each added 19. The Spurs fell to 3-4 in Games 7s under Gregg Popovich.

Jokic turned in another monster game. Jokic showed off his arsenal of shots, even throwing in a sky hook. Jokic also had a triple-double in Game 1.

Denver went an NBA-best 34-7 at home in the regular season and rode the energy of the crowd.

It was a forgettable first half for the Spurs, who trailed 47-34 after shooting 22.2% from the floor.