Wayne State University was close to approving a plan to build a new $25 million athletic facility on campus that will house its basketball teams. 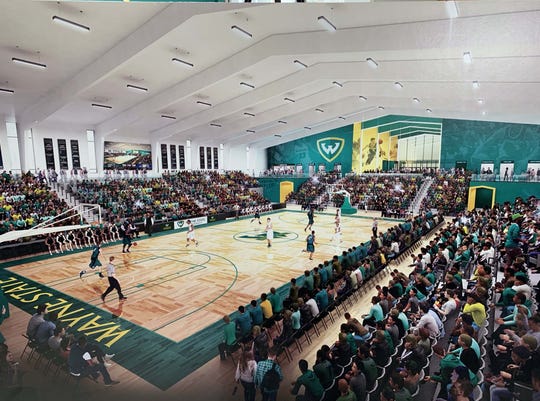 Detroit — Built in 1965, the Matthaei Center has been the hub of Wayne State’s athletic campus in midtown Detroit. Intramural and club sports, the swimming facility and almost every other sport were housed in the same outdated facility.

The upgrade is coming.

With an 8-0 vote, the school’s Board of Governors unanimously approved a plan Wednesday to build a new $25-million on-campus athletic facility that will house its men’s and women’s basketball teams. In addition, the Pistons announced that the new facility will be home to their affiliate in the Gatorade League.

The new 70,000-square-foot facility — seating 3,000 — will be near the corner of Warren and Trumbull, where an intramural field currently sits, and replace the Matthaei Center as the athletic centerpiece. Construction could be completed late in 2021 and the facility is slated to be ready for the start of the 2021-22 basketball season.

“This is a watershed moment for Wayne State University. Now our basketball teams will have a state-of-the-art facility to play in,” school president M. Roy Wilson said. “It’s not just the fact that we have better facilities and the passion it’s going to incite in the crowd. It’s going to benefit so many other ways.”

Tellem talks about partnering with Wayne State and the benefits of having the G-League affiliate closer to the Pistons in Detroit. The Detroit News

Wayne State will finance the construction of the new arena, through bonds and about $3 million in private funding. The Pistons will have a 30-year lease agreement, providing the backbone of the financing for the project. The university also will sell naming rights to the new facility, but those negotiations have not begun.

The new building will have basketball offices and locker rooms for both home and visiting teams. The Matthaei Center will be used for club and intramural sports and other activities.

“Obviously, this is a game-changer. There are so many things we can do with this, not just with our basketball program, but for inner-city athletics, state playoff games, bringing tournaments in here,” Wayne State athletic director Rob Fournier said. “It really gives us a cornerstone; this is the centerpiece. Matthaei is nice but this will be illuminating and transformational.”

Wayne State competes in Division II in the NCAA and the expanding athletic campus — with its new Harwell Field for baseball, renovated facilities for softball and a multipurpose indoor facility completed in 2011 — could signal a desire to move up to Division I.

Kim Trent, chairperson for the Board of Governors, didn’t rule out a move up in designation, but the improvements help in that determination.

“Certainly, this will help us if we want to move in that direction. It will give us the opportunity because before we didn’t have the opportunity,” Trent said. “I don’t know that (moving to Division I) is a decision we’re going to make, but it’s certainly something that is now on the table.”

The Pistons’ commitment in the new deal doesn’t bode well for the Grand Rapids Drive, their current affiliate. Although both sides signed a two-year extension agreement that extends through 2020-21, it’s unclear how things will move forward.

The Pistons don’t own the Drive but have an affiliate agreement. There could be a buyout forthcoming or the Pistons could pursue an expansion G-League team, with approval from the NBA.

WSU president talks about the school approving plans to build a $25-million arena and partnering with the Pistons to bring a G-League team to Detroit. The Detroit News

The Drive, who have been the Pistons’ affiliate for five seasons, have indicated in a team statement that they are not planning to leave the DeltaPlex in Walker, Mich. and move to Detroit, which leaves that franchise — as well as their fans — in limbo.

“We have no plans on relocating to Detroit but continue to have great communication and a positive relationship with the Pistons organization,” the Drive said in a team statement. “We are solely focused on our sixth season this upcoming fall, in partnership with the Detroit Pistons and the NBA.”

Adding a presence in Midtown will augment the Pistons’ increasing foothold in Detroit. The team moved into Little Caesars Arena for the start of the 2017-18 season and construction of the Pistons’ new practice facility, the Henry Ford Pistons Performance Center, is scheduled to be completed in September.

Pistons owner Tom Gores, who spearheaded the team’s move back to the city after almost 30 years at the Pontiac Silverdome and The Palace of Auburn Hills, under then-owner Bill Davidson, has made a commitment to playing in the city and expanding their footprint in the community.

The new facility also is a boost for Wayne State, which had a capacity of 1,331 at the Matthaei Center but with a bigger venue, conceivably could pursue jumping from Division II to Division I, and could host other events, such as high school playoff games, the university’s graduation and more.

The project also will provide funding to add turf for one of the intramural fields, plus an elevator to the press box at Wayne State football stadium, Tom Adams Field.