With “Jimmy! Butler!” chants ringing from the rafters, he helped Philadelphia force a seventh game against Toronto in the Eastern Conference semifinals, hitting big baskets in bunches and scoring 25 points in the 76ers’ 112-101 victory over the Raptors on Thursday night. 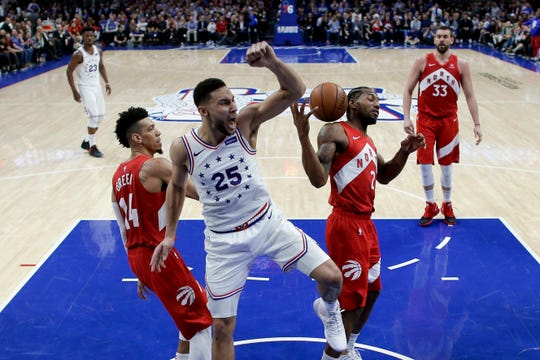 Philadelphia — Jimmy Butler lived up to his Jimmy Buckets nickname.

With “Jimmy! Butler!” chants ringing from the rafters, he helped Philadelphia force a seventh game against Toronto in the Eastern Conference semifinals, hitting big baskets in bunches and scoring 25 points in the 76ers’ 112-101 victory over the Raptors on Thursday night.

“I play to win,” Butler said. “Right now, this is what I have to do in order to give us a great chance at winning.”

Game 7 is Sunday night in Toronto. The Milwaukee Bucks await the winner.

Kawhi Leonard, who scored 30-plus points in the first four games in the series, was finally tied up early by the Sixers and hit 29 points well after the game was out of hand.

Leonard and the Raptors had no answers for Butler and All-Star guard Ben Simmons. Simmons broke through and scored 21 points – more than his combined total of Games 4 and 5 – and helped show the Sixers still had some fight after a brutal Game 5 loss.

“It was amazing focus. Everybody was locked in,” Simmons said. “We knew what was at stake.”

Joel Embiid had played through a bad left knee and a stomach bug for most of the playoffs and the entire team had reason to be ill after the Raptors crushed the Sixers by 36 in Game 5.

“I knew I had to come in with high spirits,” Embiid said. “If I’ve got to play 45 minutes and push myself out there, that’s what I’ll do.”

Embiid had a burst of energy late in the third when he blocked a driving Leonard, and Simmons capitalized with a basket for an 18-point cushion. Embiid, who gingerly walked into the postgame press conference with his left knee packaged in ice, had 17 points and 12 rebounds in 35 minutes.

Embiid didn’t do much early in Game 6, but Butler and Simmons built some needed separation.

Butler about did it all, and showed in the first half why the free agent will command a max contract – $188 million over five years – in the offseason.

Butler, disgruntled in Minnesota before he was traded to Philadelphia in November, scored 19 points in the half and all of them seemed worthy of the highlight reel. He took a bit of a trick shot when he rebounded his own missed jumper and was fouled by Kyle Lowry on an off-balance attempt. The basket was good and so was the free throw. Butler stole the ball from Leonard and capped the half with a fast-break dunk for a 58-43 lead.

“Game is simple. I shoot the ball when I’m open,” Butler said. “Sometimes I shoot it when I’m not open.”

He forced his way open in the first half, making 9 of 15 shots in the first and he gave the Sixers the confidence they needed to know another game wasn’t going to turn into a rout.

“He was all over that game,” coach Brett Brown said. “The mood in the locker room, you could sense the serious side. They got the moment and I think he got it as much as anybody and led us.”

Simmons was called out by Butler about the need to attack the basket and play more off screens to become the triple-double threat he was in the regular season and not the non-factor he was against the Raptors. Simmons did it all early (eight points, five assists in the first quarter) and the Sixers got the outside shots to fall – an early domination that happened even as Embiid was held scoreless until he hit a 3 early in the second quarter.

Simmons had no turnovers and six assists in 34 minutes.

“What he did today was lot of the reasons he was an NBA All-Star at age 22,” Brown said.

(At) Portland 119, Denver 108: Damian Lillard had 32 points, including 17 in the third quarter, and the Trail Blazers staved off elimination to force a decisive Game 7.  The Nuggets head home with a chance to make it to the Western Conference finals for the first time since 2009. Denver has been to the conference finals three times in franchise history.

The winner of Sunday’s game will face the winner of the series between the Golden State Warriors and the Houston Rockets. The defending NBA champion Warriors have a 3-2 advantage in the series after a 104-99 victory on Wednesday night. Game 6 is set for Friday in Houston.

CJ McCollum added 30 points for the Blazers, who haven’t advanced to the conference finals since the 2000 playoffs. Rodney Hood came off the bench with a career playoff-high 25 points and fans at the Moda Center drowned out his postgame on-court interview by chanting “Rodney! Rodney!”

Nikola Jokic led the Nuggets with 29 points and 12 rebounds, while Jamal Murray added 24 points and 10 rebounds.

Seth Curry’s 3-pointer gave the Blazers a 101-88 lead with 7:24 left. Things got heated midway through the final period after Jokic was called for an offensive foul and the players got into a shoving match and had to be separated. After a review, there were offsetting technicals involving Denver’s Will Barton and Torrey Craig, and Curry and Zach Collins for Portland.

Lillard hit an off-balance jumper that put Portland up 106-93. The Nuggets got within 113-103 with 1:04 left, but Craig and Jokic fouled out and Portland closed out the win.

The Nuggets were in this situation before: They lost on the road to San Antonio in Game 6 in the opening round, forcing that series to return to Denver for the deciding game.

After Portland won the quadruple-overtime marathon of Game 3, Denver beat Portland at home to even the series. Then Paul Millsap had 24 points to spark Denver’s 124-98 blowout of the Blazers on Tuesday night – and put Portland on the verge of elimination.

Maurice Harkless dunked to start the game and the crowd at the Moda Center booed each time Jokic got the ball. But the Nuggets built an early 16-7 lead after Murray’s 3-pointer.

Denver extended the lead to as many as 10 points in the opening quarter but Portland went on an 11-4 run to start the second quarter that closed the gap to 38-37.

The Blazers tied it at 45 but Jokic’s basket held them at bay until Lillard’s 3-pointer gave Portland the lead. Lillard added a layup to extend it and Portland led 58-54 at halftime after outscoring the Nuggets 32-20.

Torrey Craig’s 3-pointer tied the game at 69-all midway through the third quarter, but the Nuggets were unable to pull back in front until Jokic 3-pointer made it 76-75. Lillard answered with his own 3 to reclaim the lead.

Lillard’s sixth 3-pointer of the game put Portland up 83-78. He had 17 points in the third quarter alone and the Blazers led 87-80 going into the fourth.

Jokic collected his fourth foul with just over two minutes left in the third quarter and headed to the bench.