After a long road that began in his hometown of Saginaw, Brian Bowen hopes to have his name called at the NBA Draft on June 20.

Saginaw's Brian Bowen talks to the media on Friday at the NBA Draft Combine in Chicago about putting his controversial past behind him. The Detroit News 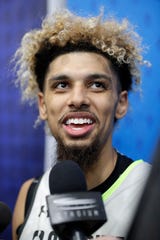 Brian Bowen's pursuit of a basketball career took him to Sydney, which was not a place he expected to be. (Photo: Nam Y. Huh, Associated Press)

Chicago — It’s a long way from Saginaw to Sydney.

Brian Bowen’s journey from mid-Michigan to the pros took a detour across the globe.

This week, the Saginaw native is in Chicago trying to realize his NBA dreams for the second straight year.

“It’s a little different this time, I would say,” Bowen said. “I feel a lot better about it.”

Bowen was one of 77 players invited to the NBA Draft Combine, getting measured and tested and analyzed by teams. But no one’s story is quite like Bowen’s.

Bowen, once among the most sought-after college basketball recruits in the country, spent last season with the Sydney Kings of Australia’s National Basketball League. He was banned from playing college basketball after spending his freshman season in limbo.

Through all the changes, “Tugs” kept his flashy golden hair — he said he found two barbers in Sydney. He also expanded his palette, trying kangaroo meat: “It’s not too bad,” he said. “It’s like roast beef, but more chewy.”

“I’m a lot stronger mentally than I thought I was,” Bowen said. “Through all the stuff I’ve been through, I pushed through it, and I know I can overcome a lot of things. I have to look at it like taking it day by day and realizing there are people whose situations are way worse than mine in life.

Playing for one of the nation’s best programs, Bowen became a McDonald’s All-American, on the wish list of most every big-time college program.

In March of 2017, Bowen was in Chicago for the McDonald’s game, alongside La Lumiere teammate Jaren Jackson Jr., who was already signed to play at Michigan State.

Jackson was among many players there trying to convince Bowen, who would later win MVP of the Jordan Brand Classic national game, to attend their schools, along with Deandre Ayton of Arizona, last year’s top NBA pick.

But there were other forces at work.

Bowen made the surprise decision to sign with legendary coach Rick Pitino at Louisville.

In September, Bowen was identified in the FBI’s investigation into bribery within college basketball. His family was accused of being paid $100,000 by Adidas to attend Louisville, while Pitino was fired. 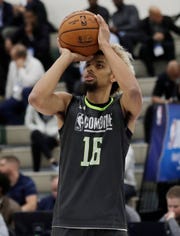 Bowen’s father, Brian Bowen Sr., later testified in federal court he was told by aspiring agent Christian Dawkins — also a Saginaw native — that he could receive payments from other schools if Bowen chose to attend them.

Dawkins later testified that MSU’s Tom Izzo refused to pay despite the agent’s hopes that Bowen would be a Spartan.

Amidst the controversy, Bowen then transferred to South Carolina with hopes of playing as a sophomore.

While waiting in NCAA limbo, Bowen declared for last year’s NBA Draft but did not sign with an agent.

Bowen’s last trip to Chicago was during last season’s draft combine. After missing a year of organized basketball, the rusty Bowen was sluggish next to the other prospects.

Even worse, the NCAA declared him ineligible for his sophomore season right before the deadline to withdraw from the draft.

On draft night, nobody came calling.

The Australian league offered a life raft in the form of the Next Stars program, of which Bowen became the first participant, providing an alternative pathway for NBA prospects who are unable or decide not to play college basketball.

Bowen signed with the Kings, in Australia’s largest city.

“I needed to get out of the country just clear my mind and do a whole different spiel,” he said.

Bowen was on a team with NBA veteran Andrew Bogut, but played sparingly, averaging 6.3 points in 15.4 minutes per game in 30 contests.

“They know who you are,” Bowen said. “Everybody is out to get a job, out to feed their family.

“You’ll get some hard fouls that just anybody over there wouldn’t get, but you just have to learn to deal with it and fight through.”

Bowen said Australia made him tougher.

After spending a few days in Saginaw recently, Bowen was eager to return to Chicago to show some things to NBA scouts.

“I’ve improved my all-around game,” he said. “That’s what I want to show. Being able to shoot the ball from an NBA range now and everything, just feeling a lot more confident with my ballhandling.”

In a pair of combine scrimmages, Bowen averaged 10.5 points and 5.0 rebounds. His corner shooting numbers ranked among the top-five forwards tested at the combine.

Bowen said the Pacers have scheduled an in-person workout with him in Indianapolis, and experts believe Bowen’s path to the NBA could finally be coming to fruition at the June 20 draft.

Jonathan Wasserman, the lead draft analyst for Bleacher Report, said he expects Bowen to be selected in the second round.

“He played much better this year than he did last year,” Wasserman said. “I think he’s definitely going to get himself drafted.”