As his former team made history, Pistons coach Dwane Casey beamed with pride from afar.

Casey watched as the Toronto Raptors took down the Golden State Warriors to win the NBA title. Much of the roster was assembled and developed under Casey’s guidance, when he was the head coach for seven seasons, before being fired last summer. 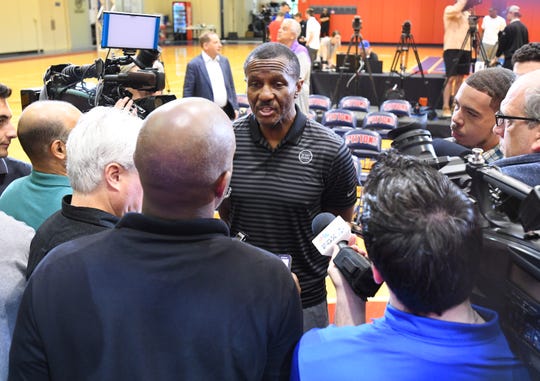 Casey’s dismissal was the first domino is a series of changes, including trading DeMar DeRozan, one of the faces of the franchise, for Kawhi Leonard, who propelled the Raptors to the championship and was named Finals MVP.

Following his firing, Casey was hired by the Pistons and led them to a 41-41 record and first-round exit in the playoffs this season. But he enjoyed seeing his former players celebrate after the hard work they put in to get to that point.

“It was exciting; it was good to see. It was the goal to see that, starting in 2010-11 to get to where they were,” Casey said Friday. “To see a guy like Kyle Lowry, like Pascal Siakam, Fred VanVleet and Serge Ibaka — guys I coached, win — it was really thrilling.”

Watching Raptors fans and the city of Toronto — and the nation of Canada — celebrate last week became a rallying point. It was the culmination of years of consistent effort, led by Larry Tanenbaum, chairman of Maple Leaf Sports & Entertainment, which owns the Raptors and the NHL’s Toronto Maple Leafs.

Ahead of the NBA Finals, several Raptors, including team president Masai Ujiri — who ultimately fired Casey — and Lowry reached out to Casey.

Casey said he respected the acknowledgment and support he got for his role in helping build a champion and he wants to use that same model to help lift the Pistons back to that level.

“I appreciate that. I know how hard we worked to develop a lot of players there. The development program they went through is the one we’re going through now,” Casey said. “It’s reinforcing and I appreciate it. We want to see that here — that’s our goal now.”