The five-year pro will likely be in rotation with newly acquired Derrick Rose and Reggie Jackson. 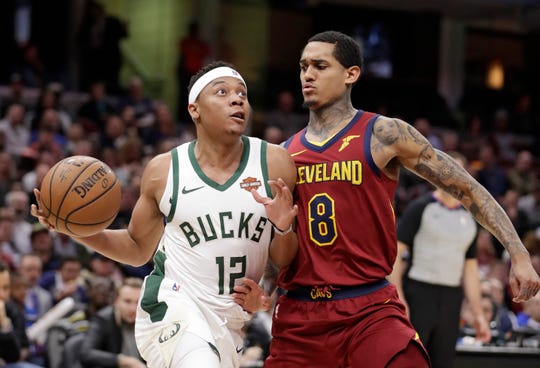 Guard Tim Frazier signed with the Pistons after splitting last season with the Bucks and the Pelicans. (Photo: Tony Dejak, Associated Press)

Las Vegas — With injuries in the past two seasons to one of their top two point guards, the Pistons learned the importance of depth at the position.

They went out and did something about it this summer, signing Tim Frazier to bolster the position and give them another option if the injury bug bites again. The team reached an agreement earlier this week but announced it officially on Saturday, the first day that free agents could be signed.

Frazier, 28, has played five seasons in the NBA, including with the Pelicans and Bucks last season and a previous stint with the Wizards two years ago. He has connections with several Pistons and was most interested in a solid chance to be a contributor in the point guard rotation with Reggie Jackson and Derrick Rose.

“The opportunity became available and I jumped on it,” Frazier said Saturday. “I talked to (coach Dwane) Casey and I was in D.C. with (assistant coach Sidney Lowe), and he reached out and talked to me and I worked it out.”

Frazier averaged 5.3 points and 4.2 assists in 59 games last season, including 19 starts. In his 12 games with the Bucks and time in the postseason, he got to learn a bit about the Pistons, which gave him more information about the roster, to help make his decision in free agency.

“I know a good deal. I was in Milwaukee for the playoffs, so we had to play Detroit in the first round,” he said. “The scouting reports I knew and Thon (Maker) played in Milwaukee and also Tony (Snell).”

Frazier shot 37 percent on 3-pointers last season and is looking to bring that skill set with him. The Pistons struggled at times in getting scoring from their reserve group and if Frazier can add another option, that would be a big boost.

“That’s huge. The game is more than making threes,” Frazier said. “(More than) layups or 2-pointers and everybody is focusing on threes. My game is doing the same.”

Frazier has started 70 of the 245 games in his career and whether he’s mostly a backup behind Jackson and Rose, he’s hoping for health for his new teammates. The Pistons see the value in having a young and experienced option in that group, which is why Frazier’s addition can become one of the most important of the offseason.

He’s not worried about getting more minutes; it’s just about filling the role.

“I wish nothing but health for everybody on our team. Injuries come and go and I hope we can compete and get things done,” Frazier said. “You take (fit) into account when choosing where to play in free agency. I wish nothing but great health for those guys but if the opportunity comes, I want to take advantage of it.”

Svi Mykhailiuk continued his good play in Summer League with 18 points and showed adeptness in getting to the rim and finishing and also in his 3-point shooting, going 4-of-10 from beyond the arc on Saturday.

He’s showing something on the defensive end, which is catching the eye of coach Sean Sweeney.

Sweeney said. “Defensively, I’ve been pleased with his ball pressure. I feel like he’s been getting down in a stance and competing.

“On the weak side, you’re trying to have stance and vision and with each game you should have more experience and get better at it.”

Todd Withers, who played with the Grand Rapids Drive in the G League last season, built on his good showing Friday with another in the second game, posting 14 points, with four 3-pointers.

Along with Jarrod Uthoff (11 points) and Matt Costello (10 points and eight rebounds), they’ve been pleasant surprises so far.