Observations from the Detroit Pistons' 102-84 victory over the Indiana Pacers Monday in NBA Summer League at Las Vegas: 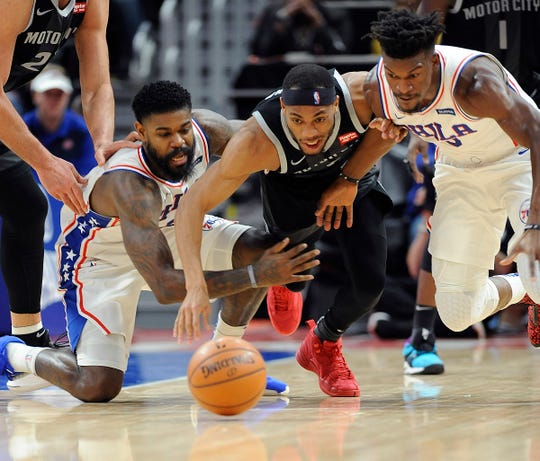 Observations from the Detroit Pistons' 102-84 victory over the Indiana Pacers Monday in NBA Summer League at Las Vegas:

►Bruce Brown continues to impress in his switch to point guard, compiling 23 assists and just six turnovers in the first three games of Summer League. The competition isn’t the same, but at the same time, Brown is playing a different position. Brown still has some mishandles and some questionable plays but he is showing in longer spurts that he can be a ballhandler and if he can integrate that into his game, he could become a more effective player during the regular season.

►Matt Costello is doing himself favors with his play in Summer League. He had his best game, with 20 points and eight rebounds on Monday. After playing overseas and in the G-League, Costello could be drawing some more eyes to his game by being a steady defender, solid pick-and-roll option and good rebounder. At 6-foot-10, Costello can be an effective role player for a team and if a team takes a chance on him, it could pay off. He’s showing for the Pistons that he’s their best big man and can run the offense efficiently.

►The Pistons might have one of the most solid overall rosters in Summer League. With their three players from the main roster, they have a solid base to handle the ball and take good shots and be solid on defense. Many other teams are holding out their top young players from playing and risking injury, but the Pistons are giving theirs some valuable seasoning and playing time. At 3-0, they are well on their way to making a run in the tournament phase, which begins after the fourth game for the top eight teams.

►Jordan Bone made his Pistons debut, after signing his rookie contract on Sunday and his two-way contract on Monday. Bone hadn’t practiced with the team previously and he looked like he hadn’t played competitive basketball in a while. He was able to get to the rim but had trouble getting the shots to fall, going 2-of-7 from the field and finishing with six points, four rebounds and two assists in 16 minutes.

►First-round pick Sekou Doumbouya has missed all three games because of a sore hamstring. For what it’s worth, the Pistons haven’t needed him, but they’d like to get a glimpse of what he looks like against Summer League competition. If they make the tournament rounds, maybe his hamstring could be better and allow him to play, but the overriding sense is that they’ll be overcautious with handling Doumbouya’s injury and not play him unless they’re completely sure that he’s OK.