Beard: Derrick Rose has lofty goals for Pistons, but health should be top priority

It sounds far-fetched, almost comical. Derrick Rose wants to win a championship. In Detroit. With the Pistons.

Beard: Derrick Rose has lofty goals for Pistons, but health should be top priority 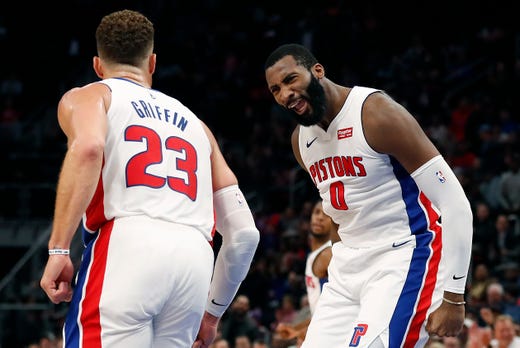 Go through the gallery for analysis by Rod Beard of The Detroit News as he ranks the Pistons in value for 2019-20. Carlos Osorio, AP
Fullscreen 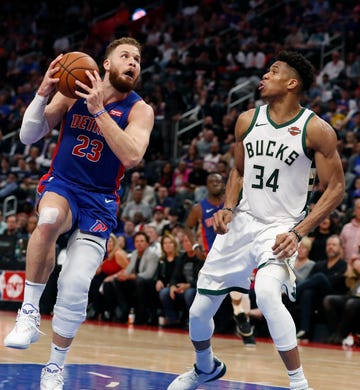 1. PF Blake Griffin, age 30: If there was any question about Griffin’s value, the evidence is in the seven games he missed in the regular season — the Pistons went 2-5 — and the two most lopsided losses in the playoffs. Griffin was voted third-team All-NBA, was an All-Star and had the best season of his career. Despite his huge contract, the Pistons’ short term-future is tied to Griffin. Carlos Osorio, AP
Fullscreen 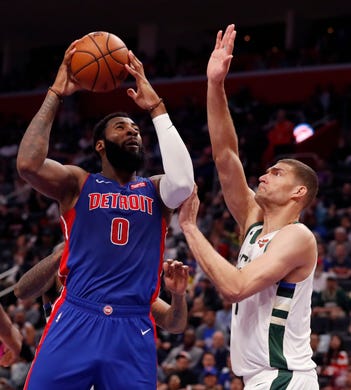 2. C Andre Drummond, age 25: Pistons owner Tom Gores often has spoken of Drummond and Griffin as a duo and plans to keep them together for the foreseeable future. Drummond is the best rebounder in the league and had the best statistical season of his career, with 17.3 points and 15.6 rebounds. He’s just 25 and after this season, he has a player option for $28.8 million next season. That decision will influence the direction of the franchise. Carlos Osorio, AP
Fullscreen 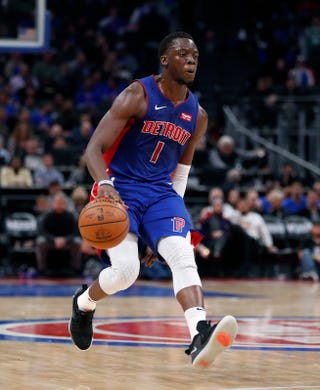 3. PG Reggie Jackson, age 29: As he enters the final year of his contract, Jackson could be a huge asset if he returns fully healthy and can play at the same level as the second half of last season. A good start will increase his value ahead of the trade deadline, which could mean receiving a higher-impact player in return for his expiring contract, depending on the market in January. Carlos Osorio, AP
Fullscreen 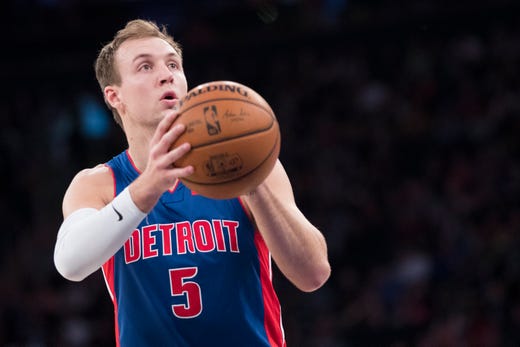 4. SG Luke Kennard, age 23: In his third season, Kennard is becoming one of the bedrocks of the Pistons’ long-term future. In most Pistons trade conversations, his name is mentioned as a desired piece because of his rookie contract and projected production, beyond the 9.7 points and 39 percent on 3-pointers from last season. If there’s a big Pistons trade for a superstar, Kennard’s name is likely to be mentioned. Mary Altaffer, AP
Fullscreen 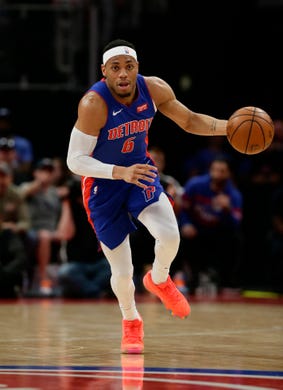 5. SG Bruce Brown, age 22: After a steady rookie season, Brown is looking to continue his success on the defensive end and build on his developing foundation on offense. His shooting will improve but he could also become a team leader and foundational piece in the longer term. As a second-round pick, he has an inexpensive rookie contract, which balances the bigger contracts of the veterans ahead of him on this list. Duane Burleson, AP
Fullscreen 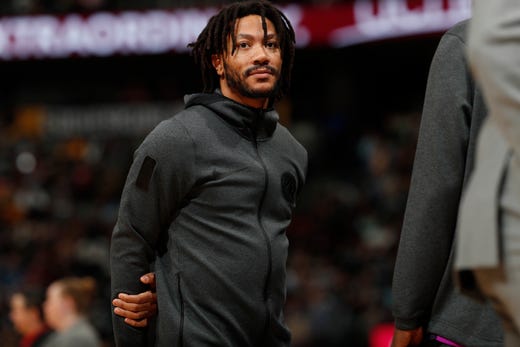 6. PG Derrick Rose, age 30: There is significant optimism around the Pistons’ biggest acquisition in free agency. Rose comes in at a very reasonable two years and $15 million, and if he’s anything like he was last season with the Timberwolves, he could provide a scoring spark for the second unit and possibly could be finishing games. Injuries are a constant question mark but the Pistons are taking a low-risk gamble. David Zalubowski, AP
Fullscreen 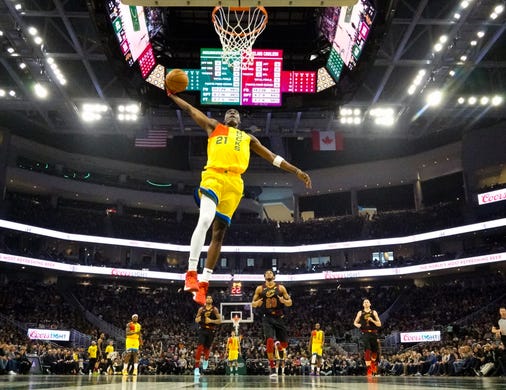 7. SG Tony Snell, age 27: If the Pistons don’t make any other moves, Snell could be in line to be the starting small forward. He was acquired from the Bucks in the predraft deal for Jon Leuer and could be a steady contributor on both ends of the court. His contract, at about $11.4 million this season and $12.2 million in 2020-21, makes him a possible trade piece if the Pistons find a deal they like and need to move salary. Morry Gash, AP
Fullscreen 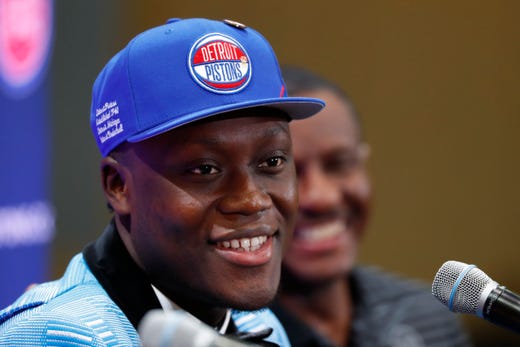 8. SF Sekou Doumbouya, age 18: The rookie was selected 15th in the draft but many had ranked him as a top-10 talent. At 18 years old and 6-foot-9, he’s still going to need some seasoning, but the initial signs are good. Being on a rookie deal makes him an extreme value while he improves his game. Paul Sancya, AP
Fullscreen 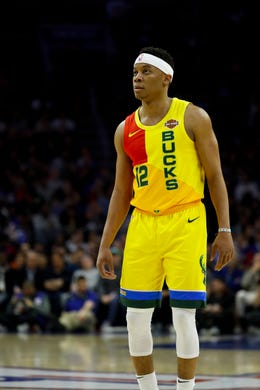 9. PG Tim Frazier, age 28: Signed in free agency, Frazier could have a bigger role than just a third point guard, if Reggie Jackson is traded or if Derrick Rose is injury-prone and can’t play a big chunk of games. He has experience as a starter, so he could become even more valuable if he’s counted on to do more than projected. He’s a good 3-point shooter and solidifies a position that hasn’t produced much in recent years. Matt Slocum, AP
Fullscreen

10. SG Langston Galloway, age 27: He’s entering the final year of his contract and at a cost of $7 million, he’s more likely to be traded than kept through the entire season. He got a bigger role in the rotation last season but has been more of a streaky shooter than the Pistons would like. When he’s hitting shots, he’s a huge asset; when he’s not, he disappears out of the rotation. Carlos Osorio, AP
Fullscreen 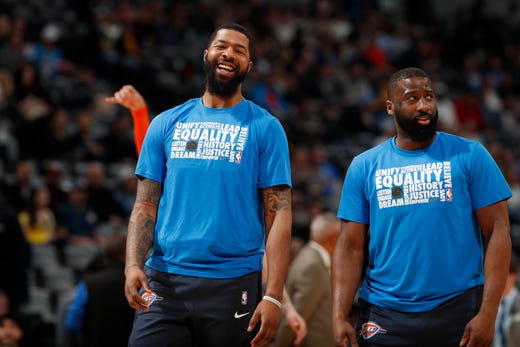 11. PF Markieff Morris, age 29: A free-agent addition, Morris brings a combination of toughness and inside presence that the Pistons lacked in the playoffs last season. He didn’t have a scintillating finish with the Thunder, which made him available for a lower price this summer, and the Pistons pounced on the opportunity. If he gets back to where he was in 2017, he could be a steal in free agency. David Zalubowski, AP
Fullscreen

12. SG Svi Mykhailiuk, age 22: He had a good Summer League performance but still is waiting to get the regular-season playing time to show what he can do. He’s been in a logjam behind the other wings in the playing rotation and until he gets regular minutes, he’ll be mostly potential rather than actual value. He’s on a value contract so if the Pistons were to make a big trade, they’d think twice about including him. Tony Dejak, AP
Fullscreen 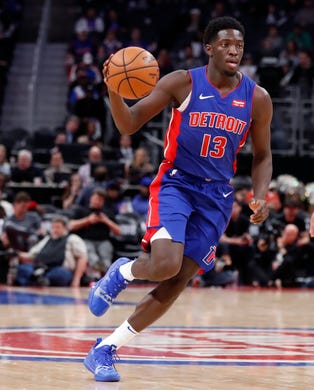 13. SG Khyri Thomas, age 23: Much like Svi Mykhailiuk, Thomas has had to wait patiently to get his turn for playing time in the regular season. He was good at the start of Summer League, and he’ll need to carry that same confidence and skill into training camp and the regular season. His second-round contract value is an asset and as he’s become a very good shooter and ball-handler; he could become a solid rotation player. Carlos Osorio, AP
Fullscreen 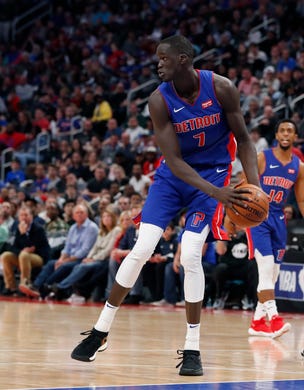 14. PF Thon Maker, age 22: The Pistons took a chance on Maker in the Stanley Johnson trade with the Bucks and saw some flashes last season. They’ll want to utilize him as a possible backup center and rim protector and better scorer. He’s said he’ll get stronger and become more consistent but even if he doesn’t, the Pistons only have this season as their financial commitment to him. Carlos Osorio, AP
Fullscreen 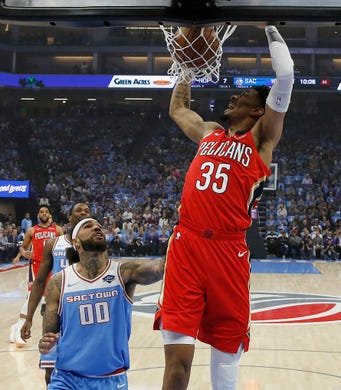 15. PF Christian Wood, age 23: The Pistons made a waiver claim to add Wood on a non-guaranteed contract until the first game of the regular season. At 6-foot-10, he brings size and versatility as a backup center that the Pistons didn’t have last season. It’s a low-risk move that could pay dividends if Wood can flourish in his limited minutes behind Andre Drummond and allows them to flex Thon Maker between backup center and power forward. Rich Pedroncelli, AP
Fullscreen

In Detroit. With the Pistons. 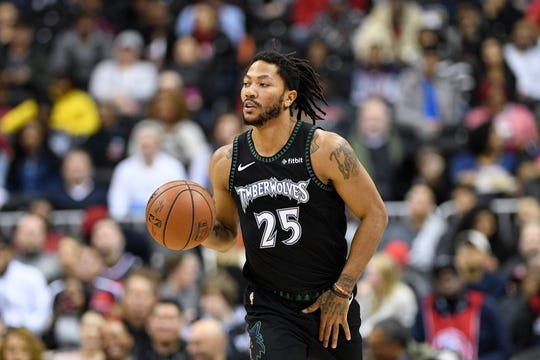 Guard Derrick Rose, who is entering his first season with the Pistons, says his goal is to win a championship. (Photo: Nick Wass, Associated Press)

After last season’s 41-41 mark and being swept out of the playoffs, the Pistons made an underrated addition with Rose on a two-year deal worth $15 million — clearly a bargain, after Rose turned 30 and had a resurgent season. With the Timberwolves last season, Rose posted 18 points and 4.3 assists and shot 37 percent from 3-point range.

His next step: championship contender?

“While I’m in the game, I want to win a championship — that’s what I really want to do,” Rose said last week on Sirius XM. “I got all the accolades I wanted and now it’s time for me to get the one that I really want. I’ve won on every level except for this level.”

It seems to be a stretch. The Pistons, even with a core of Blake Griffin, Andre Drummond, Reggie Jackson and Luke Kennard, were outmatched against the Milwaukee Bucks in the playoff series and the franchise hasn’t won a game in the playoffs since 2008.

What makes this year different?

Derrick Rose explains why his number one goal is to win an NBA Championship and why he thinks it can happen with the @DetroitPistons#DetroitBasketballpic.twitter.com/SzLiLcGDhZ

“With Detroit, we have a great chance with being in the East and we have two great bigs and a great team,” Rose said in the interview. “You never know.”

In many ways, Rose is correct about the uncertainties. There are more questions about how his season will look for Rose than even for Griffin or Jackson, who also have been beset by injuries and would have to be a huge piece of any championship contention.

Rose played in 51 games last season, after playing just 25 in 2017-18. He hasn’t played in more than 66 games since 2011, his third season in the league. Rose missed all of 2013 after suffering an ACL injury and played just 10 games the following year.

Logic dictates that the Pistons will be careful with Rose this season, likely monitoring his minutes and games played very closely. That could include some load management — and luck — with an optimistic target of having him play in 60-70 games and ready for a potential playoff run.

In an interview with Sports Illustrated Now’s Robin Lundberg, Rose addressed the different mindset in dealing with managing minutes and games played. As it’s gradually become more prevalent around the league, more teams are taking advantage and pre-determining games that their stars will miss to keep them fresh.

“If I can play, I’m going to play — that’s with any player. At the same time, you have to be smart and mindful of your body, the season and what you have to endure during that season,” Rose told Lundberg. “When I was going through it, people thought I was crazy for taking the year off after the ACL. Now, that’s the norm. With an ACL now, for sure you’re taking a year off.

In his first season with the Pistons, Rose might need some adjustment time, learning coach Dwane Casey’s offensive scheme and fitting in with new players. His anticipated role will be as the lead guard and scorer in the reserve group, replacing Ish Smith, who signed with the Wizards.

Rose brings a different skill set and is more of a scorer than Smith, but with Kennard also likely to be with the second group, Rose will have scoring help. Casey has an affinity for using two point-guard lineups and that could mean some time teaming with Jackson in blended lineups.

It’s not likely that Rose will start alongside Jackson, but there could be coinciding minutes, depending on the situation.

Predicting the NBA Finals as one of those situations doesn’t seem plausible, but the beginning of a season brings all kinds of optimism.

Just getting through the regular season without a major injury is the first step.