Pistons' Blake Griffin will be out at least until early November

After minor knee surgery in the offseason, Griffin could miss 8-10 games to start the regular season.

Pistons' Blake Griffin will be out at least until early November 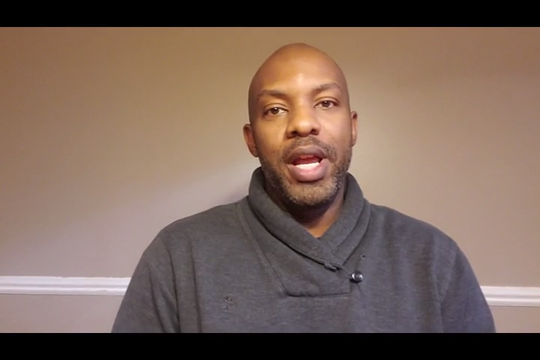 Rapid reaction to the news that Pistons big man Blake Griffin will be out until at least early November because of knee and hamstring injuries. (Photo: Rod Beard)

Detroit — The regular season isn’t getting off to a banner start for the Pistons.

On the eve of Wednesday’s season opener at the Indiana Pacers, the Pistons announced that forward Blake Griffin will miss the start of the season because of knee issues.

“Blake Griffin will not travel to Indiana while continuing a treatment and conditioning regimen for left hamstring and posterior knee soreness,” the team wrote in a statement. “He will be re-evaluated for a return to action the first week of November."

Griffin had minor knee surgery following last season, when he missed the last five games of the regular season and the first two games of the playoff series against the Milwaukee Bucks.

More: Pistons' Blake Griffin plays 'Bad Boys' trivia. So, how did he do?

More: Going up, or going nowhere? Ten issues facing the Pistons this season

Griffin, 30, was an All-NBA selection last season and was progressing toward building on that to start the year. He played in only the first two preseason games and missed the final three, looking to be ready to start the regular season.

That’s not happening either.

The “early November” wording of the statement suggests that Griffin will miss the first five games in October. The Pistons have four games in the first full week of November, which could mean an extended absence for the team’s leader and leading scorer.

In addition, rookie first-round pick Sekou Doumbouya is in concussion protocol after sustaining a blow to the head on Saturday and feeling the effects on Sunday. Doumbouya will not make the trip to Indianapolis but could be available for the home opener on Thursday against the Atlanta Hawks if he clears the protocol. 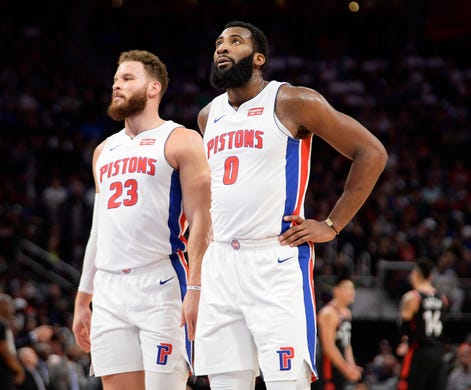 Go through the gallery to meet the 2019-20 Detroit Pistons, with analysis from Rod Beard of The Detroit News. Clarence Tabb Jr., Detroit News
Fullscreen 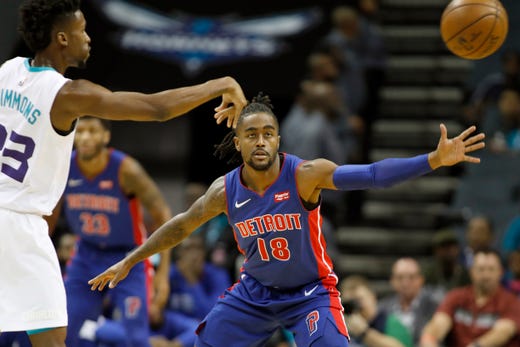 Jordan Bone: Age: 22. Ht: 6-5. Wt: 180  Outlook: After spending three years at Tennessee, including an All-SEC selection last season, with 13.5 points, 5.8 assists and 36 percent on 3-pointers, he was a second-round pick and could be a good developmental prospect as a point guard. He has freakish athleticism but will have to develop an outside shot as well. Bob Leverone, Associated Press
Fullscreen 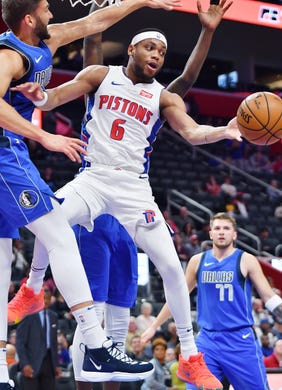 Bruce Brown: Age: 23. Ht: 6-5. Wt: 202. 2018-19 stats: 4.3 pts, 2.5 rebs, 26% 3FG. Outlook: Brown became a fixture in the starting lineup as a rookie but will need to pick up his 3-point shooting and finish better at the rim. He’s worked to become a better ballhandler and facilitator, which could earn him more playing time. Clarence Tabb Jr., Detroit News
Fullscreen 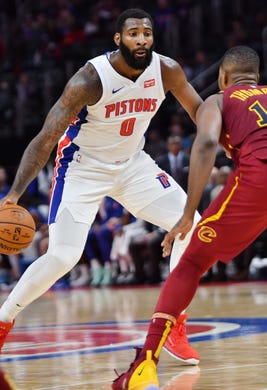 Andre Drummond: Age: 26. Ht: 6-11. Wt: 280. 2018-19 stats: 17.3 pts, 15.6 rebs, 1.7 blks. Outlook: Drummond had another dominant season on the boards and showed some improvement on both ends of the court, including as a rim protector. He could see more action as a perimeter passer, which will increase his assists. Clarence Tabb Jr., Detroit News
Fullscreen 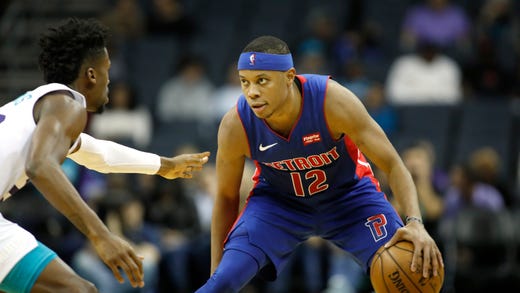 Tim Frazier: Age: 28. Ht: 6-1. Wt: 170. 2018-19 stats: 5.3 pts, 2.8 rebs. 4.2 assts, 37% 3FG. Outlook: In previous years, he has been a serviceable starter and valuable backup but he’ll likely play limited minutes as the third point guard. He’s the best option the Pistons have had in a while and he’s insurance in case of a Jackson or Rose injury. Bob Leverone, Associated Press
Fullscreen 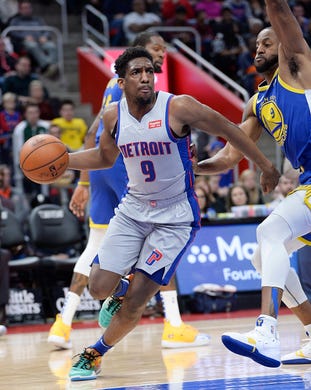 Langston Galloway: Age: 27. Ht: 6-2. Wt: 200. 2018-19 stats: 8.4 pts, 2.1 rebs, 36% 3FG. Outlook: His streaky shooting is well noted, but he still has a valuable role on the team with his ability to hit from the outside. He played significant minutes in the preseason, which suggests he’s still in the rotation, but has competition with Svi Mykhailiuk and Khyri Thomas. Clarence Tabb Jr., Detroit News
Fullscreen 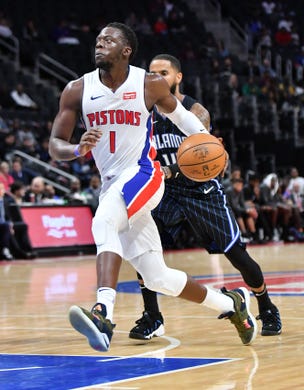 Reggie Jackson: Age: 29. Ht: 6-3. Wt: 208. 2018-19 stats: 15.4 pts, 4.2 assts, 37% 3FG. Outlook: After a healthy season in which he played all 82 games, Jackson has a different role, playing more off the ball as a spot-up shooter. From January on, he had a very solid season. He still has some pick-and-roll effectiveness but in small spurts than previous years. Robin Buckson, Detroit News
Fullscreen 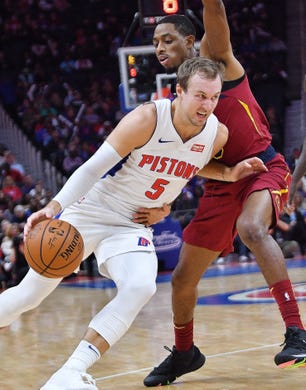 Luke Kennard: Age: 23. Ht: 6-5. Wt: 206. 2018-19 stats: 9.7 pts, 2.9 rebs, 39% 3FG. Outlook: In his third season, Kennard is poised for a breakout and will have a solid complementary cast in the second unit. He has the green light to shoot, but he’ll also help by facilitating and being selective in which ones he takes. Clarence Tabb Jr., Detroit News
Fullscreen 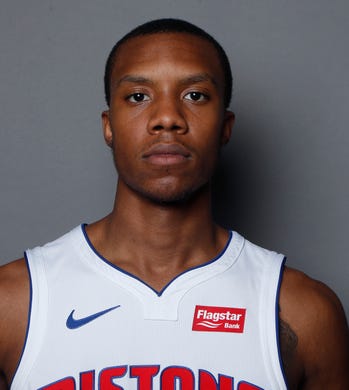 Louis King: Age: 20. Ht: 6-9. Wt: 205. Outlook: He played just one season at Oregon and posted 13.5 points, 5.5 rebounds and shot 39 percent on 3-pointers. He’s still adding muscle and learning to play on an NBA level, but he’ll get plenty of time to work on his game with the Grand Rapids Drive.  Carlos Osorio, Associated Press
Fullscreen 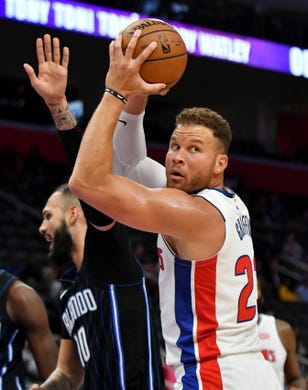 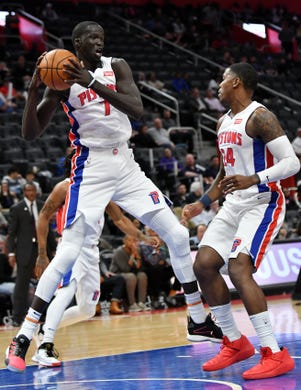 Thon Maker: Age: 22. Ht: 7-1. Wt: 221. 2018-19 stats: 5.5 pts, 3.7 rebs, 31% 3FG. Outlook: With a summer focused on getting stronger, Maker will look to carve a niche as more than just a perimeter big man. That also will help him in defending the paint, as he can get pushed around by bigger opponents inside. Robin Buckson, Detroit News
Fullscreen 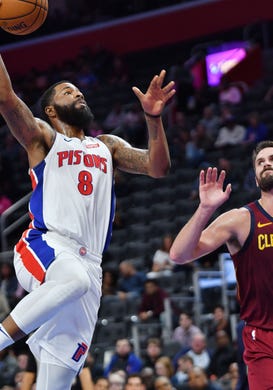 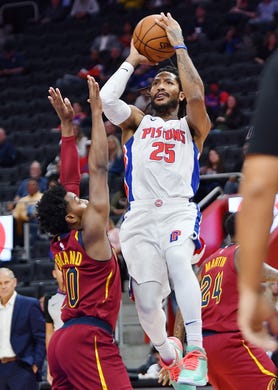 Derrick Rose: Age: 31. Ht: 6-3. Wt: 200. 2018-19 stats: 18 pts, 4.3 assts, 37% 3FG. Outlook: Last season in Minnesota, he showed that he still has some juice left but injuries limited him at the end of the year. Rose is healthy and will be the engine of the second unit with his scoring and quickness. His leadership will be an underrated addition. Clarence Tabb Jr., Detroit News
Fullscreen

Sekou Doumbouya: Age: 18. Ht: 6-9. Wt: 230. Outlook: The rookie didn’t get much time in Summer League nor in the preseason, and he’s most likely destined for some time in the G League with the Grand Rapids Drive. He’ll look to get stronger and adapt to the pace and rigor of the NBA. Carlos Osorio, Associated Press
Fullscreen 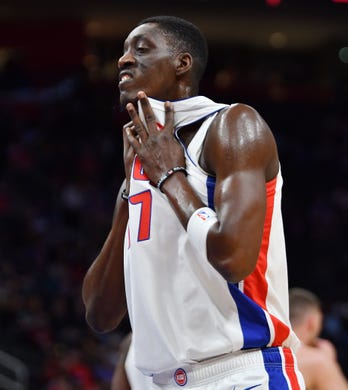 Tony Snell: Age: 27. Ht: 6-7. Wt: 213. 2018-19 stats: 6 pts, 2.1 rebs, 40% 3FG. Outlook: He’ll step into the starting lineup as an adept 3-point shooter and solid defender and bring some stability to a position that’s been a revolving door for a couple years. He’s been active and ready to shoot in the preseason, which bodes well. Clarence Tabb Jr., Detroit News
Fullscreen 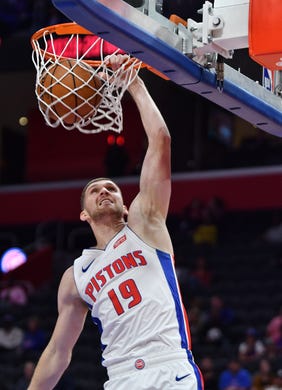 Svi Mykhailiuk: Age: 22. Ht: 6-8. Wt: 205. 2018-19 stats: 2.0 pts, 1.3 assts, 50% 3FG. Outlook: After a summer to get acclimated, Mykhailiuk looks more comfortable in the offense and has improved on the defensive end. He’s getting more playing time but will have to take another step to move into the regular rotation. Clarence Tabb Jr., Detroit News
Fullscreen 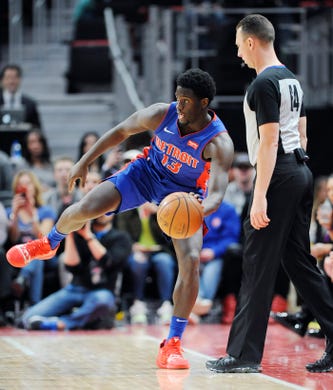 Khyri Thomas: Age: 23. Ht: 6-3. Wt: 210. 2018-19 stats: 2.3 pts, 0.8 rebs, 29% 3FG. Outlook: He played sparingly in the preseason and with so many experienced guards, Thomas has fallen down the depth chart. In his second season, he’ll have a lot to prove but will have to compete for playing time. He could spend more time in the G League to get some seasoning. Clarence Tabb Jr., Detroit News
Fullscreen 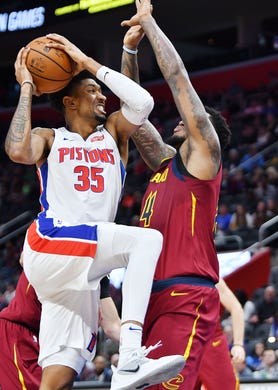 Christian Wood: Age: 24. Ht: 6-10. Wt: 214. 2018-19 stats: 8.2 pts, 4 rebs, 1.3 blks, 35% 3FG. Outlook: After an excellent preseason, he earned the final spot on the roster and looks to be a valuable addition. His active presence around the rim and scoring ability was impressive and he could log plenty of minutes as Drummond’s backup or as a perimeter power forward. Clarence Tabb Jr., Detroit News
Fullscreen

The news of Griffin’s injury is cushioned somewhat by the Pistons’ decision Monday to keep big man Christian Wood on the roster for added frontcourt depth. Wood, at 6-foot-10, can play either forward or center and will be able to handle some of the minutes created by Griffin’s absence.

“He’d better respond in an appropriate way because it’s a fine line in this league — stay hungry and stay with that chip on his shoulder,” coach Dwane Casey said. “He had the chip on his shoulder: he wasn’t late, he was a professional, he was mature and he was consistent. Those were the questions about Christian — it never was about his talent.”

“The jury is still there and that’s why he has to stay on his p’s and q’s and I have all the confidence in the world that he will.

Outlook: Without Blake Griffin, the Pistons will have to adjust to a new normal, possibly with Markieff Morris in the starting lineup. The Pacers will be without All-Star guard Victor Oladipo (knee injury) at least until December.

John Niyo and Rod Beard preview the 2019-2020 season for the Detroit Pistons on Pistons Backcourt. The Detroit News