What if the first-round playoff exits in 2016 and 2019 are as good as it gets with this group?

The Pistons have lost four straight and are reeling in the early part of an injury-riddled season. The Detroit News

Detroit — In the 1997 hit movie, “As Good As It Gets,” Jack Nicholson’s character, Melvin Udall, has obsessive-compulsive disorder and is trying to go through techniques with his therapist to improve his condition.

He shows up unannounced to try to get an appointment, but his therapist refuses to see him.

Frustrated, Udall wanders into the waiting room and rhetorically asks the other patients: “What if this is as good as it gets?”

The classic query from Udall has been a frequent refrain via Pistons’ fans email and social media — as well as social gatherings with friends, associates and other happenstance encounters with strangers.

Even with Blake Griffin for the past two seasons, there hasn’t been a huge uptick. Andre Drummond had a hot statistical start to the season, but many fans feel that he hasn’t impacted winning significantly enough to warrant another long-term deal.

This season, with the addition of Derrick Rose and a seemingly weaker Eastern Conference, the Pistons have struggled out the gates with a 4-9 start, a drop-off from going 7-6 last season and 10-3 in 2017-18.

What if the first-round playoff exits in 2016 and 2019 are as good as it gets with this group?

Injuries have been a major concern with two starters, Griffin and Reggie Jackson, each playing in just two of the first 13 games. Rose and Tim Frazier have missed five games each, forcing coach Dwane Casey to use a piecemeal playing rotation to try to hold on until the roster gets healthy.

Griffin’s 10 seasons of experience have helped show there’s no panic because of the slow start to the season.

“Obviously, we have to be better, but we go on a five- or six-game win streak and we’re back to .500,” Griffin said Friday. “We have a little break in our schedule and some time to practice and time to get guys healthy.

“We need to use this time wisely and be ready to go for the next stretch.”

Some of the doom and gloom is hyperbolic. Even with their poor start, the Pistons are only two games behind the Charlotte Hornets, who are in seventh in the East. Somewhat predictably, the Celtics, Heat, Bucks, Raptors and 76ers are atop the East. After that, there is a jumble of teams with four or five wins.

It’s still very early in the season and the Pistons have tread water while Griffin got healthy, and now they must wait until Jackson is back to restore their desired starting lineup. 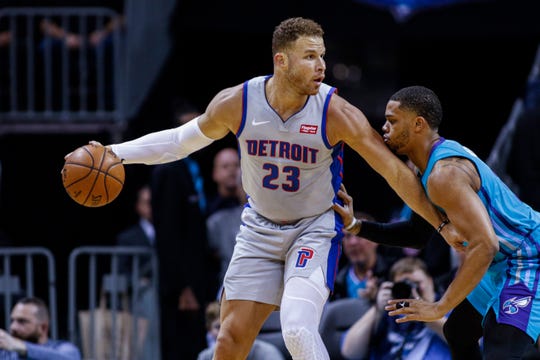 Even then, will it get that much better, or is this it? It’s too early to tell, but unless there’s a dramatic turnaround in December and January, the trade deadline see the Pistons more like the Titanic.

And that’s not good.

The Monday Drive provides some observations from the past week and week ahead:

► The Pistons have had to employ more zone defenses to compensate for their struggles with going man-to-man. It’s a necessary option that Casey doesn’t want to overutilize, but with such poor communication on the defensive end, it’s his best course of action.

► Langston Galloway’s career-high 32 points on Friday were a revelation of how important he’s become in the offense. On their final possession where they were looking to get the lead, the Pistons were looking to get Rose to drive and possibly set up Galloway for a 3-pointer in the opposite corner. Once seen as a fringe reserve, Galloway has been solid all season, averaging 13.2 points and shooting 46 percent beyond the arc.

► The Pistons are hemorrhaging with turnovers, averaging a league-worst 17.5 this season. That, along with allowing 48 percent on opponents’ field goals, are the biggest indictments on their slow start. Casey has lamented the live-ball turnovers that lead to easy transition opportunities on the other end.

► Coupled with the turnovers leading to easy baskets, the Pistons also are missing the chances to score on their own. They lead the league in 3-point percentage (40.5 percent) and they’re fifth in field-goal percentage, which would bode well if they were able to convert those turnovers into actual shot attempts.

► Two-way players Jordan Bone and Louis King and first-round pick Sekou Doumbouya have been lighting it up with the Grand Rapids Drive in the G-League. Bone is posting 20.3 points and 9.5 assists and shooting 42 percent on 3-pointers, and Doumbouya 16.6 points, 3.6 rebounds and 36 percent beyond the arc. King is at 19.2 points and seven rebounds. They may not get much time with the Pistons this year, but it bodes well for their development.