In the first few weeks of the season, the Pistons had played more games than any other team in the league. 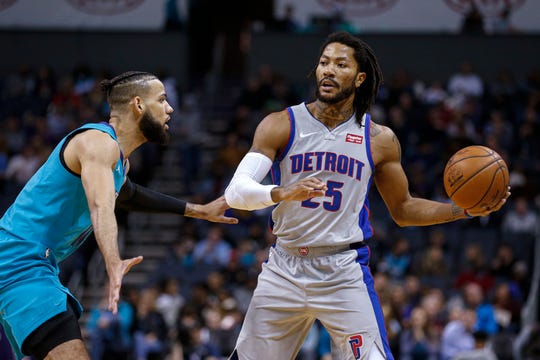 Detroit — Eventually, the Pistons’ schedule was going to have to slow down in order to let the rest of the league catch up.

In the first few weeks of the season, the Pistons had played more games than any other team in the league, with a condensed schedule that included three back-to-backs and two spans of three games in four nights. Through their first 12 games, they had only one stretch with two consecutive days without a game.

After Friday’s loss at Charlotte, the Pistons had four straight days off, marking their longest streak of off days until the All-Star break in February. Coach Dwane Casey was happy just to get a couple of days to relax and kick back, instead of preparing for another game in a string.

Because of the tight schedule, the Pistons weren’t able to get Blake Griffin and Derrick Rose back into the mix quickly, as they are being conservative with trying to play them too many minutes in a short time span.

With Saturday off and three practice days following, the Pistons were looking to chip away at some of the issues, most notably on the defensive end, where the Pistons rank among one of the worst teams in the league through the first part of the season.

“We worked on a lot of defense and that was our main focus — defensive intensity,” Casey said. “We accomplished what we needed to accomplish in the days we had. Blake and Derrick got good work in, which are the two guys who had limitations with practice and game minutes.

“I’m excited about what we got accomplished.”

While the Pistons (4-9) had been moving along at a gazelle’s pace, the rest of the league was playing catch-up, with only five teams having played 12 games or fewer heading into Tuesday's action.

Casey didn’t like the odd spread of the schedule, but he treated the early part of this week like a mini-training camp where he could focus on some fundamentals, such as making better passes to reduce turnovers and improving communication on defense.

He said he was more accustomed to typical schedules, with just a day or two between games, but even getting four days off can take a team out of a rhythm. In the Pistons’ case, the other benefit is letting some injuries heal.

Besides Griffin and Rose, Tony Snell has been dealing with a left hip flexor and missed two practices before returning to do limited work on Tuesday.

Luke Kennard has been off to a remarkable start, averaging career highs of 17.8 points, 4.2 assists and 3.8 rebounds in 33.9 minutes. He’s been starting out of necessity because of the injuries to Rose and Griffin, but he’s taken a big step in his development with the increased opportunity.

“I’m a little bit but not surprised. We’re excited about it and I knew it was going to be a step-forward year for him,” Casey said. “There are a couple more levels he can get to by continuing to work, get stronger and getting in great physical condition and handling games like he did the other night.

“In the mental part of the game, he’s doing a much better job this year, which is a big step for him, just as much as the numbers.”

Against the Hornets, Kennard was double-teamed and they geared the defense to get the ball out of his hands. The strategy proved effective, as Kennard had a season-low five field-goal attempts and just five points, his second-lowest total of the season.

Casey found a silver lining in those numbers, because Kennard didn’t get discouraged and continued to look for his teammates, making an impact without scoring.

“A lot of teams are giving him shots but Luke is doing a great job. He was a plus-18 (in plus-minus rating) because he did a great job distributing and finding people. That may be his lot in life until they stop blitzing him,” Casey said. “He’s done such a good job shooting the ball and coming off in pick-and-roll. He’s got the (opposing) team’s respect and now the other team has to make a decision. I was proud of the way he accepted that.

“A lot of times with young players getting blitzed and the ball taken out of their hands, it lessens their shots and they get frustrated and disoriented. He didn’t; he handled it very well.”

Outlook: The Bulls (4-10) have lost three straight games, including the last two at home. Blake Griffin and Derrick Rose look to be ready to increase their workload as the Pistons will have the first of three games in four nights.