Pistons mailbag: Turnaround better happen soon or playoffs will be in peril

Fix one thing and another thing breaks. The Pistons this season remind me of that old Dodge Shadow.

Pistons mailbag: Turnaround better happen soon or playoffs will be in peril

Detroit — When I got my first car, I was excited for all the possibilities of being able to get around on my own and get back and forth to work reliably.

It was a used Dodge Shadow, and as much as I liked that car, it became a nuisance after a couple of years. Every time I got something fixed, something else broke: carburetor, alternator, hoses, belts … it was always something.

Fix one thing and another thing breaks.

The Pistons this season remind me of that old Dodge Shadow.

They started the preseason with few injury concerns, but before the regular season shifted to drive, their stars were getting repairs. Blake Griffin, Reggie Jackson and Derrick Rose each missed significant time. Down went Tony Snell and in came Svi Mykhailiuk. Out went Tim Frazier, pushing Bruce Brown into the starting group.

The hope for coach Dwane Casey is that the extra experience for some of the younger players would pay off down the road, with the additional playing time speeding up their maturation process and potentially helping later in the season, when the rotation is back at full strength.

With the Pistons’ 6-11 start, the season is teetering; they need to get things turned around quickly and start stacking some wins. Remarkably, they haven’t won two straight games this season, but they’re getting to a stretch of their schedule where that becomes increasingly probable.

But when the schedule difficulty ramps up, they’ll need to be at full strength to prevent a stumble and to keep the playoffs as a possibility.

This week’s Pistons mailbag looks at some of the concerns around the start and the outlook given the injury issues.

►Question: How important are the next four games for the Pistons? Magic, Hornets, Hornets, and Spurs. -- @Reiter98

►Answer: In the long term, any four-game stretch isn’t very important; it won’t make or break their season. Given their disappointing start, they would do well for themselves to get back closer to .500 — and after beating the Magic on Monday night, they could get on a roll. They lost to the Hornets on a buzzer-beater two weeks ago, and with Griffin and Rose back healthy, it is reasonable to think they could win both games in the home-and-home, at Charlotte on Wednesday and in Detroit on Friday.

Add in a matchup against the struggling Spurs on Sunday and the Cavaliers next Tuesday, with some consistent play, they could close within a game or two of .500 within the next week.

►Q: Holiday: What's on your perfect Thanksgiving plate? Basketball: What do you think of the Thon Maker-Christian Wood pairing? -- @lazchance

►A: It’s going to have to be a large and sturdy plate because I’m piling turkey and dressing — it’s not called stuffing in my house — along with collard greens, deviled eggs and a chicken-shrimp gumbo-like dish. That’s the first trip. The second heaping helping is going to have ham, more greens, and definitely more chicken and shrimp. Finish it off with some sweet potato pie — not pumpkin pie in my house — and a cup of coffee. Nap time.

The Maker-Wood pairing is passable for short spurts, but only against certain opposing centers. Wood is the better post defender and the more versatile offensive threat in the paint, but Maker is starting to do some things on the offensive end as well. When Andre Drummond is in foul trouble, it makes things harder, and in a perfect world, Casey would love to have either Drummond or Griffin (or both) on the floor at all times. 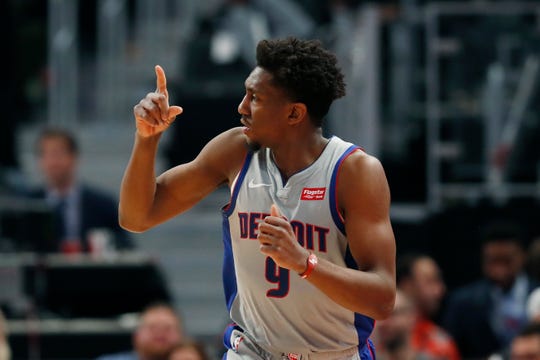 ►Q: At what point do you think the Pistons will make a move to either rebuild, or make another playoff push by adding another star? -- @BlakeStackpoole

►A: It feels like the six-game western trip in late-December to early January will be a big test for them. They’ll have the Spurs, Jazz, Clippers, Warriors, Lakers and Cavs on that trip, and going 3-3 in that stretch seems plausible. If their overall record can be at .500 after that, they could be convinced that they could make the playoffs as currently constituted, if they can get healthy.

By the trade deadline in February, they’ll have to make a decision about whether to keep this group together or try to look to the future. I don’t know how they can add another “star” outside of maybe dealing some of their young talent and parting with the expiring contracts of Reggie Jackson and Langston Galloway, which doesn’t seem likely because Jackson is hurt and Galloway is playing the best ball of his career.

►Q: What is your personal opinion of the Pistons' new jerseys and what would you like to see for our “Earned” editions? -- @RedAlternates

►A: I’ve been told that there are no plans to have an Earned Edition jersey this season. I think that would be a good opportunity to think out of the box with a completely different color scheme, similar to what the Miami Heat did with their “Miami Vice” theme. The bottom line is that jerseys don’t win games — and at this point, that’s what fans care about most. Jersey sales are cool, but whatever they’re wearing, the playoffs would be received much better.

I was never a fan of the two vertical stripes on the past couple of jerseys they had. The red and blue is at least getting back to their traditional roots in terms of color scheme. The mock-up with black jerseys and one red and one blue stripe were cool to me and would have been more out the box, but again — wins are what matter.

►A: I’ll address this more on the Rod & Real podcast this week, but the struggles that one Detroit team is having shouldn’t bleed over into the others. It’s actually a sports talk-driven talking point to get people riled up … about something.

Outlook: The Hornets (6-12) won on a buzzer-beater on Nov. 15 but have gone 1-5 since. The Pistons (6-11) are getting healthy but haven’t won on the road since the season-opening victory over the Pacers.