It’s a big step for the Pistons, who have leaned a bit more on their second unit than they had planned in the offseason.

Detroit — The numbers were stark and surprising, a sure harbinger that the Pistons had little chance to win the game. 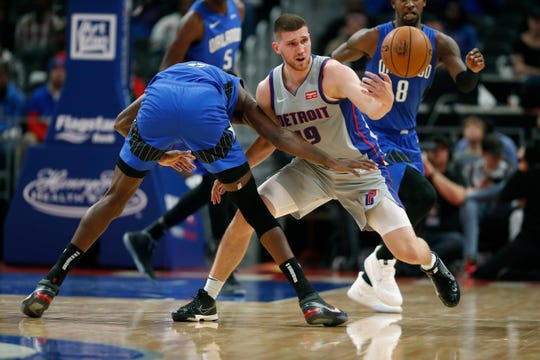 Somehow, the Pistons managed to get a second straight lopsided victory on Monday, diffusing the Orlando Magic by 15 points.

The other numbers were the more encouraging sign: Langston Galloway scored 12 points, reaching double figures for the 13th straight game, the longest streak of his career. Bruce Brown had 13 points and seven assists and Svi Mykhailiuk tied his career high with 12 points, all on 3-pointers. Christian Wood had 12 points in 15 minutes, getting some playing time along with Thon Maker.

It’s a big step for the Pistons, who have leaned a bit more on their second unit than they had planned in the offseason. Brown, Galloway and Luke Kennard have moved into the starting lineup and Mykhailiuk has seen an uptick in his playing time.

Carving out more minutes and bigger roles for the role players, even in the short term, can pay dividends later in the season, if everyone can get healthy. There didn’t appear to be as many opportunities, but the injuries have provided some revelations.

“It’s huge. Our bench has been a little discombobulated because of our injury situation,” coach Dwane Casey said after Tuesday’s practice. “Once we do get back (fully healthy), we’re going to have one of the top benches because of that, with Svi’s growth, Christian’s growth, Thon’s growth and Markieff (Morris) and Derrick (Rose) in that group.

“Our second group is going to be what we expected (earlier) during the season.”

The Pistons are trying to manage while Blake Griffin and Rose get back into regular playing shape but it’s requiring bigger contributions from some unexpected sources and that would be a big boost as the Pistons look to climb out of the early hole in the first part of the season and get back to .500.

“It’s growth of a team. We have guys who are capable of doing that. We’ve been preaching in practices and film sessions that as long as we get that win and play the right way, we can’t worry about stats as a team,” Griffin said. “Guys’ worth is more than the points column in the box score.”

Mykhailiuk on the rise

Mykhailiuk has steadily improved this season, with more opportunity and playing time. In the last four games, he’s averaged 6.5 points and has looked more comfortable and into the flow of the game than the short-term stints he had previously.

It’s more than just on the offensive end, though. Mykhailiuk had a tough defensive assignment on Terrence Ross and after a big first half with 14 points, Mykhailiuk helped hold Ross to 2-of-6 shooting in the second half. More than that, he got on the floor for loose balls and made some hustle plays that aided in keeping the lead.

“The defense was far more (than we thought). We know who Svi is offensively; the major challenge has been the defensive end and understanding,” Casey said. “He still had a lot of mistakes but he made up for it with hard play and competing.”

Because of all the injuries, Mykhailiuk has been able to settle into more playing time but he’s not relaxing, knowing there’s still more to learn and figure out if he’s going to maintain those minutes when the rotation is healthy.

“You’ve always got to be focused and know what you’re doing and when somebody’s out, I feel like you’ve got to … be even more ready because there are less guys,” he said. “You’ve got to be more prepared and pay more attention to the details.”