Beyond the complex issues of balancing huge contracts with returning value in a trade, Pistons owner Tom Gores doesn’t appear to be in fire-sale mode.

Just when the Pistons were starting to get into a groove, they ran into more adversity.

With Saturday’s surprising road win over the Houston Rockets, the Pistons won for the fifth time in the last seven games and notched their best win of the season.

Before the game, Andre Drummond was ruled out because of inflammation in his left eye, a residual effect from an allergy scare with avocados.

Blake Griffin, who missed the first 10 games of the season and was starting to round into form, had a setback when he left in the first half because of a knee injury and didn’t return.

The Pistons (11-15) are stuck in the NBA purgatory of potentially being good enough to make the playoffs but with a record that won’t get them home-court advantage in the first round. With Sunday marking the first day players who signed free-agent contracts in the offseason could be traded, the league is gearing up for front offices to start making moves to improve their rosters. 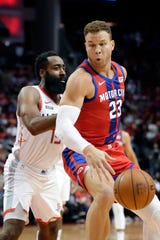 A cynic would claim that the Pistons’ win on Saturday was a precursor to their future, looking to jettison Drummond and Griffin before the February trade deadline and paving the way for a substantial roster rebuild.

Beyond the complex issues of balancing those huge contracts with returning value in a trade, Pistons team owner Tom Gores doesn’t appear to be in fire-sale mode. The extent of Griffin’s injury — and his outlook — are unclear and if anything, another injury setback would depress his trade value, making it much less likely.

Fans are frustrated by the continuous cycle of mediocrity but after this season, there is some potential for change. The contracts of Reggie Jackson ($18.1 million), Langston Galloway ($7.3 million), Josh Smith (5.3 million), and Thon Maker ($3.6 million) could be coming off the books, if they’re not traded before the deadline.

Drummond could opt out of his $28.8 million, creating plenty of room for the Pistons to go in a different direction with the roster, potentially toward a youth movement and seeing more of rookies Sekou Doumbouya and Jordan Bone, plus some additional time for Christian Wood and Svi Mykhailiuk.

It doesn’t seem that this is the way things will go, though. What’s more likely is that the Pistons look at the standings and wonder whether they can persevere. With myriad injuries to start the season, they’re only a game behind the Magic for the last playoff spot.

Though they have the most difficult strength of schedule after the All-Star break, they could see themselves still in contention to make the playoffs. Griffin’s uncertainty brings more questions than before and they’d have to be uncharacteristically proactive to decide to pull the plug now instead of waiting until February to make a decision.

If the Pistons decide to tank and go for a better draft pick, they’d have some ground to make up. The Warriors have just five wins, and the Pelicans, Cavaliers, Knicks and Hawks have only six. They’d have to turn the Titanic toward losing — and that still wouldn’t guarantee a top pick.

Unless something changes, it looks to be another potential push toward a playoff spot.

And that’s okay, at least for right now.

The Monday Drive takes a look at some developments from this week:

► In his second season, Bruce Brown has distinguished himself as a very good perimeter defender. Although James Harden had 39 points on Saturday, he needed 33 field-goal attempts to get there. Brown shared duties with Tony Snell, but Brown is earning his playing time on the defensive end.

On a night he scored 39, here’s what James Harden did when guarded by @BruceBrown11 last night…

Brown had one of his best all-around games, with 16 points, 10 rebounds, six assists and four steals, but when Jackson returns to the starting lineup, there might be some shifting to find the right spot for Brown.

► If Griffin misses any games, Markieff Morris likely will move back into the starting lineup in his place. Morris has been solid off the bench, especially from beyond the 3-point line, and the next piece could be Maker as the next forward off the bench. Maker has struggled, but if they manage his minutes effectively and play him more with Drummond, the issue could be mitigated.

► In seven games in December, Galloway is shooting 47 percent (17-for-36) on 3-pointers and has played solid defense. He’s found a larger role in the rotation and is playing much bigger than his 6-foot-1 frame. If nothing else, he’s raised his potential trade value. But more than that, he’s showing himself valuable in case the Pistons choose to go for a playoff spot instead.

► In December, Wood is posting some good numbers: 12 points, 6.9 rebounds and 40 percent on 3-pointers. He’s moved ahead of Maker in the rotation, and he’s making an impact with his athleticism around the rim.

This is bananas by #Pistons Christian Wood, who has many of the team's best dunks this season.

► Doumbouya is making strides with the Grand Rapids Drive, but isn’t quite ready to make the jump back to the Pistons — not yet. He’s still showing what that will look like in the future, though.

Sekou doing hoodrat things with his friends. Word to @detnewsRodBeardpic.twitter.com/QVm9lZlV1K

Outlook: The Pistons (11-15) are surging, with five wins in their last seven games, but injury concerns with Blake Griffin (knee) and Andre Drummond (eye) cloud the starting lineup. The Wizards (7-17) have lost four straight.