Losing the easy ones puts Pistons behind the 8-ball

Through the first quarter of the season, the Pistons had one of the easiest schedules in the NBA but weren’t been able to take advantage of it by building a resume of victories.

Losing the easy ones puts Pistons behind the 8-ball

Detroit — Through the first quarter of the season, the Pistons had one of the easiest schedules in the NBA but weren’t been able to take advantage of it by building a resume of victories.

At 11-16, the Pistons have been disappointing, having just six wins over teams with losing records. That includes victories over the Knicks, Hawks, Magic, Spurs, Cavaliers and Pelicans. On paper, all of those are games they should win. 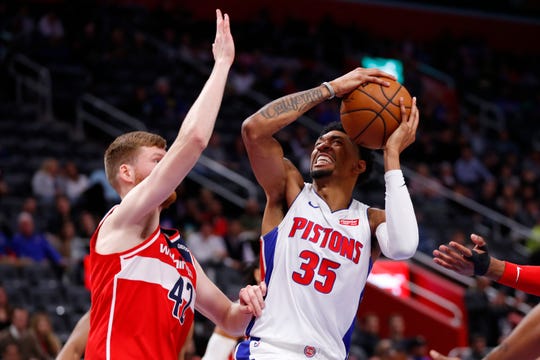 The Pistons' loss to the Wizards Tuesday was their latest to a team below them in the standings. (Photo: Paul Sancya, AP)

In order to reach the playoffs, they’ll need to get plump off the losing teams, but coach Dwane Casey says the disappointment is that they played well on the road to beat the Rockets but didn’t bring that level of intensity to play at home against the struggling Wizards.

“We’re one of those teams below .500, so every team we have to treat with the same amount of respect. No disrespect to Washington, but we have to treat them like Houston,” Casey said. “We have no right to treat anybody different, above or below .500. We have to take care of business every time we walk and playing hard and doing the right things is a habit. That’s what we’re trying to build is that culture.”

Casey insists that the Pistons need to make a clear distinction — that they’re not above those teams, because they’re in the mix with them, sitting below .500.

More: 'We couldn't get stops': Depleted Pistons get steamrolled by Wizards

“We haven’t done anything to say we have to beat the bad teams because guess what — we’re below .500, so we have to be the hungry dogs every time we’re in the hunt and if not, it’s going to be up and down,” Casey said. “We have to have that same mentality each and every night against above and below.

“I don’t think we’re at the state of our program where we can look at above and below; we have to go out and develop those habits each night.”

Against teams with winning records, the Pistons are 5-7, with three victories over the Pacers and one each over the Nets and Rockets. Of their next 10 games, six come against teams with records above .500, including the western trip at the end of the month, with road games against the Jazz, Clippers and Lakers.

On their way back

Blake Griffin, who missed the last game and the second half of the Rockets game, is listed as day-to-day because of soreness in his left knee. Griffin did some one-on-one work in the late portion of Tuesday’s practice that was open to the media.

Andre Drummond also did some work in practice after missing the last two games because of eye inflammation. He’s been unable to insert his contact lenses because of the inflammation and time was the solution that team doctors could suggest.

“We’ll see if he can go (Wednesday) night, and the same with Blake,” Casey said. “It should be a full boat, but we’re not going to make that commitment until game time.”

The Pistons announced a partnership with Rocket Fiber, which will be the technology partner for internet and network services for the team’s practice facility, the Henry Ford Detroit Pistons Performance Center.

With the deal, Rocket Fiber will hold naming rights for the broadcast studio at the practice facility, which provides the opportunity for fans and the general public to see the studio from the street level.

Outlook: The Pistons (11-16) continue their up-and-down trek, losing to the struggling Wizards on Monday after their best win of the seasons, topping the Rockets. Andre Drummond (eye inflammation) and Blake Griffin (knee soreness) are listed as questionable after missing the last game.