Beard: Western trip could determine if Pistons season will be a flop

Beard: Western trip could determine if Pistons season will be a flop

The Pistons’ longest road trip of the season didn’t get off to the start they had hoped. With their 136-109 loss to the San Antonio Spurs, they set a new mark for the most points allowed during regulation in a game since 1994.

With three more games against winning teams — at the Utah Jazz and the Los Angeles Clippers and Lakers this week — along with matchups against the Golden State Warriors and Cleveland Cavaliers, the next stretch of games could go a long way in determining the trajectory of their season. 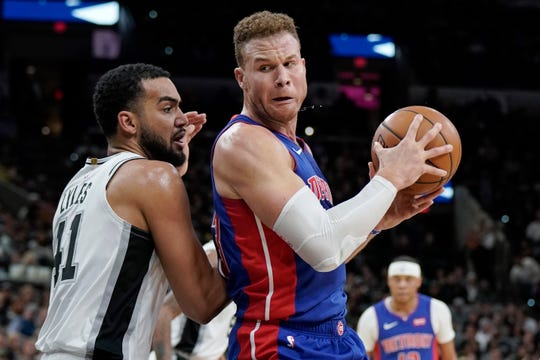 At 12-21, the Pistons are hurtling toward missing the playoffs for the second time in the last three seasons and the signs are starting to point to a bigger rebuild than just tinkering at the trade deadline. Falling a couple more games below .500 could signal to team owner Tom Gores that it’s time to pull the plug and look at dealing assets rather than scratching for the No. 8 seed again.

More: Frazier steps in in a pinch, assists Pistons with his outside shot

On the other hand, some surprising wins could send the sign that there is some kick left in this team and that they could get some more time to figure out what the long-term plan should be. The signs aren’t there, though.

Blake Griffin is struggling to find his effectiveness. Reggie Jackson has missed all but two games and his potential trade value has all but evaporated. Luke Kennard is set to miss at least two weeks because of knee issues. Markieff Morris and Bruce Brown are facing nagging injuries and are day-to-day.

With this Pistons squad, the issues are piling up daily, like the old Highlights Magazine subscription at the dentist’s office.

Many fans are looking to expedite the rebuild, pushing for more minutes for rookie first-round pick Sekou Doumbouya, as well as Jordan Bone and Louis King. It’s not bad to see what the young guys have.

That is, unless the team is still trying to make the playoffs and rebuild on the fly. It’s been the mantra for the past couple of years, but what happens when the rebuild doesn’t have any more blocks?

Playing the young guys typically doesn’t work that way, though — at least not this early in the season. There are teams that know they’re going to cast their lot in the NBA draft lottery and look to win a few games but lose a ton more in the process.

The Pistons aren’t one of those teams — at least not yet.

As the calendar turns to January, that could be the path forward for the Pistons, regardless of whether anyone wants to admit it. Yes, the bottom of the Eastern Conference is bad, but finishing eighth also means another likely first-round date with the Milwaukee Bucks. That has a predictable ending.

If the Pistons have aspirations for the seventh seed or higher, it’s an uphill climb. They’re 5½ behind the Brooklyn Nets for seventh and nine games from the Indiana Pacers for sixth.

It’s not impossible, but if that’s the goal, some things have to change — quickly.

Beginning the ascent on this western trip would be a good start.

The Drive takes a look at some developments from the past week.

► Blake Griffin remains in a shooting slump, especially on 3-pointers. The good news: he went made three from beyond the arc against the Spurs, ending a streak of 2-of-33 over a six-game stretch. The bad news: he was 3-of-10 in the game and some of them were bad misses.

► Griffin is showing signs that his knee still isn’t near 100 percent and it’s affecting all parts of his game. When he drives to the rim, he doesn’t have the explosion for a strong finish or beating his defender off the dribble. Griffin isn’t the same dominant player he was last season and some teams aren’t double-teaming him as much, which limits his effectiveness in creating open shots for others.

Casey didn’t want to comment on where Griffin is physically or what they’ve talked about in terms of his effectiveness.

► Brown is looking better in his role as a reserve guard alongside Derrick Rose. He has more freedom when he’s not handling the ball as much and has looked good in that spot. Defensively, the Pistons look to be suffering, though, not getting the same production on both ends from Tim Frazier and Svi Mykhailiuk in the starting spots.

► Kennard’s tendinitis in both knees looks to be an extended issue, that will keep him sidelined for at least the next two weeks. That provides more playing time and opportunities for Mykhailiuk, Langston Galloway and Tony Snell, but takes away one of their leading scorers during one of the most critical parts of the season.

►Jackson, who has missed all but the first two games of the season because of back soreness, is slated to be re-examined by a specialist while the team is in Los Angeles this week. He has been doing some light shooting during practice but isn’t yet ready for full-contact work. His initial timeline was late-December to be seen, but that has been pushed back.

Outlook: After one of their biggest wins of the season, the Pistons (12-21) floundered Saturday in a loss to the Spurs. The second game of the western trip features the Jazz (20-12), who have won seven of their last eight games.