Pistons mailbag: Window for Pistons to win with this group looks to be closing

With the trade deadline looming in February and no relief from injuries on the horizon, the Pistons find themselves in a tough spot, both for this season and in the years to come.

Pistons mailbag: Window for Pistons to win with this group looks to be closing

Los Angeles — The new year doesn’t bring a new outlook on where the Pistons are at this point in the season.

Lingering injuries, poor defense, lackluster third quarters and decreasing depth have turned the season into a struggle to which the optimistic scenario seems to be another trip to the playoffs as a No. 8 seed. 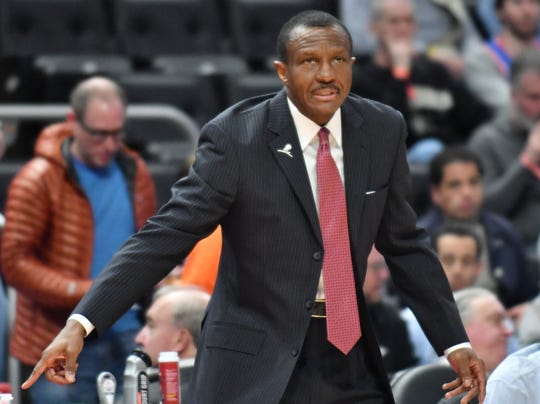 Given the roster that the front office and coach Dwane Casey inherited from the previous regime, they have made the best of a tough situation with some big contracts and a focus on big men Blake Griffin and Andre Drummond. (Photo: Robin Buckson, Detroit News)

That has a predictable outcome, especially if the Milwaukee Bucks repeat as the top seed.

With the trade deadline looming in February and no relief from injuries on the horizon, the Pistons find themselves in a tough spot, both for this season and in the years to come.

This week’s Mail Satchel breaks down questions about the current situation and how the Pistons can move forward.

Question: What Defcon level would you say the Pistons are on right now? 5 being "everything is fine" & 1 being "fire sell, everyone must go" — @Want3d_0utlaw

Answer: My guess would be 3. There seems to be a realization that this grouping might have reached its ceiling. Given the roster that the front office and coach Dwane Casey inherited from the previous regime, they have made the best of a tough situation with some big contracts and a focus on big men Blake Griffin and Andre Drummond.

They made some good additions in the offseason, with Derrick Rose, Markieff Morris and Tim Frazier but the roster depth has taken a hit because of the lingering injuries and multiple players missing multiple games, which has made it tough to gain chemistry with mismatch lineups.

They’ve played about half the season without two of their projected starters (Griffin and Reggie Jackson) and almost every player in the rotation has missed at least a couple of games because of injury, except Langston Galloway and Bruce Brown.

Injuries aside, the front office sees how to improve the roster, but will have more flexibility this summer, when some of the contracts are off the salary cap.

More: Pistons in the 2010s: Top stories from the past decade

Q: What’s your boldest take on what happens between now and the trade deadline for both the Pistons and NBA in general? — @J_Lawnicki

A: For the Pistons, I think the bold take is that they won’t make any big moves. They’ll try, but they will find it difficult to move either the contract of Griffin or Drummond. Jackson has been hurt all year and has very little trade value beyond the expiring contract for $18.1 million. If the playoffs are out of reach, they could trade Galloway’s expiring deal, possibly for a draft pick. Rose could be another trade piece, if a contender is looking to add some bench scoring.

For the NBA, it could be the opposite. There might be some bigger names moving because there isn’t a robust crop of free agents available this summer. Teams with attractive cap sheets and players with moveable contracts could get active, but some of the bigger names could be on the move, as teams start positioning for summer 2021, when several elite players will be available as free agents.

Q: Do you have a sense for how the front office views Christian Wood? He certainly looks great offensively. Do you think he’s a part of the long term plan now? — @FennisDembo11

A: Christian Wood has been a good find for the Pistons, who are playing him 16 minutes per game, much to many fans’ chagrin. He’s a talented big man but this summer will be interesting for his future. He’ll be an unrestricted free agent and the Pistons can’t extend his minimum deal.

The question is how much would they be willing to pay him as a backup, assuming they have Drummond back next season. If Drummond opts out of his deal and leaves, Wood would need to be more consistent to be considered an option as a starter. The talent is there but showing it on a night-to-night basis as a reserve this year could earn him a big payday in free agency.

Q: Which Detroit sports team do you think is closest to a championship team? — @JesseLeeShiv

A: Before the season, I unquestionably would have said it was the Pistons. They had a superstar at the peak of his career, some good complementary pieces and they were the most recent to make the playoffs. Imagine last year’s version of Griffin on this year’s roster. That would have been a top-5 seed in the East. But it wasn’t to be. Griffin’s knee issues and the poor start this season obviously point more to a rebuild than a title run.

Without knowing the Pistons’ long-term direction, it’s hard to say. The Tigers, though, look to have the talent coming through the minor leagues and could be within shouting distance, if it all comes together, in a few years.

Outlook: After a hot start, the Clippers (24-11) have leveled off, alternating wins and losses in their last eight games. Injuries have pushed the Pistons (12-22) to their lowest point of the season, with just two wins in their last 10 outings.