James is playing as many minutes as last season and he’s still producing, with 25.1 points, 7.7 rebounds and a league-leading 11 assists.

Los Angeles — In the summer of 2018, the Los Angeles Lakers got the biggest prize in free agency, when LeBron James joined them, ushering in a new era for the Lakers.

In the aftermath of his annual summer trips to the NBA Finals with the Cleveland Cavaliers and Miami Heat, the Lakers’ return to the echelon among the NBA’s elite teams was all but assured. 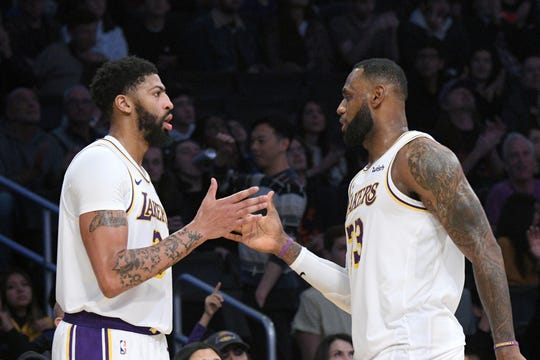 LeBron James (right) is leading the NBA in assists per game, and has been helped by the offseason addition of Anthony Davis (left). (Photo: Michael Owen Baker, Associated Press)

On Christmas Day 2018, the Lakers got an unwanted gift, when they lost James to a groin injury that kept him out for 17 straight games, putting a dent in their playoff chase, leading to their disappointing 37-45 finish.

Last summer, the Lakers added All-NBA big man Anthony Davis, creating one of the most potent pairings in the league, vaulting them among the favorites to win the NBA title this season. The Lakers (28-7) have lived up to the hype, touting the best record in a very competitive Western Conference.

And predictably, James is at the center of it all.

The Pistons get their first look at James in a Lakers uniform on Sunday, as he missed both matchups last season because of the injury and rest toward the end of the season. It’s a reprise of James dominating years with the Cavs and Heat but at age 35, it’s even more impressive.

James has missed just one game this season and although he’s nursing a different groin injury that he sustained last week, he’s still playing at a high level.

James is showing little sign of wearing down, due mostly to the meticulous care that he takes in maintaining his body, both physically and mentally.

“First and foremost, you have to be able to control the game from the mental aspect,” Lakers coach Frank Vogel said. “He was always able to do that as a young player — and particularly in his prime — but I think that’s boding well for him later in his career.

“Also, it’s the around-the-clock attention that he gives to his body just to make sure that he’s doing everything the right way to put his body in the best position to have success.”

The Lakers, in their first season under Vogel, are playing James as many minutes as last season and he’s still producing, with 25.1 points, 7.7 rebounds and a league-leading — and career-high — 11 assists.

The numbers are a statement on his impact with an All-Star-caliber player in Davis, but also his ability to catapult both himself and Davis into the conversation for league MVP. Having two MVP candidates on the same team is a rarity, reserved for the most elite teams, but with Davis and a cast of mostly the same players from last season, they’ve excelled.

Davis has elevated his game, leading the team with 27.8 points, 9.5 rebounds and 2.4 blocks. Beyond those two foundational cornerstones, the Lakers only needed to augment the roster with mercenary role players, which they did with an underrated signing of Danny Green from the Toronto Raptors, plus a shrewd addition of center Dwight Howard to bolster the depth of the frontcourt.

It’s a gumbo mix of talent, with a focus on defense, where the Lakers lead the league in blocks (7.1) and rank second in steals (8.6). Having Davis as a back-line anchor makes things easier n the perimeter and on pick-and-roll plays, he’s athletic enough to switch on to guards or stick with big men.

With the versatility on both ends with James and Davis, the Lakers can be flexible and with Green and Avery Bradley on the perimeter, they have become a better defensive team, allowing just 105.5 points per game, ranking sixth-fewest in the league.

The key to the Lakers’ season, though, will be whether they can even be the best team in their own arena. The Clippers are 25-12 and have their own dynamic duo in Kawhi Leonard and Paul George.

It's a script that hasn't been finished yet in Los Angeles, but with more than half the season remaining, there are still several plot twists and turns to go through before the NBA Finals story is done.

It'll be an interesting ride getting there, with James looking to play the leading role again.