Jalen Rose wants to join Pistons ownership down the road

Jalen Rose wants to join Pistons ownership down the road

Though he never played for the Pistons in his 13-year NBA career, Jalen Rose has always been somewhat synonymous with Detroit basketball.

The former Michigan and Detroit Southwestern star wants to make the relationship a little more official down the road. 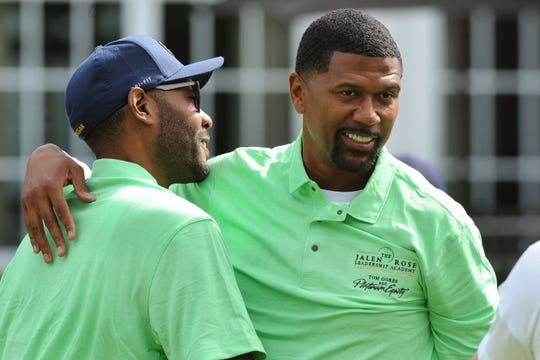 The ESPN personality and co-host of the network’s “Get Up!” morning show said on Wednesday’s episode of the “Sports Media With Richard Deitsch” podcast that he’d like to someday join Tom Gores' ownership group of the Pistons.

“I would love to be a minority owner with the Detroit Pistons,” Rose told Deitsch. “I feel like there’s a wealth of things that I could bring to the table.”

During Rose’s playing days with Denver, Indiana, Chicago, Toronto, New York and Phoenix, he was represented by Arn Tellem, the Pistons vice chairman.

Rose pointed to guidance from Pistons icons Dave Bing, the former Detroit mayor, and Isiah Thomas, whose post-playing days have included several business and sports management roles, as inspirations for his endeavors.

The Fab Fiver founded the Jalen Rose Leadership Academy charter school in northwest Detroit in 2011 and is often at Pistons home games at Little Caesars Arena. Gores is a supporter of JRLA, and Rose said he is friends with Gores and his wife, Holly.

“I applaud him bringing the team downtown,” Rose said. “That’s something that’d stood out to me, and another career opportunity that may or not present itself.

“Or it could be coaching on the collegiate or professional level.

Rose said he wants to stay with ESPN down the road, also adding production responsibilities to his on-air tasks.

“If they’ll have me, I’ll do this until I’m Hubie Brown’s age,” Rose said of his 86-year-old ESPN colleague.