Five Pistons who could be on move at NBA trade deadline

Rod Beard of The Detroit News takes a look at five Detroit Pistons who could be involved in trade discussions this week.

Five Pistons who could be on move at NBA trade deadline

Detroit — In previous years, the Pistons were straddling the line between being buyers or sellers at the trade deadline. When they were in position to contend for a playoff spot, they looked to add pieces; when they could get value for their players, they tried to trade them for future assets.

As the Pistons (17-32), who are 4½ games out of eighth place in the East, move into the final days before the Feb. 6 trade deadline, the picture seems to be very clear: They will be sellers. With some bigger contracts expiring this summer, they could be an interesting trade partner for a team that’s looking to add pieces to make their own playoff run. 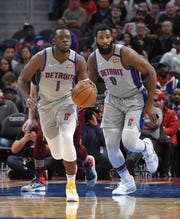 The Pistons' Reggie Jackson (1) and Andre Drummond are possible players on the move as the NBA trade deadline approaches next week. (Photo: Daniel Mears, Detroit News)

The Pistons could have as many as five or six players who have been or could be discussed in trade talks. It’s unclear whether the trade discussions will bear fruit and lead to actual deals, but the opportunity to move pieces, acquire draft picks or young talent and clear significant money off the salary cap could be there for senior adviser Ed Stefanski and the rest of the front office.

Here’s a look at five Pistons who could be involved in trade discussions this week:

Much like the past three or four seasons in early February, Drummond’s name is back in the trade winds. While some in previous years have been exploratory, the Pistons had serious talks with the Atlanta Hawks this month about moving Drummond for a reported package that included an expiring contract and potentially a draft pick or young rotation player. Talks broke down, although the Hawks could be a suitor if Drummond opts out of the final year of his contract, worth $28.8 million, and becomes an unrestricted free agent. The Knicks reportedly also were interested in Drummond, but there hasn’t been talk since those early rumors.

Drummond, 26, is in his eighth season and is the longest-tenured Pistons player, posting 17.2 points and a league-best 15.6 rebounds this season. Because of the uncertainty surrounding next season, teams might be scared away from trading good assets for Drummond, but he could be a boost to the right team, given a change of scenery and good surrounding structure.

► Trade likelihood: High. The Pistons would be wise to get whatever assets they could for Drummond, even if it’s just a second-round pick and an expiring contract. If they do nothing, he could leave this summer and they get nothing. 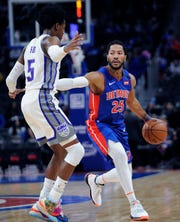 Derrick Rose (25) is having a resurgent season in his first with the Pistons, with 18.9 points and six assists per game. (Photo: Clarence Tabb Jr., Detroit News)

Rose is having a resurgent season, with 18.9 points and six assists per game. He’s been mostly healthy, playing in 42 of 49 games, with only a few games missed because of injury. Rose, 31, has moved into a starting role, where his minutes have increased significantly, but he has maintained the same level of production.

Rose, the No. 1 overall pick in the 2008 draft, has been beset by injuries for much of his career, but with his career renaissance — paired with the fact that he’s on an extreme-value contract of two years and $15 million, he could bring a nice return for the Pistons if they choose to deal him.

One potential issue is the Pistons don’t have another point guard signed for next season, and Rose has a strong relationship with Pistons vice chairman Arn Tellem, his former agent. Would the Pistons part with Rose, giving him an opportunity to go to a title contender such as the Lakers or Sixers, as has been rumored? The asking price could get pretty high, and a bidding war would only benefit the Pistons in a very handsome return package.

► Trade likelihood: Good. Draft picks don’t come along often, and if they can get a first-round pick for Rose, it could be the best value deal of all their prospects.

Jackson is back from a back injury that sidelined him for 41 games. He has little trade value because teams don’t know exactly how healthy he is, and at what level he could play for the remainder of this season. He’s in the final year of his contract, with $18.1 million expiring, which could be an enticing salary dump if a team is willing to make the move.

At age 29, Jackson isn’t what he was a few years ago because of knee and ankle injuries. He’s shooting 46 percent on 3-pointers and still can be an effective ball-handler in a pick-and-roll situation.

► Trade likelihood: Low. The injuries likely have scared off teams that would have been interested earlier this season.

Galloway is in the final season of his three-year deal for $21 million and at $7.3 million this season, he could be an attraction for a contending team. He’s shooting 40 percent on 3-pointers this season and is a good defender to be just 6-foot-1. There are rumblings that if the right team is interested, Galloway could return an early second-round pick or maybe even one late in the first round. Either would be a victory for the Pistons in trying to acquire more assets. Galloway is regarded as a pro’s pro in the locker room, so don’t rule out bringing him back as a veteran leader.

► Trade likelihood: Good, if the right teams are willing to make the move.

This might come as something of a surprise, but Kennard is due for a big payday in the next couple of seasons. If the Pistons aren’t completely sold that he can be a major building block for the franchise, they could decide to move him before giving him a huge contract. Injuries have limited his contributions this season, as he’s played in just 28 of 49 games because of knee tendinitis. When he’s healthy, he’s a big asset, with a career-high 15.8 points and a respectable 40 percent from beyond the arc.

► Trade likelihood: Good. Depending on the deal, Kennard could be a sweetener that helps move bigger contracts or helps bring back other young players or draft picks.

► Outlook: The Pistons (17-32) have lost five of their last six games and are falling in the East standings. The Raptors (33-14) have won eight straight overall and have claimed both head-to-head meetings this season