Svi Mykhailiuk doesn’t have any expectations for All-Star weekend beyond having fun and enjoying himself.

John Niyo and Rod Beard discuss the state of the Pistons after the trade deadline and what fans can expect without Andre Drummond in the lineup. The Detroit News

Orlando, Fla. — Svi Mykhailiuk doesn’t have any expectations for All-Star weekend beyond having fun and enjoying himself.

He won’t be on some exotic island enjoying the break; instead, he’ll be in playing in Friday’s Rising Stars Challenge in Chicago, where the forecast is for snow and sub-zero temperatures. It’s more of a working weekend for Mykhailiuk, the Pistons’ second-year wing, the only Pistons representative in the All-Star festivities at the United Center. 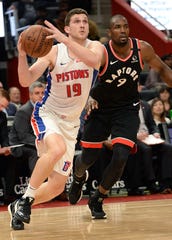 Pistons wing Svi Mykhailiuk is contributing 8.9 points, 1.7 rebounds and 1.7 assists for the whole season, but after he became a regular starter, the numbers increased to 12.9 points and 44 percent on 3-pointers. (Photo: Clarence Tabb Jr., Detroit News)

Mykhailiuk will be on the 10-player World Team headlined by Luka Doncic, Shai Gilgeous-Alexander and R.J. Barrett that will take on the U.S. team, which includes Trae Young, Zion Williamson and Ja Morant.

The Pistons haven’t had a player in the Rising Stars game since Kentavious Caldwell-Pope was on the sophomores team in 2015. Mykhailiuk sees it as an opportunity to be on the big stage, but hasn’t gotten any instructions on how he’ll handle it.

“Not yet. Maybe they will later on. I feel like it's just go there and have fun, enjoy being part of All-Star weekend,” Mykhailiuk said Wednesday. “It’s an honor and blessing just to be there and be a part of all the players who made it. I’ll enjoy it and make connections.”

It’s one of the few times that Mykhailiuk has been on a big national stage since he came to the Pistons from the Los Angeles Lakers at the trade deadline last season. The Pistons had a short stint in the playoffs in their four-game sweep to the Milwaukee Bucks, but Mykhailiuk had a much smaller role.

This season, he’s taken off, with 18 starts in his 46 games. He’s contributing 8.9 points, 1.7 rebounds and 1.7 assists for the whole season, but after he became a regular starter, the numbers increased to 12.9 points and 44 percent on 3-pointers.

Mykhailiuk missed the last five games because of a hip injury, but returned to the lineup on Wednesday against Orlando, to give him a tuneup before Rising Stars. The time off dulled some of the spark he had in putting things together but he’s ready to get back into a good rhythm.

“It’s all right. In basketball, stuff like that happens. It’s a great thing (the injury) wasn’t for that long,” Mykhailiuk said. “It was a really small thing, you know. I feel like it kind of gives you a little bit of rest in a good way and not a big thing.”

Since he last played, the roster has undergone some changes, with Andre Drummond being traded and the offense revolving more around big men Christian Wood and Thon Maker. With Mykhailiuk and Derrick Rose injured, it’s an unintended transition, but getting some scoring punch back on the wings will be a welcome addition.

“They've played really good lately, especially when they started the last games. They were really good on offense and defense, so I think it gave them confidence and gave us confidence that we know what they can do right now,” Mykhailiuk said. “With me and Derrick coming back, and Luke (Kennard) coming back, I feel like it's going to be really fun.”

With Drummond gone and the Pistons on a three-game skid, some of the expectation for the playoffs had died down, but Mykhailiuk still sees the postseason as a possibility, with a push in the last 25 games.

The Pistons had been hurt by injuries in the backcourt that kept Mykhailiuk and Rose sidelined and pushed Bruce Brown into more minutes as a starter and not many other options at shooting guard.

They got Rose and Mykhailiuk back in the lineup Wednesday and, although they were on a minutes restriction, having the extra options was a welcome boost to the rotation.

“It helps to have that. Tony (Snell) was doing a much better job of attacking the pick-and-roll and passing, but not like Derrick and Svi. That's going to be a plus, to see what they can do with that lineup,” coach Dwane Casey said. “Our whole thing is rebounding. I mean, we’ve got — I don't want to say spoiled, but we were with having Andre.

“(They say) ‘Andre's got it,’ and instead of going in there and getting dirty and hitting somebody, we have the length and size to do it, but we've got to get dirty with it.”