This week's News & Views looks at how the Pistons' rebuild is moving forward and why certain deals resulted in buyouts instead.

Denver — A Pistons' rebuild was inevitable. The only question was when it would happen.

Some said it should have happened years ago, before the Pistons did a few extra laps on the treadmill of mediocrity. Pistons team owner Tom Gores saw hope at the end of the trail — but that hope ended up an unattainable goal, a mirage in a barrage of injuries. 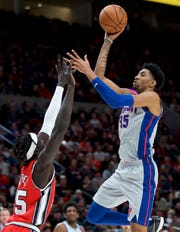 Pistons forward Christian Wood, who scored 26 in Sunday's loss at Portland, would become a hot commodity in the offseason. (Photo: Craig Mitchelldyer, AP)

The Pistons are off that treadmill now, walking instead toward an uncertain future in their rebuild, hoping to catch a ray of sunshine in the draft lottery. At 19-40, they’re destined for a top-10 draft pick this year — and maybe for the next couple of years.

There is no one clear prototype for a rebuild.

That’s where Pistons fans will need to be patient with this team and front office. It’s not much different than a large-scale home renovation. The Pistons have gutted most of the large salaries on expiring contracts, including trading Andre Drummond to the Cavaliers and reaching buyout agreements with Reggie Jackson and Markieff Morris. Luke Kennard was mentioned in trade discussions; seemingly, every player was available before the deadline.

The inability to trade Blake Griffin is the only thing stopping the rebuild from being a full-scale roster makeover — down to the studs — reconstructing from the ground up. Griffin, who had knee surgery and likely will miss the rest of the season, is set to do full workouts this summer and be ready to come back next season.

The hope is that he’ll come back fully healthy — and if it’s anywhere near his All-NBA production from last season, it could shorten the rebuild time. Griffin has two years left on his contract, including a player option worth $39 million in 2021-22.

In the interim, the front office, led by Ed Stefanski, is filling the roster with young talent and trying to separate the wheat from the chaff.

How long that takes is the lingering question.

News & Views takes a look at the Pistons’ rebuild and what’s coming.

►News: The Pistons’ only trade was Drummond, but they later bought out Jackson and Morris.

►Views: It’s one of the big questions in the aftermath of the trade deadline. They didn’t deal Langston Galloway, Morris, Jackson or even Derrick Rose. In reading the tea leaves, there didn’t seem to be a big trade market for any of those players. Even Drummond, who intimated that he would opt out of his contract this summer, only garnered a 2023 second-round pick.

The fact that the Pistons bought out Jackson and Morris and the pair quickly joined the Clippers and Lakers, respectively, showed that teams knew they just had to wait out the deadline to avoid giving up an asset. There were other teams sniffing around for other players, but sending the Pistons a draft pick wasn’t in the cards.

Stefanski said in a conference call that just like in last season’s trade with the Lakers that brought Svi Mykhailiuk and another second-round pick was the preferred rebuilding tactic. The Pistons coveted Mykhailiuk rather than just another “nameless” selection because the Pistons had scouted Mykhailiuk and wanted him.

►News: The Pistons are 19-40, the sixth-worst record in the league.

►Views: For many observers, the assumption is that they’re tanking, but with most of their projected rotation either injured or with other teams, they weren’t going to be trending toward the playoffs in the last two months of the season.

With 24 games left, the Pistons have the sixth-worst record and are 1½ games behind the Atlanta Hawks to be in position for one of the three worst records, which brings the best odds: 52 percent for a top-four pick and 14 percent for the No. 1 overall selection.

That could bring an impact player such as Anthony Edwards, LaMelo Ball, Killian Hayes or Tyrese Halliburton in the draft, which will be a nice building block.

►News: Christian Wood is surging, with 20.7 points, 10.1 rebounds and shooting 39 percent on 3-pointers in his last seven games.

►Views: Wood isn’t a secret anymore. Teams will come knocking this summer, when Wood becomes an unrestricted free agent. The Pistons have his Early Bird rights and can pay more than other teams, but that number could top out in the range of $10 million per season.

In his most extensive playing time of his career, Wood is putting everything together and showing the full extent of his game. One would presume that the Pistons would bring him back, given that they don’t have another center under contract.

Coach Dwane Casey lauded Wood’s effort and motivation, with 26 points and nine rebounds in Sunday’s loss at Portland. Some fans have groused about why Wood isn’t starting, but it seems they’ve seen enough of Wood to know what they’ll do with him. Thon Maker and Sekou Doumbouya need that playing time more, in order to gauge where they’ll be moving forward.

Outlook: The Pistons (19-40) have lost six straight and have struggled to put together a productive starting lineup. The Nuggets (39-18) have won seven of their last 10 games and have the second-best record in the Western Conference.