The Pistons are taking steps to ensure the health of their players, staff and team employees.

With a player testing positive for coronavirus, the NBA suspended the season indefinitely on Wednesday. The Detroit News

Detroit — Wednesday’s announcement that the NBA suspended its season indefinitely sent shock waves through the sports landscape. After the initial impact felt around the league, the Pistons turned their focus to their organization and employees, with an eye on the path forward for everyone, not just players.

With the news of preliminary positive coronavirus tests from two players from the Utah Jazz — whom the Pistons hosted at Little Caesars Arena on Saturday — the Pistons are taking steps to ensure the health of their players, staff and team employees. 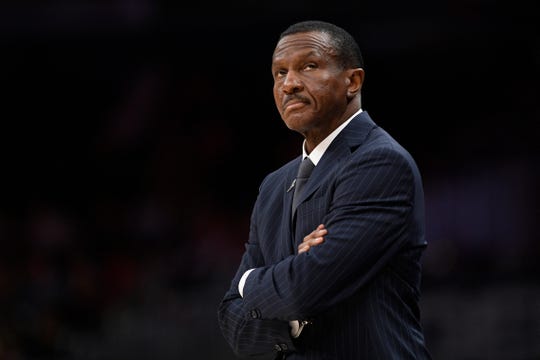 “While there is no indication that the novel coronavirus was passed to any Pistons player or staff member, out of an abundance of caution medical staff has asked players, coaches, basketball staff and traveling party to self-isolate until further notice under the direction of team medical staff,” the Pistons announced Thursday.

“As a further precaution, the organization has directed all employees to work from home for the rest of this week while we consult with medical advisers regarding potential risk and mitigation.”

A league source informed The Detroit News that Pistons players and staff were able to get coronavirus tests as early as Thursday, but if they were not presenting with symptoms, the tests were optional.

It’s unclear how many members of the team, including coaching staff, medical and training staff and front office personnel were tested Thursday or how many will be tested in the coming days.

According to medical experts, the timeline for quarantines is two weeks, the incubation period for coronavirus, and it’s unclear when or if the NBA season will continue. The Pistons are proceeding with caution to ensure that they remain healthy.

“The health and safety of our employees, players, partners and fans is our top priority,” the team statement said. “We are in close contact with our organization’s health care providers and medical experts, with government and public health officials, and with the NBA to ensure that the potential risk is well understood and all appropriate protective measures are taken.”

In an effort to monitor the health of the players, the NBA reportedly has enacted new policies to help mitigate the risk of more individuals contracting coronavirus. This includes keeping players close to home and remaining in self-isolation, no group workouts or practices and keeping in contact with team doctors or trainers.

After a two-game road trip and a stoppage in the schedule, the Pistons are looking to get back to a sense of normalcy.

“As players, we're being cautious and we're listening to the direction of what the league wants to do going forward and we just continue to just stay on protocol, not really trying to do too much right now with the fans, and trying to monitor everybody on our team,” guard Langston Galloway said Wednesday.

“It's not just affecting us; it's affecting a lot of people around the world, so we're just trying to be cautious and just taking it one step at a time and listening to what the league has to say.”

The NBA has informed all 30 teams on policies effective immediately and through March 16, including:

- All players must remain in market of team
- Players remain home as long as possible
- NO group workouts, practices
- Team physicians/trainers speak to each player once a day

Checks are in the mail

Another concern in the midst of the suspension of NBA games is the compensation for game-day employees such as concession sales staff and ushers.

The Pistons are looking to make accommodations to ensure that those workers will be paid, even though there will be no games. Many of those people work directly for the Pistons, but some others, such as food-service workers, are employed by other companies, such as Aramark, which contract with the teams.

It’s uncertain how those workers will be impacted, but the Pistons are looking to provide assistance for them as well.

“All Pistons employees, including hourly and part-time staff who support game day activities at Little Caesars Arena, will be paid during the stoppage,” said Mark Barnhill, a partner at Platinum Equity, the company founded by Tom Gores that owns the Pistons. “While we cannot speak directly for other companies that employ staff in the arena, we are hopeful of reaching accommodation protecting them as well.”

The Pistons share Little Caesars Arena with the Red Wings, whose games also are suspended by the NHL.