This week’s Pistons Mail Satchel focuses on the uncertainty moving forward and what the Pistons could do in the offseason and the draft.

Detroit — It’s anything but business as usual.

The COVID-19/coronavirus pandemic has changed the way we live and has put sports — rightfully — in a secondary role in our culture. 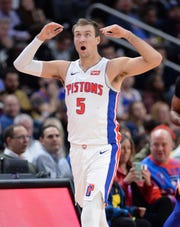 Luke Kennard's future with the Pistons could be a looming question this offseason. (Photo: Clarence Tabb Jr., Detroit News)

It’s hard to talk about sports in the midst of everything else going on, but as many folks have noted on social media, they need some escape from the political bickering, updates on the number of confirmed cases and death toll, and the falling stock market.

Sports have been the escape during normal times and even in dire times, it remains a needed distraction to revert away from the more serious matters of the world.

Though the NBA is on hiatus, there are still some things that remain unresolved, pending the course of the virus and how close everything is to a new normal.

This week’s Pistons Mail Satchel focuses on the uncertainty moving forward and what the Pistons could do in the offseason and the draft:

► Question. In your opinion, what is the Pistons issue to address in the off-season? #1 issue. — @CallMeDjm

► Answer. The top issue is sorting through their roster and figuring out the direction for next season and beyond. Where do the young players such as Sekou Doumbouya, Bruce Brown, Svi Mykhailiuk and Christian Wood fit in the grand plan? Will they keep Derrick Rose or Luke Kennard, or trade them for younger assets?

There are plenty of unanswered questions about individual players on the roster and figuring out who stays and who goes will be significant to determine the long-term direction. Will they use some of their freed-up money in free agency this summer or wait until 2021?

Next season, there isn’t a likely path to them contending, and if they’re going to keep a toe in the contending pool, they’ll have to be very shrewd about the moves they make, without spoiling their long-term outlook.

► Q. If the Pistons draft a guard, obviously it depends on the player, but how many minutes do you seem that rookie playing? — @allpistons

► A. At this point, there are plenty of minutes to go around, given that the Pistons only have Derrick Rose under contract. They have some other potential options in Kennard and Brown, but those have brought mixed results this season. There has been a glut of options at guard this season, but none has stood out as the long-term solution.

The answer could depend on whether that guard turns out to be Anthony Edwards, or if it’s LaMelo Ball, Killian Hayes, Cole Anthony or Tyrese Haliburton. Actually, maybe it doesn’t. Going into the season in full rebuild mode might open the floodgates to optimal playing time for whoever is the pick.

► Q. How are Pistons players staying in shape? The rest has to be good for D.Rose and Luke. Can injured players like Blake use the full facilities and medical staff still for rehab? — @rudyjuly2

► A. For the most part, they’re limited to finding private gyms or working out at home. The NBA has prohibited players from using the team’s practice facility or public gym facilities such as Lifetime Fitness. That doesn’t leave many options, and until last week, they weren’t allowed to leave the city where the team is. That restriction has been relaxed, but there just aren’t very many options to go and find places to play.

In theory, it’s good for Rose and Kennard, but to what end? The Pistons have the fifth-worst record in the league — and they’re within half-game of getting one of the coveted top-three spots, which would have more favorable odds of getting the No. 1 overall pick.

Even in their last 16 games, what’s there to learn? They know everything they need to know about almost everyone on the roster, except for maybe Jordan McRae, Donta Hall and Doumbouya. 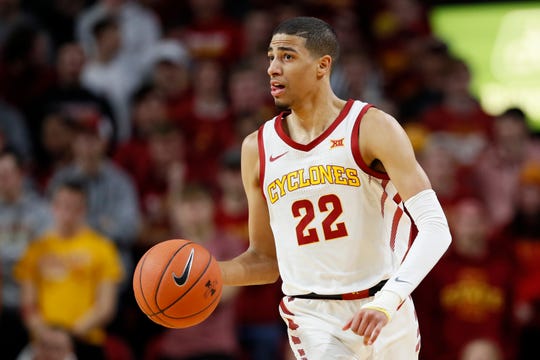 Iowa State guard Tyrese Haliburton could be an option for the Pistons in the NBA draft. (Photo: Charlie Neibergall, Associated Press)

► Q. Are we going to take Tyrese Haliburton with our pick yes or no cuz that's who I want — kornkat2020

► A. There’s still so much up in the air that it’s hard to attach them to a name. Again, they don’t even know which pick they’ll have in the lottery, so it’s a bit premature to start slotting them for names. I would think as a point guard, his name is on some list of their top prospects, but I wouldn’t go much further than that.

► Q. Has anyone had any conversation with Blake lately? Should there be ANY optimism that he could actually return healthy next season and contribute or should fans accept the harsh reality that the 2018-19 Blake just won’t come close to happening again — @D_Schandy24

► A. Griffin talked to the media on March 6 and said his rehabilitation was going well, and that he’d be ready to return to summer workouts and for the start of next season. Whether that means he’ll get back to last season’s form is another question — maybe not realistic, given how good he was playing.

I don’t think many people have that expectation, but even being somewhat functional and staying healthy for the first chunk of the season would be a start.