Christian Wood almost recovered, all other Pistons tested are negative for COVID-19

The Pistons cleared the first wave of COVID-19 testing on Wednesday, with only one positive test.

Christian Wood almost recovered, all other Pistons tested are negative for COVID-19

Detroit — The Pistons cleared the first wave of COVID-19 testing on Wednesday, with only one positive test.

Christian Wood, one of the first NBA players to test positive for coronavirus, is almost fully recovered. In order to be cleared, a person needs two negative tests, spaced at least 24 hours apart. Wood passed the initial test Wednesday and will take the second test on Thursday, a league source told The Detroit News. 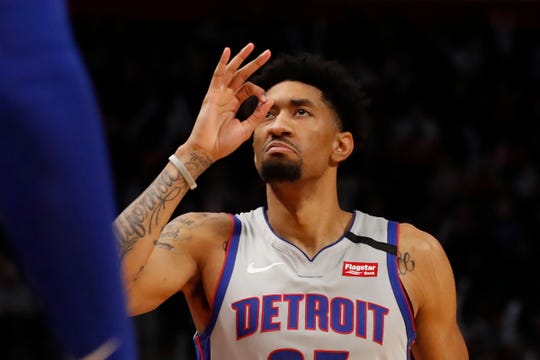 Christian Wood is one test away from being declared coronavirus-free. (Photo: Carlos Osorio, AP)

The Pistons also tested 16 other members of their traveling party of more than 50 people, which included players, coaches, front office members and support staff. That group traveled to road games against the New York Knicks and Philadelphia 76ers on March 8 and 11, respectively.

The NBA suspended the remainder of the season after Utah Jazz center Rudy Gobert test positive on March 11. Jazz teammate Donovan Mitchell also tested positive the following day. The Pistons had hosted the Jazz at Little Caesars Arena on March 7.

More: Wojo: When sports return, will the obsession return too?

The 17 Pistons tests were done through a private lab and were not taken from the allotment of public testing kits. In the Pistons’ cases, tests were only given if the person had direct contact with a person who had tested positive and presented with symptoms or had an underlying condition that made them more susceptible.

Since then, the traveling party and anyone who had direct contact with anyone who tested positive had been on self-isolation for a two-week period, which ended Wednesday.

In the weeks since the initial positive tests, a total of 10 NBA players have tested positive, including four players from the Brooklyn Nets, including Kevin Durant. Boston Celtics guard Marcus Smart, as well as two Lakers players.

NBA commissioner Adam Silver has indicated that the league plans to continue the schedule when the virus issues have subsided, with an initial 30-day hiatus. It’s unclear whether the timetable could be pushed back or the season could be canceled depending on how severe things become.

When the season was suspended, the Pistons were 20-46, the fifth-worst record in the league, having lost 12 of their last 13 games.