In the midst of the COVID-19 pandemic, workers from the Pistons organization made a trek Thursday to Cleveland to get needed medical supplies to help in the fight against the virus. The haul was critical: 15,000 ICU surgical gowns that would benefit the Henry Ford Health System, the Pistons’ medical

Detroit — The trip was just a couple of hours, but the impact measured much more than that, especially during a medical crisis.

In the midst of the COVID-19 pandemic, workers from the Pistons organization made a trek Thursday to Cleveland to get needed medical supplies to help in the fight against the virus. The haul was critical: 15,000 ICU surgical gowns that would benefit the Henry Ford Health System, the Pistons’ medical partners. 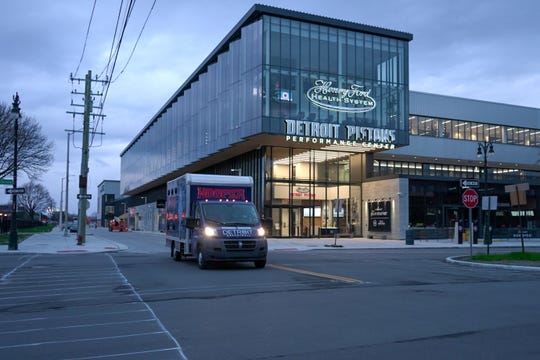 In the midst of the COVID-19 pandemic, workers from the Pistons organization made a trek Thursday to Cleveland to get needed medical supplies to help in the fight against the virus. (Photo: Courtesy of the Detroit Pistons)

“During this time, we’ve been trying to play our part in helping the city and state, and health officials and philanthropic groups as partners to fight the virus and its impact,” Pistons vice chairman Arn Tellem said. “I’ve had regular discussions with the mayor’s office and governor’s office and with Henry Ford Health Systems, which is our partner.”

Obtaining the personal protective equipment is the latest effort the Pistons organization has made during the pandemic. They’ve also offered their practice facility as a potential field hospital in case of a large outbreak, partnered with state and local organizations to donate $375,000 to the Forgotten Harvest food bank and created public-service announcements featuring coach Dwane Casey and radio announcer Rick Mahorn.

“We want to be an organization that is an example of being actively involved in our community and supporting those in need and the frontline workers who have put their lives at risk to help others,” Tellem said.

Pistons forward Christian Wood was one of the first NBA players to test positive for the novel coronavirus but was the first to announce that he had fully recovered. Pistons scout Maury Hanks was in serious condition after testing positive for COVID-19 but is recovering as well.

Tellem said that about three or four other individuals in the franchise’s business operations side have tested positive, but “everyone is OK.” Only those who presented with symptoms were tested, which is similar to the nation as a whole, with limited testing capability.

The NBA season has been suspended since March 11, after Jazz center Rudy Gobert tested positive. With most of the country on stay-at-home orders from state governors, there’s no clear timeline for resuming games. Most teams have about 16 games remaining in the regular season and there are any number of options to a path forward.

“The issue right now is they don’t know; they’re looking literally at every option. Their hope is to continue play. It’s going to be determined by the doctors and medical experts,” Tellem said. “I don’t think we’ll get a sense until after this month and we get a drop in the cases.”

The Pistons are looking for more ways to impact Detroit, where coronavirus is affecting the black community at an alarming rate. It’s a concern that Tellem is keenly aware of.

“In Detroit, for an NBA team, our players and the African-American community — which has been hit incredibly hard and has been disproportionate in the amount of cases and amount of deaths — we want to do our part to help the community too,” he said.

Although the Pistons’ Player Performance Center has been offered as a potential overflow hospital, Tellem said he’s not sure that it will be used by the Army Corps of Engineers. The city’s largest convention center, TCF Center, a much bigger facility, already could fill the need.