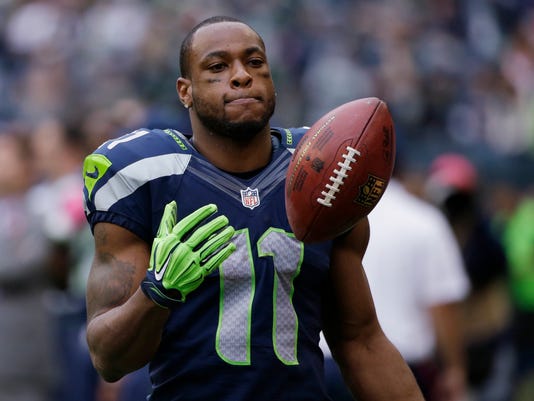 Two people familiar with the trade told the Associated Press on Friday, that Percy Harvin, a star in last season's Super Bowl but injury-prone through his career, was headed to the Jets. The people spoke anonymously because the deal was not officially announced by either club. (Photo: Elaine Thompson , Associated Press )

Two people familiar with the trade told the Associated Press on Friday that Harvin, a star in last season's Super Bowl but injury prone through his career, was headed to the Jets. The people spoke anonymously because the deal wasn't officially announced by either club.

The 26-year-old Harvin has played in only 43 career games since being a first-round pick (22nd overall) by Minnesota in 2009. He was traded to the Seahawks in 2013, appearing in just one regular-season game because of hip surgery. But he had two rushes for 45 yards and ran back the second-half kickoff 87 yards for a touchdown in Seattle's 43-8 win over Denver in the Super Bowl.

The deal was first reported by Fox Sports.

Harvin has battled a thigh injury and was listed as questionable for the Seahawks' game at St. Louis this weekend. The Seahawks have tried to find a variety of ways to use him in their offense as a runner, receiver and on special teams, but injury woes slowed their plans.

This season, Harvin has 22 receptions for 133 yards, with 12 of those catches coming behind the line of scrimmage. He has only one catch on a ball thrown more than 10 yards, according to STATS. Harvin's average of 6 yards per catch is last among all wide receivers in the NFL averaging at least two receptions per game.

New York's offense has struggled and the Jets have lost six straight since opening with a win over Oakland. Harvin figures to team with Eric Decker and Jeremy Kerley as the Jets' main weapons in a so-far weak passing game with Geno Smith at quarterback.

... Dolphins quarterback Ryan Tannehill is probable for Sunday's game at Chicago because of an ankle injury.

... Titans quarterback Jake Locker is questionable for Sunday's game with the Washington because of his bruised right thumb.

... The Jaguars will be without running back Toby Gerhart for a second straight week because of an ankle injury.

... Bills wide receiver Marquise Goodwin has been ruled out for Sunday's game against the Vikings with a hamstring injury.

... Packers cornerback Sam Shields has been ruled out of Sunday's game against Carolina with a knee injury.

... Bears linebacker Lance Briggs (rib) was ruled out for Sunday's home game against the Dolphins.

... The $25,000 fine assessed to Cincinnati linebacker VontazeBurfict was confirmed by the NFL.

Burfict was fined for twisting an opponent's leg twice after the play was over against Carolina.

... Chicago safety Ryan Mundy was fined $22,050 for striking a defenseless player in the head and neck area in a 27-13 win at Atlanta. He hit Falcons receiver Roddy White.

... Fined $8,268 were Broncos linebacker Lamin Barrow for throwing a punch against the Jets, and Giants center Weston Richburg for striking the Eagles' Fletcher Cox late.