Branch expects UM to save his bets

Ex-UM defensive tackle Alan Branch is among those excited about Jim Harbaugh taking over.

Branch expects UM to save his bets 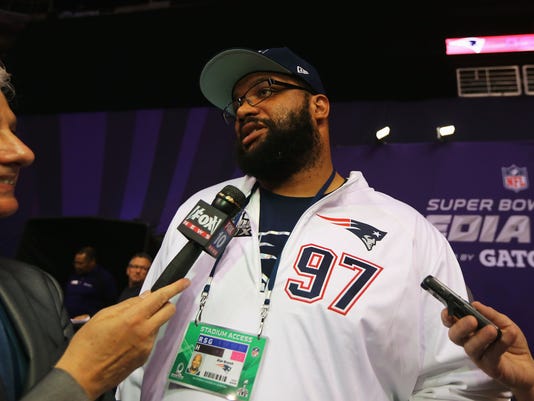 Alan Branch of the Patriots talks to the media this week ahead of Sunday’s Super Bowl.(Photo: Elsa / Getty Images)

Chandler, Ariz. — Former Michigan defensive tackle Alan Branch listed a few reasons he's excited about Jim Harbaugh taking over as head coach for Wolverines. Perhaps the best reason, though, is Branch will have a better chance to win some of his friendly wagers when he bets on his alma mater.

Like many NFL players, Branch, who's now with the New England Patriots, makes bets with his teammates when their college teams play. Most times, the bets are either $100 or result in the loser wearing the opposing team's colors. But Branch doesn't like making the jersey bets any more.

When he was with the Cardinals in 2009, he made a bet with former Ohio State running back Beanie Wells. After the Buckeyes won, Branch had to wear an Ohio State shirt for three days.

"I didn't make any Ohio State bets after that," he said. "I couldn't handle losing. I just didn't want to wear any Ohio State stuff. That's too big of a risk because he kept trying to take a picture of me and put it online, too, so I was worried."

Wells allowed Branch to draw a circle with a cross around the logo, but it still was a painful experience. He also once had to wear a shirt for Notre Dame, a team he hates more than Ohio State because he watched the Fighting Irish on NBC so much growing up.

Under Harbaugh, Branch expects Michigan's recruiting to improve because of his visibility as coach of the San Francisco 49ers the last four years. He also thinks Harbaugh will have Michigan playing an old-school, smash-mouth brand of football that's been missing since Branch left. In Branch's last season in 2006, the Wolverines went 11-2, and in the eight years since, they've won eight or more games just twice and had three losing seasons.

"It was difficult. I lost a lot of money, had to wear a lot of different team's jerseys, but I was always a fan," Branch said. "I'm always going to root for them. It's been a little tough, but you can't always be up, right?"

On Sunday, Branch has a chance to win his first Super Bowl when the Patriots play the Seattle Seahawks. He lost a Super Bowl with the Cardinals in 2008. Even though he's been on four different NFL teams in his career, he's enjoyed the ride.

"It's kind of like riding a skateboard on the boardwalk in California," he said of his career. "There's not too many highs, not too many lows, kind of smooth. But every once in a while, someone might kick a rock up on the pavement, and you might hiccup on it and have to catch your balance. But for the more part, my career's been great.

"Thank goodness there's people out there that give you second and third chances."