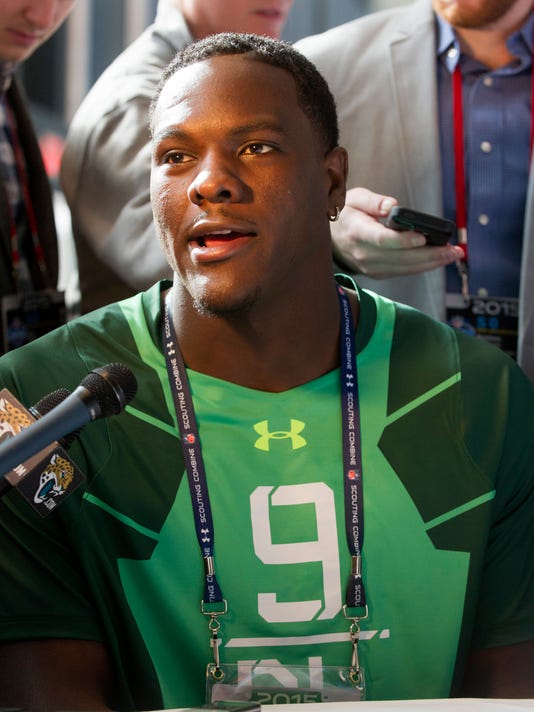 Indianapolis — Former Michigan defensive end Frank Clark didn't know how much his NFL dreams were dashed by a domestic violence charge in November that resulted in his dismissal from the Wolverines.

So when Clark received his invitation to the NFL combine he said he cried, overcome with joy while being completely surprised.

"I'm so passionate about this game, and when it was taken away from me it hurt me like I lost my best friend," he said Friday. "This game is all I've known for my whole life."

Police in Sandusky, Ohio arrested Clark in November with two misdemeanors for allegedly attacking his girlfriend in a hotel room at the Maui Sands Resort & Indoor Waterpark. Clark had a pretrial hearing scheduled Friday, but said his attorney told him he didn't need to attend. Clark was also hopeful the charges would be either reduced or dismissed.

In the NFL, though, anything related to domestic violence is being increasingly frowned upon following the incident with Ray Rice punching his now-wife in an elevator last year. Clark understands the charges could hurt his draft stock, but said some teams are talking to him strictly about football.

Since being dismissed from Michigan, Clark said he's been in counseling and has leaned on his high school coach — Ted Ginn Sr. at Glenville High in Cleveland — for advice.

"Counseling has taught me how to be a man. It's not like I'm a man when I'm 21," Clark said. "It's taught me to be a man and how to accept responsibility for all my actions. When you go through things in life — whether good or bad — you've always got to learn from it. Counseling has taught me how to grow up and how to learn from everything I go through. No matter if I say it's my fault or not, how to accept responsibility."

And that last part was something Clark reiterated in discussing the incident with his girlfriend.

"When we were in the room, the person involved let something get out of hand and took something further than what it was planned," he said. "You look at a phone and nowadays these phones get a lot of people in trouble. I'm not saying I'm a womanizer or anything of that nature. I'm just saying it was a confrontation between me and one of my friends and the woman involved took it to another level that it shouldn't have been taken to.

"That's fine. I'm not throwing her under the bus. I'm not saying she did anything wrong. I'm just saying that a lot of things that happened in that room that night could have been avoided."

But because they weren't avoided, Clark must now convince teams that a similar situation won't occur again. NFL.com draft analyst said Clark likely would've been a mid- to late-round pick, but thinks the domestic violence incident will cause him to go undrafted.

Whether or not he's drafted, Clark's invitation to the combine is a good sign he'll have a shot in the NFL, and he hopes to take advantage when he does.

"I don't want to be average in this league," he said. "If I get that shot, I want to be someone who's talked about for years to come, not just the next couple months."