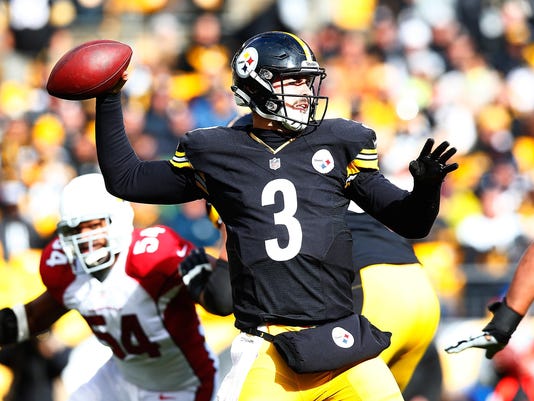 Landry Jones had been the Steelers’ third-string quarterback since being drafted in the fourth round out of Oklahoma in 2013.(Photo: Jared Wickerham / Getty Images)

Now, it looks as if he will make his first start this week.

Steelers coach Mike Tomlin said Tuesday his team will prepare for Sunday’s road game against the Chiefs as if Jones will be the starting quarterback.

Starting quarterback Ben Roethlisberger has been out since spraining the medical collateral ligament in his left knee during a Sept. 27 road victory over the Rams.

“I think it’s prudent and appropriate right now to operate under the assumption that Landry is our quarterback this week,” Tomlin said. “He is the guy that’s healthy.”

Jones had been the third-string quarterback since being drafted in the fourth round out of Oklahoma in 2013.

He played well against the Cardinals, finishing 8-for-12 for 168 yards and two touchdowns.

“We were not shocked by his performance, but we were pleased by it,” Tomlin said.

Tomlin also said Steelers center Maurkice Pouncey has not had a second surgery on his broken left fibula. There were multiple reports last week Pouncey had developed a complication from the initial surgery and would require another operation.

Giants tight end Daniel Fells was released from a New Jersey hospital after being treated for nearly three weeks for MRSA.