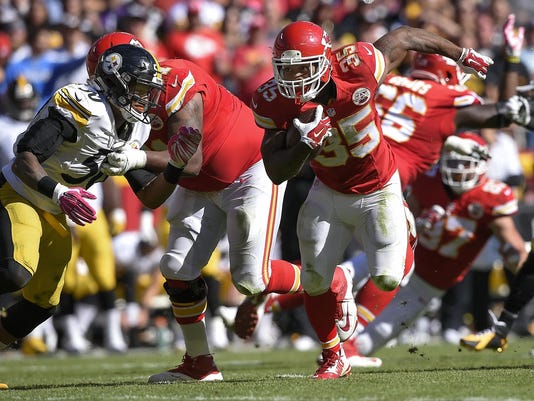 Kansas City, Mo. — The Kansas City Chiefs had been in the same position twice before this season, trying to hold onto a dwindling fourth-quarter lead inside Arrowhead Stadium.

This time, they managed to do it.

Alex Smith calmly led the Chiefs downfield in the closing minutes, hitting Chris Conley with a short touchdown toss, and Kansas City held off the ailing Pittsburgh Steelers 23-13 on Sunday to stop a five-game skid with its first home victory this season.

“Not much different than the other two games, to be honest,” Smith said of the losses to Denver and Chicago.

“A little bit, I think we just made plays down the stretch. That was the bottom line. Staying aggressive in all three facets of the game.”

Smith threw for 251 yards, while Charcandrick West added 110 yards rushing and his first career TD as the Chiefs (2-5) finally earned a celebration in their home locker room.

“This is something we’ve been working toward,” said Eric Berry, whose first interception since he was diagnosed with cancer in December led to the Chiefs’ first touchdown.

Meanwhile, the Chiefs shut down Pittsburgh’s Landry Jones, who made his first NFL start in place of the injured Ben Roethlisberger and Mike Vick. Jones threw for 209 yards and a touchdown, but he was also picked off twice and lost a fumble that helped end the game.

“If I took care of the ball today,” he said, “we would be right there in it.”

LeVeon Bell ran for 121 yards for the Steelers (4-3), who had won three straight against Kansas City. Antonio Brown had six catches for 124 yards, while Martavis Bryant caught his 11th touchdown pass in 12 career games.

“They made more dynamic plays than we did, particularly over the last 30 minutes of the game,” Steelers coach Mike Tomlin said. “They converted necessary third downs on offense and made dynamic, game-changing plays on defense.”

Tomlin said that Roethlisberger, still out with a knee injury, was close to being ready to play, and that the quarterback should be ready to go next week against Cincinnati.

“We decided to go with the guy that had the practice reps. That was the appropriate thing to do. No second-guessing,” Tomlin said. “We’ll move forward with Ben as we prepare this week.”

The first half amounted to a field-goal fest, which wasn’t all that surprising considering the amount of offensive talent that both teams were missing to injury.

Santos hit three of them after Chiefs drives stalled in the red zone, though he did miss a 54-yarder just before the half. Chris Boswell knocked through a 24-yarder for Pittsburgh.

The Chiefs finally established a cushion midway through the third quarter.

It began when Jones threw a pass over the middle that skipped away from Brown and right to Berry, who reacted quickly enough to make the diving interception.

The Chiefs capitalized by driving 47 yards, at one point using a hurry-up offense to keep Pittsburgh off-balance. West finally plunged in from a yard on third-and-goal to end a streak of seven trips to the red zone without a touchdown, and giving Kansas City a 16-3 lead.

Pittsburgh quickly answered behind Jones, whose 41-yard completion to Brown helped set up its lone touchdown. Jones lofted a pass that Bryant hauled in while tip-toing in the corner of the end zone — replays confirmed he made the reception after initially bobbling it.

The Chiefs were forced to punt, the Steelers added a field goal, and suddenly it looked as if another fourth-quarter lead would evaporate at Arrowhead Stadium.

This time, the struggling Kansas City offense — missing wide receiver Jeremy Maclin to injury and with a revamped offensive line — made every play that mattered.

Smith hit tight end Travis Kelce for a 26-yard reception to convert a third down, and West ripped off a 36-yard run moments later. He added a short run on an option play to convert another third down, and Smith hit Conley from 5 yards with 5:13 left to put the game away.

“We didn’t let off the accelerator for four quarters,” Chiefs coach Andy Reid said. “I thought that was important.”

Did you know? Matthew Stafford threw four touchdown passes the only time he faced the Chiefs.