The Broncos are 3-1 in Brock Osweiler’s starts and 7-2 when Peyton Manning starts. 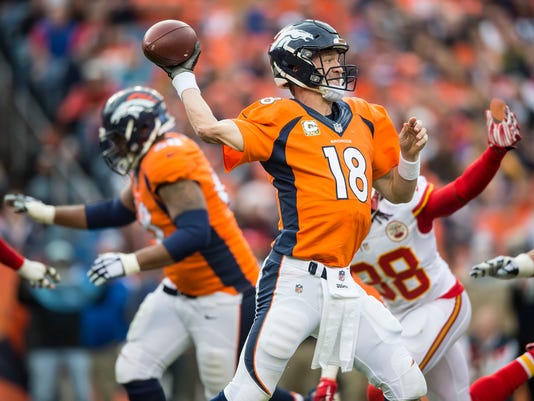 Englewood, Colo. — Peyton Manning is set to return to practice Wednesday for the first time in a month, but he’ll be a sideline spectator again Sunday when Brock Osweiler makes his fifth consecutive start Sunday at Pittsburgh.

The Denver Broncos said coach Gary Kubiak met with his QBs on Tuesday and laid out his plan for the week.

Manning had a trio of throwing sessions indoors and away from his teammates last week after he had his hard cast and then a walking boot removed from his left foot the previous week.

Manning stood on the sideline Sunday after skipping Denver’s trips to Chicago and San Diego and watching the Broncos win over New England from inside the locker room area. He has been dealing with a torn plantar fascia along with sore ribs and an aching throwing shoulder.

The Broncos are 3-1 in Osweiler’s starts and 7-2 when Manning starts, although Denver has struggled to find the end zone no matter who’s taking the snaps.

The Broncos have gone seven quarters without an offensive touchdown. They settled for four field goals Sunday when they wasted an historical effort by the league’s top defense — holding the Raiders to minus-12 yards in the first half — in losing 15-12.

Denver’s eight-game winning streak over the Raiders ended despite allowing just 126 yards of offense, including 27 yards on 24 rushes.

Osweiler completed a career-best 35 of 51 passes for 308 yards, his first 300-yard game, but he was sacked five times by Khalil Mack and several receivers dropped on-target passes.

In roughly 17 quarters, Osweiler has been sacked 17 times, including once for a safety Sunday.

Manning threw a league-high 17 interceptions in his nine starts, including four against Kansas City on Nov. 15, when he had a career-worst 0.0 passer rating on the same day he broke Brett Favre’s NFL record for career passing yards.

Kubiak pulled him in the third quarter that day and then made the switch to Osweiler the following week. Manning went to see noted orthopedist Dr. Robert Anderson is Charlotte, North Carolina.

Anderson put Manning in a cast for a week and then a walking boot for several more days while putting his rehab on hold.

Two weeks ago Manning said Anderson had no answers for him when he asked how long he’d be sidelined or when he might be able to return. But Manning has made enough progress to get back on the football field.

There’s still a possibility he could return to the starting lineup either against Cincinnati on Dec. 28 or San Diego on Jan. 3. Both of those are home games.

The Broncos ran for an average of 161 yards in Osweiler’s first three starts, nearly twice the production they got on the ground when Manning was in the lineup. At 25, Osweiler is much more athletic and mobile than Manning, who’s nearing his 40th birthday.

The Broncos were able to open up Kubiak’s entire playbook with Osweiler under center, including play-action passes, bootlegs, sprint-outs and rollouts, and heavier use of the tight ends as targets. Kubiak had to modify his run-oriented offense with Manning playing either in the shotgun or the pistol.

But the Broncos ran for just 34 yards on 21 carries last week against Oakland with C.J. Anderson sidelined by an ankle injury and Ronnie Hillman playing on a sore foot. He was bothered by the injury during the week and then got stepped on in warmups. He ran for just 20 yards on 12 carries.

On Monday, Kubiak hinted at his plans for his QBs, but said he wasn’t prepared to say if Manning could return to practice or whether Osweiler would start against the Steelers (8-5).

“I have to see where he’s at,” Kubiak said of Manning. “We have to talk through his situation and see where we are. I’ll talk to (head athletic trainer Steve Antonopulos). We went through a good week last week, gave him the weekend off, so we’ll see where we’re at. We’ll have a plan in place by the time we get to Wednesday.”

While Denver’s offense has struggled behind both quarterbacks, tight end Virgil Green said the Broncos (10-3) believe they can win with either one.

“Both 17 and 18 are great quarterbacks. Teams have to prepare for both of them differently. I have a lot of faith in both of those guys,” Green said. “Brock is definitely a competitor and Peyton, I’ve seen him pick defenses apart like it’s nothing.”

Rawls, who has been starting in place of the injured Marshawn Lynch, broke his ankle and suffered ligament damage during a 35-6 victory over the Ravens last weekend.

Rawls finishes the season with 830 yards rushing. He had four games of more than 100 yards, including a Seahawks rookie-record 209-yard performance against the 49ers.

... Bears rookie receiver Kevin White (stress fracture in left shin), the No. 7 pick in the draft, will remain on the physically unable to perform list for the rest of the season.

... The Ravens signed free agent quarterback Ryan Mallett, who played in six games with the Texans this season and spent one year at Michigan.

With Hartline out, Terrelle Pryor could get more playing time this week in Seattle