Double sessions and two-a-days have evolved into shorter sessions and a walkthrough after the labor deal in 2011.

Hey, hold on. You can’t do that. Not anymore.

When 10 years’ worth of labor peace came to the NFL in 2011, so did a massive change in the rules governing practice — during the season, the offseason and, most especially, in training camps. Lengthy double sessions, the dreaded by players two-a-days, became a shorter session and a walkthrough.

Hitting anywhere outside the games themselves was minimized. Days off during camp were required. Perhaps as worrisome to coaching staffs, not to mention players on the roster bubble, was a significant decrease in teaching time.

Unless the collective bargaining agreement is opened before it expires after the 2020 season, none of that will change. And the complaints will remain.

“Some of the things, that you can’t put a player in front of a player in the offseason even with a pad on,” Cowboys linebackers coach Matt Eberflus said of one major problem. “That to me is restrictive because you have to use managers and those types of things. The rules are the rules and we abide by the rules. But I think that at times can be a little bit restrictive.”

So does Falcons guard Ben Garland, to a degree. 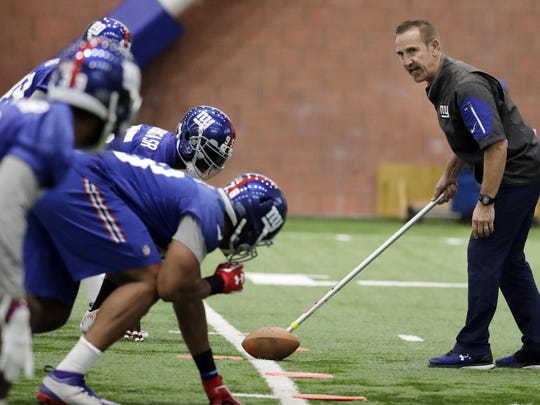 New York Giants defensive coordinator Steve Spagnuolo, right, runs a drill with his players during the team's organized team activities at its training facility in East Rutherford, N.J. When 10 years’ worth of labor peace came to the NFL in 2011, so did a massive change in the rules governing practice, during the season, the offseason and, most especially, in training camps. (Photo: Julio Cortez / Associated Press)

“I think it depends on who you are,” the veteran of three NFL seasons said. “If you are a guy who is really young and a free agent and doesn’t have a lot of reps, it is really tough for you because it really limits your reps and your experience.

“If you’re an older guy, a vet like Alex Mack and Andy Levitre who have played a lot of years and you can just come out here and get these nice, crisp, hard and fast reps, I think it’s very beneficial.

“That’d be tough as a rookie free agent to come in here and only get a few snaps to show yourself.”

Where coaches would run and rerun plays that didn’t look right in the pre-2011 training camps, they now must turn to film study, videos, photos and other teaching methods in many cases. Some of the great strategists of the game, from Pete Carroll in Seattle to John Harbaugh in Baltimore, have become educators at OTAs, minicamps and during the summer.

Having veterans who have been on the same team for a while is a major boost to the coaches. Those players can help the youngsters learn more quickly, from the basics to the nuances.

Of course, with free agency and monster contracts such an overriding factor in today’s NFL, that stability is exceedingly difficult to maintain. Plus, assistant coaches tend to move around.

“It is huge,” Giants defensive coordinator Steve Spagnuolo explains about the importance of continuity. “I mean look, there have been times where I have had this position and the staff has changed one or two spots, and you do spend some time teaching the coaches exactly what you want if they haven’t been in your system. We try to do a very good job of it, the communication to me to the coaches, to the players, has to be exact or else it doesn’t come out right.

“I mean every once in a while I say to the guys, ‘Look, we are in graduate school now. We are there, so we are going to put in something a little bit more complex.’ And that was the graduate thing last year. We built on it and I think it helped the guys to do it that way rather than to throw it all on them.”

Is everyone in graduate school?

“Well,” Spags adds, “we are only in graduate school in certain things. You have the freshmen and the sophomores (too).”

Lots of those. After all, clubs are allowed 90 players in training camp. It makes for some very crowded situations at most positions. Playing your way onto a roster is more difficult than ever.

Unproven players, particularly the undrafted and the castoffs from other teams, must excel everywhere and all the time.

“I think we do a good job here of taking advantage of our individual work, taking advantage of what we do at practice, making sure we’re not out there just jogging,” said Broncos tight end Virgil Green, a seventh-round pick in 2011 who is entering his seventh pro season.

Green could be the inspiration for the overlooked, a guy who not only made the show, but stuck around — despite the limitations on proving himself.

“A lot of times as players we need some mental learning. That second walkthrough, I know it helped me my first few years … mentally and knowing my assignments. Everything’s being evaluated, but it’s a time where you can really stop and see what’s going on, see the older guys do things.

“Because when you go out there, especially as a younger player, they’re probably going to run the same plays that the older guys ran. So, it’s a time to really sit, look and listen to the coach and hear what the coach says to the older players if there’s a correction that needs to be made. So I think that’s how we make up for not doing the extra practices; you take that extra time to really gravitate to what we need to learn.”

Dolphins coach Adam Gase notes that everyone must work under the same restrictions, and the 32 teams have had a half-dozen seasons to adjust. But he also points out a disadvantage teams such as Miami, Tampa, Jacksonville, New Orleans, Houston, Dallas and Arizona must deal with: weather.

“Down here it’s different,” Gase said. “We probably have shorter practices than most teams in the league because we have to think it’s July to December, right? We’ve got to maximize the time we’re on the field, and then when we get in the meeting rooms, we have to understand you can’t waste time in there.

“We have to use the fact that we are going to have more meeting times than most people because we’re not on the field as much, and we’ve got to make those count. It can’t just be going through the motions.”

Many fans tend to think training camp and preseason games are exercises in going through the motions. That little matters until those kickoffs in September.

In reality, the summer weeks are more critical than ever.

“This offseason calendar, pretty much we have adapted to it,” Saints coach Sean Payton said. “The trick is making sure that you have enough time with the young players.

“But certainly the changes have come, and very quickly as coaches, you get up to speed with them. You can spend a lot of time discussing them, but what is more important is discussing what you are going to do with them.

“I will be honest; I find myself spending more time on preparing how to react. There is someone else who is going to decide whether or not it is long enough or physical enough. I have 10,000 other fires I am worried about.”