Carson Wentz tossed four touchdown passes to lead the Philadelphia Eagles to their fifth straight win with a 34-24 victory over Washington. 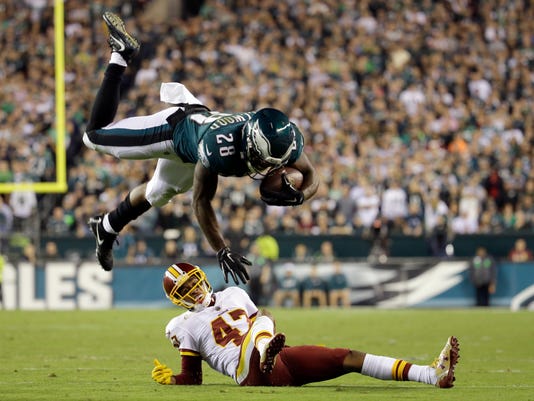 Eagles running back Wendell Smallwood (28) goes airborne while trying to avoid a tackle by Washington cornerback Quinton Dunbar during the first half on Monday night.(Photo: Michael Perez, Associated Press)

Philadelphia — Carson Wentz stood tall in a collapsing pocket and kept making plays with his arm or legs.

“You step up and go into make-a-play mode,” Wentz said after making one highlight play after another in front of a national audience while cementing his status as a first-half MVP candidate.

The second-year quarterback threw for 268 yards and ran for a career-best 63 after a shaky start to lead the NFL-best Eagles (6-1) to their fifth straight win. But the victory was costly because Peters was carted off the field with a knee injury in the third quarter.

Kirk Cousins threw for 303 and three touchdowns for Washington (3-3).

“Carson made some unbelievable plays there in crunch-time situations,” Washington coach Jay Gruden said. “We lost and it wasn’t good enough by anybody, offensively. But Kirk competed and made some great throws, some great plays.”

The Eagles went three-and-out three times in their first four drives and had only 57 total yards before Wentz hit Mack Hollins in stride with a perfect 64-yard touchdown pass to tie it at 10.

That got the offense rolling.

Wentz connected with Zach Ertz for 46 yards on the next series and found him again for a 4-yard touchdown pass to make it 17-10.

After getting the second-half kickoff, the Eagles drove 86 yards for another touchdown. Peters was injured during the series, and fans chanted his name while teammates surrounded the cart.

Wentz finished the drive off with a play that Peters would appreciate.

While being hit by two defenders and falling forward, Wentz lofted a 9-yard touchdown pass to Corey Clement.

“One of the best plays I’ve seen in a long time and by two young guys,” Eagles coach Doug Pederson said. “To hang in there and take shot after shot, it’s amazing to me.”

Wentz fired a 10-yard touchdown pass to Nelson Agholor to expand the lead to 31-17. Wentz kept that drive alive by escaping a sack and running 17 yards on third-and-8.

“That’s what makes him so special,” right tackle Lane Johnson said. “He has great field vision, and he’s got something a lot of guys don’t have.”

Cousins tossed a 7-yard touchdown to Chris Thompson to give Washington a 10-3 lead. He connected with Jordan Reed on a 5-yard touchdown to cut the deficit to 24-17 and threw a 12-yard pass to Reed to cap the scoring.

The Eagles were penalized on four straight plays to start their first possession before Wentz was intercepted by Quinton Dunbar on a deep pass to Torrey Smith on second-and-31.

Philadelphia swept Washington for the first time since 2013 and has a commanding lead in the NFC East. Dallas and Washington are tied for second place.

Thomas, a perennial Pro Bowl left tackle — and iron man, tore his left triceps Sunday against Tennessee, and an MRI taken on Monday confirmed the severity of an injury that has dealt another devastating blow to an already floundering franchise.

Thomas, 32, said he’ll probably have surgery Tuesday and he’s been told that he’ll need 6 to 9 months to make a full recovery. Thomas, who is under contract for one more year, said he’s been too focused on surgery to consider whether he’ll continue his career.

“I haven’t really thought about coming back yet,” he said on a conference call.

The face of the Browns for a decade, Thomas played 10,363 consecutive snaps before he was forced to leave the field on Sunday, ending what is believed to be the longest consecutive plays streak in NFL history.

“Heartbreaking,” rookie quarterback DeShone Kizer said after the Browns lost 12-9 in overtime. “A guy who has done everything right.”

His injury is just one of many current issues for the winless Browns, who are 0-7 this season and 1-22 in two seasons under embattled coach Hue Jackson.

“I appreciate everything that he is,” Jackson said.

Matt Moore is expected to start in Cutler’s place after coming off the bench Sunday to lead a 31-28 comeback victory against the Jets.

... Cowboys running back Ezekiel Elliott will play at least one more game before another ruling from a federal judge on his six-game suspension over domestic violence allegations.

U.S. District Judge Katherine Polk Failla turned down the NFL’s request for an expedited hearing on a preliminary injunction. She set one for Oct. 30, a day after the Cowboys visit Washington.

... Colts safety Malik Hooker will miss the rest of the season after injuring his right knee in Sunday’s 27-0 loss to Jacksonville.

Brown, who has two years remaining on his contract, had sought a new deal which he did not receive.

... Cowboys kicker Dan Bailey is expected to be out a few weeks because of groin injury that sidelined him in the second quarter of Sunday’s 40-10 victory over the 49ers.

... Chargers left guard Matt Slauson will miss the rest of the season because of a biceps injury.