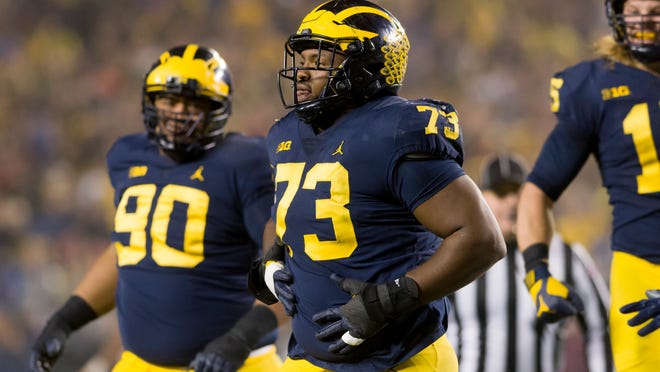 Indianapolis — Maurice Hurst had heard the story, so when he saw the last name, he had to ask.

The former Michigan defensive tackle was still trying to process the news that a routine medical exam he underwent Friday at the NFL scouting combine had detected a heart condition. And while that meant he wouldn’t take part in strength tests or on-field workouts this weekend with the rest of his position group here at Lucas Oil Stadium, Hurst, one of the top-rated prospects in this year’s draft, did take part in an informational meeting Saturday with the NFL Players Association.

And that’s when he approached Utah’s Lowell Lotulelei, whose brother endured a similar shock five years ago at the combine when his echo cardiogram showed abnormal results.

“He just asked me, ‘Star was your brother?’” the younger Lotulelei said Saturday afternoon, while Hurst’s scheduled availability was canceled. “And I said, ‘Yeah.’ And he said, ‘Man, I just got the same thing that he did,’ just explaining it to me.

“Obviously, I didn’t go through it, so I don’t know what he’s feeling like. But I kind of understand the disappointment, because my brother trained for it just like he trained for it. And was expecting one thing and getting another. So, I feel for him. It sucks. But I think he’ll be fine, just like my brother was.”

Lotulelei did eventually get medical clearance from a cardiologist back in 2013 as further testing eased concerns for NFL teams and Lotulelei — projected as a top-five pick by most analysts — ended up getting selected by the Carolina Panthers with the 14th overall pick.

But Hurst, 22, has significant questions to answer as he leaves the combine, headed home to undergo further testing next week, according to an ESPN report. Depending on those exams, he’ll also likely be among the players brought back to Indianapolis in mid-April for medical re-checks prior to the draft.

Hurst earned All-America honors in 2017, anchoring a dominant defensive line for the Wolverines after bypassing the draft to return for his senior season. After skipping last month’s Senior Bowl to train for the combine in California, he arrived in Indianapolis on Thursday to begin the interview process, then checked in at just over 6-foot-1 and 292 pounds at Friday’s official weigh-in — up about 10 pounds from his college playing weight.

NFL Network analyst Mike Mayock rated Hurst the third-best defensive tackle in this year’s draft. And he was a player often paired with the Lions in mock drafts.

“In today's NFL, you've got to get after the quarterback and be disruptive," ESPN analyst Mel Kiper said recently. "That's what Maurice Hurst is.”

But Hurst’s draft outlook now is unclear as teams await more information. And that news weighed heavily on some of his Michigan teammates, including linebacker Mike McCray who found out when Hurst shared the news in a group chat with many of them.

“He was down about it a little bit,” said McCray, who also is in Indianapolis for the combine. “I tried to give him some words of encouragement, telling him he’s gonna be all right. Trust in God, and he’ll be all right.”

McCray spent much of the last two months prepping for the combine with Hurst and fellow UM teammate Mason Cole at the EXOS training facility in San Diego.

“He was extremely excited (for the combine),” McCray said. “He wanted to come out here and show that he’s the best defensive tackle in the draft. And I feel like he is, still, even though he won’t be able to compete here. But that was one of his goals, to come out and show everybody he’s the best.”

Instead, he’ll have to come out and show everybody he’s not a medical risk.

Kimberly Jones of the NFL Network said Hurst told her, "I'm fine," and that he was optimistic he would be able to participate in Michigan's pro day on March 23.

The Lions selected defensive tackle Nick Fairley in the first round of the 2011 draft despite him being diagnosed with an enlarged heart. But now Fairley’s career may be over after the New Orleans Saints released him earlier this month, citing a heart condition detected shortly after he signed a four-year, $28 million contract extension with the team last March.

Both sides have filed grievances with the league’s arbitrator in a financial dispute over the matter.

Meanwhile, Star Lotulelei, who has been a run-stuffing presence for Carolina the last five seasons, is up for a new contract this offseason and could be one of the top available free agents on the market.

And that was all the solace the younger Lotulelei could offer Hurst on Saturday.

“It was just tough, because he played four years of football and never heard anything about his heart from anyone,” Lotulelei said of his brother. “He played a lot of snaps every game, and nothing ever happened until he came here (to the combine.) I think it’s the same thing for Maurice. He’s been playing football and obviously, he’s gotten here without any problems or hearing anything about it. I think that’s the real disappointment. It’s a surprise, and you’re not expecting it.”