The most important takeaway from Friday's practice might be that two players who could be pivotal to Green Bay’s success are healthy again. 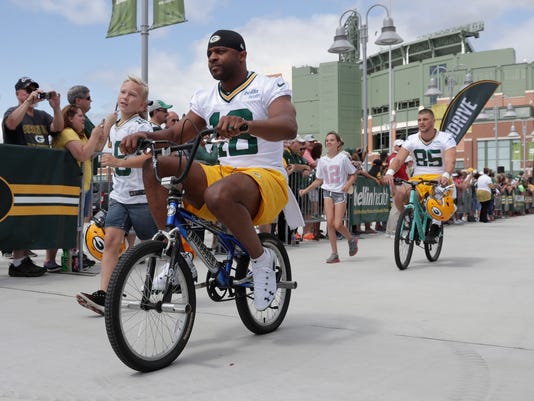 Green Bay, Wis. — One of the first passes thrown by Aaron Rodgers in Green Bay Packers camp was as noteworthy for who was competing for the ball as much as the play’s result.

Cornerback Kevin King, locked in coverage deep against receiver Randall Cobb, appeared to wrestle away an interception, though the ever-competitive quarterback disputed that call.

“Yeah, I’m a head coach so I thought it was an excellent play by both guys,” McCarthy said Friday, drawing laughs. “I like the way Randall finished with the ball but I like the position that Kevin was in.”

Outcome aside, the most important takeaway might be that two players who could be pivotal to Green Bay’s success are healthy again.

Cobb revealed Friday that he had ankle surgery after offseason workouts. He was spotted at an airport with a walking boot on his right foot last month.

Doctors “went in and pretty much just removed a piece of cartilage that was giving me some problems,” Cobb said. “Obviously not that big of a deal. But feeling a lot better than I did before.”

Enough so that the senior member of the Packers receiving corps is a full go in camp.

“I think the first call, the first play … where the ball goes deep to Randall, I think that tells you the kind of shape (Cobb is in),” McCarthy said.

Cobb’s health is important for a receiving corps that lost Jordy Nelson after the respected veteran was cut in the offseason in a money-saving move. It left Cobb and Davante Adams as the Packers’ top wideouts, plus a bevy of young players competing for targets that once went to Nelson.

“At this point, it’s just getting my conditioning back. I was here the entire offseason working with our strength and conditioning staff trying to get back and get right,” Cobb said.

King had left shoulder surgery after his injury-shortened rookie year. The shoulder maligned him for much of last season, and King was limited to individual workouts in the offseason as he recovered.

But King is a full go now, and his interception against Cobb in practice Thursday offered a glimpse of King’s full potential when healthy. He is talented enough to be the Packers’ top cornerback.

King wasn’t done. On the next play, he broke up a throw for receiver Geronimo Allison and ended up hitting the ground.

“I could have done that last year,” King said in the locker room.

The shoulder no longer hurts, King said. The injury during his rookie season also sharpened his mental game.

“Mentally, it elevated me. It’s been positive for me,” King added.

A healthy King could do wonders at a cornerback position beleaguered by injuries the last couple of years. The 6-foot-3 King has the length to play effective press coverage for new defensive coordinator Mike Pettine.

Now King just needs to stay on the field after making 31 tackles in nine games last season, including five starts.

“There’s no question about Kevin’s ability and his level of talent and the ability to play,” McCarthy said. “Yes, he made two competitive plays on the ball. … The biggest thing I’m happy about is Kevin’s healthy and he’s come back from the shoulder surgery and is off to a good start.”

Former Pro Bowl cornerback Jason Verrett tore his Achilles tendon during a conditioning test, one day before the first practice of Chargers camp.

... Quarterback Sam Darnold, the No. 3 overall draft pick, officially became a contract holdout when the Jets began their first practice without him.

... Jets wide receiver ArDarius Stewart was suspended by the NFL without pay for the first two games of the regular season for violating the league’s policy on performance-enhancing substances.

... New York Giants general manager Dave Gettleman said the aggressive cancer he was diagnosed with five weeks ago is in remission.