Lions' next opponent: Saints get revenge for 'miracle' against Vikings

Drew Brees and the Saints paid Minnesota back for their last-second loss in the playoffs last season, using two key turnovers to fuel a 30-20 victory.

Lions' next opponent: Saints get revenge for 'miracle' against Vikings 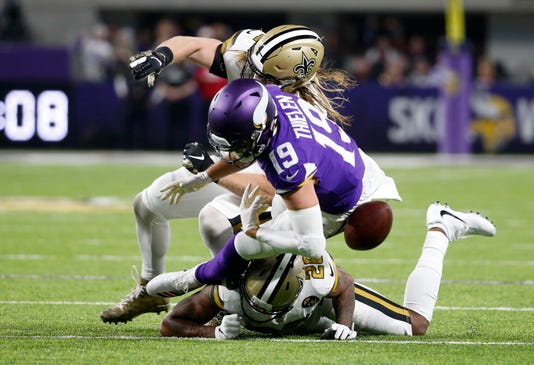 Minneapolis — No miraculous play was needed for New Orleans to win this game in Minnesota, no where-were-you moment that instantly went viral.

Drew Brees and the Saints simply scored some revenge for their last-second loss in the playoffs last season by taking advantage of two key turnovers, including a 45-yard interception return for a touchdown by P.J. Williams, in a 30-20 victory over the Vikings on Sunday night.

“This one had a little extra special meaning,” Brees said, flashing a slight smile after he went 18-for-23 passing to maintain his league-leading 77.4 completion percentage.

Alvin Kamara scored twice, Wil Lutz made three field goals and Sheldon Rankins had two of the four sacks by the Saints (6-1), who needed only 120 passing yards by Brees to beat the Vikings (4-3-1) this time with far less tension down the final stretch and stay undefeated in four road games this year.

“It’s everything we wanted it to be,” Rankins said.

Stefon Diggs had 119 receiving yards and a score in his curtain call after the “Minneapolis Miracle” catch in the NFC divisional round here in January, but he stopped his drag route in a miscommunication with quarterback Kirk Cousins right before Williams picked the ball off for the pivotal third-quarter touchdown.

Adam Thielen had another record-setting performance for the Vikings with 103 yards and a score, but he lost a fumble that was returned 54 yards by Marshon Lattimore to set up the go-ahead touchdown for the Saints.

“We’re a really good football team, but you can’t make mistakes in this league and win, especially on critical situations when you have the ball in the red zone,” Thielen said. “Obviously I’m going to think about that one for a while, and I’m definitely disappointed in myself.”

The Vikings had the edge on both sides of the ball during the first half. Harrison Smith handed Brees his first interception of the season after 231 attempts without one, putting the Vikings in position to stretch a 13-10 lead.

Late in the second quarter, Thielen drove forward for extra yards after a short completion and had the ball pried loose by Williams and Alex Anzalone at the 14. Lattimore scooped it up and raced the other way, before Laquon Treadwell took him down. Treadwell then slammed his helmet on the turf in frustration, drawing a devastating 15-yard penalty to give the Saints the ball at the 18 with 57 seconds remaining before halftime. Kamara soared into the end zone two plays later.

“I was giving up a few plays,” Williams said, “but a turnover always turns the game around.”

The Vikings started the second half with the ball and went for it on fourth-and-1 at their own 45. With an empty backfield, Cousins had Treadwell open over the middle, but Lattimore broke up the pass to change possession and set up Lutz’s second field goal.

“I told the team I was going to be aggressive,” coach Mike Zimmer said. “Every fourth down that was close, we were going to go for it.”