The NFL’s lone undefeated team has just made an already dominant defensive front even deeper. 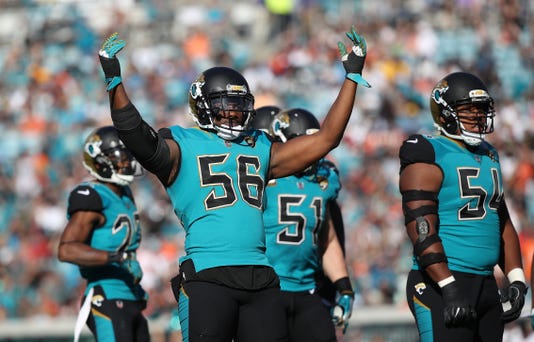 The NFL’s lone undefeated team has just made an already dominant defensive front even deeper.

The Los Angeles Rams swapped a pair of draft picks for Jaguars pass rusher Dante Fowler on Tuesday, adding the third overall pick in 2015 to a defense already stocked with Aaron Donald, Ndamukong Suh, Michael Brockers and Mark Barron for the most surprising move at the NFL trade deadline.

The Rams gave up a third-round pick in 2019 and a fifth-rounder in 2020 for Fowler, who is a free agent at the end of this season. Fowler became expendable with Yannick Ngakoue’s success, and the Jaguars already opted in 2017 not to pick up the fifth-year option on Fowler’s rookie deal.

Fowler has two sacks in seven games while playing behind Ngakoue.

With the Broncos at 3-5, Denver general manager John Elway made a move to clear both some salary cap space and more playing time for some of his younger receivers. Thomas has a salary cap figure of $15.53 million for 2019, the last year of his deal, while rookies Courtland Sutton and DaeSean Hamilton and second-year Tim Patrick are much cheaper.

The Texans (5-3) have won five straight to take the lead in the AFC South and had to replace Will Fuller who tore a knee ligament i n a win over Miami last week. Houston sent a 2019 fourth-round pick to Denver with the teams swapping seventh-rounders in next year’s draft.

Thomas is a nine-year veteran with 36 catches for 402 yards this season. Elway said the Texans beat out three or four other teams for the veteran.

“It’s never easy when you trade a guy that’s been a household name around here for a long time and done a lot of great things, not only on the football field but also in the community, and is a good man,” Elway said.

“Plus, it’s a good spot for Demaryius. He’s going to a good football team that’s in a pennant race. So, it’ll be good for him, too.”

The defending Super Bowl champions Eagles (4-4) have their bye this week and could lose Tate after this season if he leaves in free agency.

“We’re not going to sit on our hands,” Eagles personnel boss Howie Roseman said. “It’s hard to find really good players and this is a really good player. The message to our players, our coaches and our fans is that our foot is always going to be on the gas.”

Tate, 30, has 44 catches for 517 yards and three touchdowns this season and joins an offense that already has Alshon Jeffery, Nelson Agholor and Jordan Matthews and tight ends Zach Ertz and Dallas Goedert. Tate can help the Eagles be less predictable with his ability to play in the slot.

He averaged 93 catches, 1,056 yards receiving and five TDs the past four seasons in Detroit after spending his first four with Seattle. If Tate leaves after the season, Philadelphia likely would receive a compensation pick.

Tate wrote on Twitter: “It’s been real DETROIT! I’ll love ya forever. Philly Philly let’s get it!!” He then posted a GIF of fictional Philly icon Rocky Balboa jumping up and down on the steps of the Art Museum with the caption: “Mood.”

The Packers made a couple of moves, trading away Ty Montgomery two days after his late fumble on a kickoff kept Green Bay and Aaron Rodgers from a late chance to hand the Rams their first loss this season. They sent the running back and kick returner to Baltimore.

They also sent safety Ha Ha Clinton-Dix to Washington for a fourth-round draft pick in 2019 as the Redskins (5-2) boosted a stingy defense.

The Ravens sent a seventh-round pick to Green Bay (3-3-1) for Montgomery , who had been told to take a touchback if the kickoff with about two minutes left in a 29-27 loss to the Rams went into the end zone. A third-round pick in 2015, Montgomery has 1,676 yards from scrimmage for his career.

Giants rookie backup quarterback Kyle Lauletta has been arrested on motor vehicle and related disorderly persons offenses while driving near a road construction site to practice.

Weehawken police said the 22-year-old Lauletta was stopped Tuesday morning for failing to obey a police officer’s order to continue driving straight in his 2017 Jaguar.

The report says Lauletta almost hit the officer while making an illegal turn. He was stopped by a second police officer and refused to produce a driver’s license or exit the car. Police said Lauletta’s car was involved in a similar incident Monday, but summons were mailed because the vehicle did not stay at the scene.

Raiders cornerback Dominque Rodgers-Cromartie abruptly retired, two days after not playing a single snap on defense for the second time this season.

... Bills quarterback Derek Anderson has been diagnosed with a concussion suffered in Monday night’s loss to the Patriots, leaving open the possibility of Buffalo starting Nathan Peterman against the Bears this weekend.

... 49ers quarterback C.J. Beathard missed practice with an injured right wrist that could keep him out of Thursday night’s game against the Raiders.

... The Seahawks released wide receiver Brandon Marshall, whose role within the offense had diminished significantly.

... Steelers quarterback Ben Roethlisberger is dealing with a broken index finger on his left hand.