Jared Goff's 40-yard strike to Gerald Everett with 1:49 decides thriller where more than 100 points were put on the board. 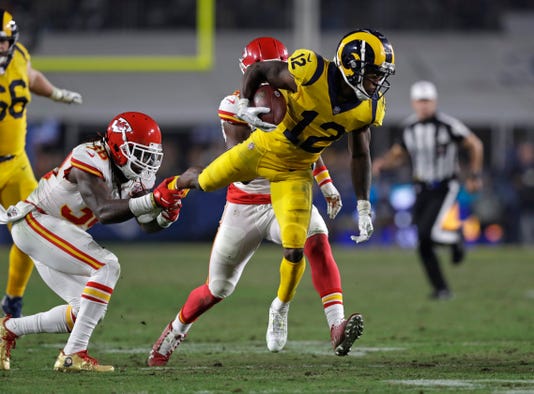 Los Angeles — Jared Goff threw a 40-yard touchdown pass to Gerald Everett for the go-ahead score with 1:49 to play, and the Los Angeles Rams outlasted the Kansas City Chiefs for a 54-51 victory on Monday night in a high-octane NFL offensive showdown that somehow surpassed the hype.

Patrick Mahomes passed for a career-high 478 yards with six touchdown passes in his latest jaw-dropping effort for the Chiefs (9-2), but he also threw two interceptions in the final 1:18 as the Rams (10-1) claimed the highest-scoring Monday night game ever played and the first NFL game with two 50-point performances.

Goff passed for 413 yards and four touchdowns and rushed for another score, while Marcus Peters and Lamarcus Joyner came up with late interceptions as the Rams hung on to win a game featuring 14 touchdowns.

The highest-scoring game in the league this season was an offensive fantasia with 1,001 combined yards and ingenious scheming from mastermind coaches Andy Reid and Sean McVay — along with three defensive touchdowns and 21 combined penalties.

“It was a whirlwind,” McVay said. “I feel like I might need a couple of beverages to relax tonight, but it was great. This is what you love so much about the game.”

The Coliseum’s first Monday night game since 1985 was worth the wait— particularly for the thousands of first responders and families who received free tickets to the game while recovering from the dual tragedies of wildfires and a mass shooting in Thousand Oaks.

If this video-game-like spectacle turns out to be a Super Bowl preview, Atlanta should prepare for an All-Madden-level show from two of the most exciting teams in the league.

Rams linebacker Samson Ebukam returned a fumble and an interception for the first two TDs of his NFL career, while Kansas City’s Allen Bailey returned Goff’s fumble for a go-ahead touchdown early in the fourth quarter.

The second half was an extended thriller featuring 59 combined points, but the Rams made slightly more big plays down the stretch.

“We can learn from this,” Reid said. “We can’t give up 21 points on turnovers. Have to take care of the football. We created some turnovers and points, (but had) too many penalties. We’ll heal up and get set to go for stretch run.”

After Goff led a 75-yard scoring drive in 89 seconds for the go-ahead TD to Everett, Peters — the former Pro Bowl cornerback traded by Kansas City to Los Angeles last winter — intercepted Mahomes’ underthrown ball near midfield with 1:18 to play.

The Rams only managed to get 14 seconds off the clock on their next three plays, and the Coliseum roiled in anticipation of a big finish by Mahomes. But the Chiefs were pushed back to their 13 with 50 seconds left thanks to a booming punt by Johnny Hekker, and Joyner intercepted Mahomes’ final desperate heave with 13 seconds left.

This game has loomed in capital letters on the NFL’s regular season schedule ever since these teams confirmed their status as offensive powerhouses in September. The Rams and Chiefs are the league’s biggest favorites along with New Orleans and New England— the teams responsible for the only other losses by Los Angeles and Kansas City this season.

“It’s always fun to play against real good teams,” Mahomes said. “You get to go out there and have fun … (but) it’s the same as when we played New England. You can’t make mistakes against great teams. You need to limit your mistakes, but be aggressive.”

Before both offensive powerhouses hit their bye weeks ahead of the regular-season stretch run, they both demonstrated the full depth of their talents for a prime-time audience.

And for all the offensive brilliance on display, both defenses made game-changing plays as well.

Aaron Donald forced two fumbles while sacking Mahomes, and Ebukam returned the first for a TD in the second quarter. The Rams’ unsung outside linebacker then made a spectacular one-armed interception at the line of scrimmage in the third quarter before returning it 25 yards for a score, powering over Mahomes to reach the end zone.

A raucous crowd packed the venerable Coliseum just six days after the NFL moved the game from Mexico City to Los Angeles due to poor field conditions at Azteca Stadium.

The first half was every bit as entertaining as expected, with two high-level offenses immediately trading long drives and quick-strike TD plays. The teams combined for 462 yards before halftime, and the only things slowing down the Chiefs were penalties — eight in the first quarter alone.

Los Angeles led early until Bailey swung the momentum when he sacked Goff, forcing and recovering the quarterback’s first lost fumble of the season.

Donald then made a massive play of his own, swatting the ball out of Mahomes’ hand for Ebukam’s scoop-and-score TD just 1:50 before halftime.

Donald made his second strip-sack of Mahomes shortly after halftime, and Goff scrambled for the third rushing TD of his career moments later.

The Los Angeles Rams honored those impacted the past two weeks by the shooting at a Thousand Oaks bar and wildfires in Los Angeles and Ventura counties before Monday night’s game against the Kansas City Chiefs.

The California Lutheran University Choir — which lost a former member in the Nov. 7 shooting rampage at a country and western bar that killed 12 — sang the national anthem.

Firefighters who have battled the Southern California wildfires the past two weeks received tickets to the game.

The fire erupted Nov. 8 and powerful Santa Ana winds pushed it through suburbs and wilderness parkland in Los Angeles and Ventura counties, forcing thousands of people to flee.

Colt McCoy knew what his teammates needed to hear.

In the aftermath of a gut-wrenching two-point loss and the sickening season-ending injury to Alex Smith, McCoy stood up in the Washington locker room and addressed the group.

McCoy “told us we were in good hands,” running back Chris Thompson said. “We had no doubt about that from the jump.

“We lost the game, but I will say Colt talking to us afterward really had the dudes hyped up and we’re ready to get to Dallas.”

Washington signed Mark Sanchez on Monday to serve as the new backup, but this is McCoy’s show now after Smith broke his right tibia and fibula in gruesome fashion.

McCoy will start Thursday when Washington visits the Cowboys in a Thanksgiving showdown that will go a long way to determining who wins the NFC East.

Until Sunday, McCoy, 32, hadn’t thrown a pass in a regular-season game since 2015. The Cowboys game will be his first start since 2014.

The defending champs are reeling and seem on the verge of receiving a knockout punch.

An embarrassing 48-7 loss to the New Orleans Saints — the most lopsided defeat for a Super Bowl champion — left the Philadelphia Eagles (4-6) one loss from last place.

They’re optimistic because they are in control of their fading playoff hopes in a mediocre NFC East. But there’s nothing positive to point at following a dismal loss to the Saints (9-1).

“You can’t hang your head,” coach Doug Pederson said Monday. “If anybody does, and if anybody begins to sort of doubt, you don’t need them.

The Titans need the extra day off before their next game both to allow injuries to heal and figure out what went wrong in their worst loss this season.

Marcus Mariota is recovering from a stinger that knocked him out of the Titans’ 38-10 loss to the Colts, not the elbow injury announced during the game.

Coach Mike Vrabel said all tests were positive on defensive coordinator Dean Pees, who returned to Nashville on Monday. Pees spent a night in an Indianapolis hospital after an issue forced him from the coaches’ box early in the game.

Vrabel also said he is hopeful Mariota will play when the Titans visit Houston on Nov. 26 and Pees also will return to work.

The NFL announced it will return to Mexico City with a regular-season game next year. Less than a week ago the league moved the high-profile Chiefs-Rams matchup from Azteca Stadium to Los Angeles because of the poor playing conditions at the Mexico venue.

... Cowboys rookie receiver Michael Gallup is away from the team after being told following a victory in Atlanta that his brother had died by suicide.

... Coming off their best offensive performance of the season — and an extra week of rest — the Bills have starting quarterback Josh Allen back.

... Dolphins quarterback Ryan Tannehill has made progress in his rehabilitation from a throwing shoulder injury, but the timing of his return remains uncertain.