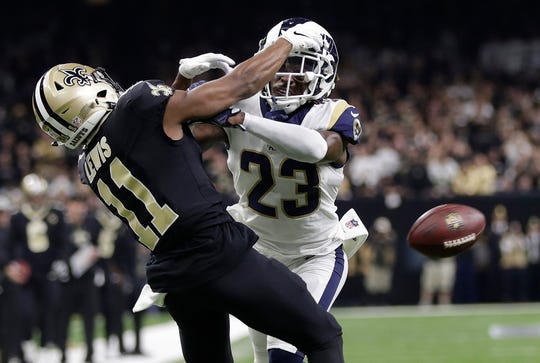 Expanding replay has become a scorching topic since the NFC championship game, when a non-call on a blatant pass interference and helmet-to-helmet hit by Rams defensive back Nickell Robey-Coleman likely cost the Saints a trip to the Super Bowl. (Photo: Gerald Herbert, Associated Press)

Plano, Texas — Veteran NFL referee Tony Corrente was quick to make the distinction about what changes now that pass interference can be challenged by coaches and reviewed by officials.

The significant difference, however, is the subjective nature of plays that are typically judgment calls that can now be reviewed, beyond objective standards such as whether a player stepped out of bounds or where the ball should be marked.

“That’s the new box we’ve opened,” said Corrente, going into his 25th season as an NFL official and 22nd as a referee.

All 122 NFL game officials are taking part this weekend in their annual clinic. The gathering comes about four months after NFL owners approved by a 31-1 margin to allow pass interference or non-calls to be challenged by coaches until the final two minutes, when officials in the booth can then stop the game for such reviews.

It is an one-season experiment that could very well stick after an egregious missed call in the NFC championship game in January that cost the New Orleans Saints a trip to the Super Bowl .

The NFL competition committee in May decided against making any changes to the new rule approved by owners.

“We understand the play that elevated and got us to where we are today,” said Alberto Riveron, the NFL’s senior vice president of officiating.

But Riveron stressed that league officials have been discussing the possibility of such reviews for several years, long before the non-call in the closing minutes of regulation after Saints receiver Tommylee Lewis was hit by cornerback Nickell Robey-Coleman in a game the Los Angeles Rams went on to win in overtime.

“The competition committee and ownership is constantly looking at ways to get better. We have discussed replay before as it pertains to other situations. Pass interference, holding, personal fouls,” Riveron said. “But we do understand a play of this magnitude elevated us to the point where we are today. But again, it’s not new.”

Referee Ron Torbert said officials won’t change their approach or what they do on the field. He said the change is just an addition to the list of situations that are subject to review by instant replay.

“We’ll still do what we’ve always done, which is try to get every play right,” Torbert said.

During the rule’s one-year trial this season, coaches still can challenge until the two-minute warning of each half or overtime. A replay official would be responsible for any reviews after that, but would need “clear and obvious visual evidence” to review and overturn potential pass interference in an attempt to avoid too many stoppages.

The replay official will have only the angles on the television broadcast available to overturn an on-field decision. Pass interference still is defined as an act significantly hindering the opportunity to make a play on a ball, and all pass plays will be subject to review.

When there are such reviews, Torbert and Corrente said referees will be part of a collaborative effort with Riveron and replay officials in New York looking at the plays. The referees can relay why an official called pass interference – or why they didn’t throw a flag.

“That collaboration occurs with any reviewable play,” Torbert said. “Not just pass interference.”

The Packers reported a profit of just $724,000 in their latest fiscal year, which included their second straight season without a playoff appearance, a large contract extension for quarterback Aaron Rodgers and change in head coach from Mike McCarthy to Matt LaFleur.

While overall revenue increased 5.1% to $477.9 million, local revenue improved by only 2.3%, hurt by consecutive losing seasons that impacted Pro Shop visits and tours of Lambeau Field and the Packers Hall of Fame.

The NFL’s collective bargaining agreement is set to expire after the 2020 season and the team has $397 million in its corporate reserve fund.

Raiders guard Richie Incognito has been suspended without pay by the NFL for the first two games of the regular season for violating the league’s personal conduct policy.

... Jets second-year tight end Chris Herndon has been suspended without pay by the NFL for the first four regular-season games for violating the league’s substance abuse policy.