Ben Roethlisberger’s season is over, while Drew Brees' season is put on hold. 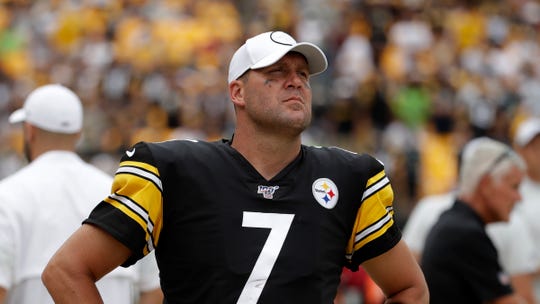 Pittsburgh — Ben Roethlisberger’s season is over.

The Pittsburgh Steelers quarterback will undergo surgery on his right elbow and be placed on injured reserve, ending the 37-year-old’s 16th season just two weeks in.

Roethlisberger injured the arm late in the second quarter of Sunday’s 28-26 loss to Seattle. He did not play in the second half, watching from the sideline as backup Mason Rudolph took over.

Roethlisberger, who led the NFL in passing last season, signed an extension in March that runs through the 2021. There was no immediate timetable on his possible return.

Pittsburgh (0-2) will now move on with Rudolph, taken in the third round of the 2018 draft. Rudolph went 12 of 19 for 112 yards with two touchdowns and an interception against Seattle in the first regular-season snaps of his career.

The Steelers play at San Francisco (2-0) next Sunday.

Saints quarterback Drew Brees has been diagnosed with a torn ligament near the thumb of his throwing hand that is expected to sideline him at least six weeks, said a person familiar with the situation.

Brees has elected to have surgery, but it is not yet clear when the operation will take place or who will perform it, the person said. The person spoke to The Associated Press on condition of anonymity Monday because the diagnosis has not been announced.

Brees left Sunday’s game against the Los Angeles Rams in the first quarter after the thumb on his right hand hit the hand of on-rushing Rams defensive lineman Aaron Donald on the follow trough of a throw.

The Saints lost the game 27-9, with backup Teddy Bridgewater going 17 for 30 passing for 165 yards during the last three-plus quarters.

Brees has missed only one full game because of an injury in his previous 13 seasons with New Orleans. The Saints narrowly lost that game, with Luke McCown at quarterback, at Carolina during the 2015 season.

Brees is the NFL’s all-time leader in completions with 6,621 and yards passing with 74,845. His 522 touchdowns tie him for second all-time with New England’s Tom Brady (Michigan), 17 behind retired former Indianapolis Colts and Denver Broncos quarterback Peyton Manning.

The Saints are practicing this week in the Seattle area before playing the Seahawks on Sunday. New Orleans’ five games after they play Seattle are against Dallas, Tampa Bay, Jacksonville, Chicago and Arizona, followed by a Week 9 bye.

Bridgewater, who returned this season on a one-year, free-agent deal, is the primary backup. Taysom Hill, who plays a variety of skill positions on offense and also plays on special teams, is the third-string QB. It remains to be seen how his playing time at various positions will be affected if he is elevated to second-string QB while Brees is out.

At 1-1, the Saints are tied for first place in the NFC South.