The Jaguars have until May 3 to exercise the fifth-year option on Fournette’s contract, which is $10.1 million.

Jacksonville, Fla. — The Jaguars have reportedly been in trade discussions with several teams regarding running back Leonard Fournette.

ESPN’s Adam Schefter reported that the Jaguars are actively listening to offers ahead of Thursday’s NFL draft. 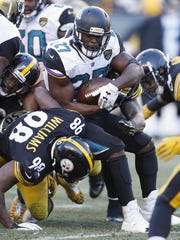 The Jaguars have until May 3 to exercise the fifth-year option on Fournette’s contract, which is $10.1 million. The fifth-year is guaranteed for injury when the option is exercised.

Fournette, who was the fourth overall pick by the Jaguars in the 2017 draft, overcame a difficult 2018 season that included injuries and maturity issues by rushing for 1,040 yards and scoring nine touchdowns last season.

On Thursday, Fournette made a guest appearance on ESPN’s “First Take” show to pitch for quarterback Cam Newton to join him in Jacksonville. Fournette said he wants the Jaguars to be in the best position going into the 2020 season and there’s no disrespect to Gardner Minshew, the projected starting quarterback.

Fournette also posted a cryptic tweet this past Wednesday when he wrote how one person destroyed the 2017 AFC championship team, but he never mentioned the name.

It’s speculated that Fournette was referring to former top football executive Tom Coughlin, who was fired in December after the NFL Players Association sent a letter to the league’s players that revealed over 25% of the grievances filed by players had been against the Jaguars.

“Calais Campbell, they got rid of my dog,” Fournette said. “I’m hurt, first those are my dogs. ‘Don King’ Jalen. And my dog, Yan (Yannick Ngakoue). Come on now … They’re just killing me right now. I’m just so hurt, it feels like my girl has broken up with me. She left to go with somebody else.”

After the Jaguars agreed to trade cornerback A.J. Bouye to the Denver Broncos for a fourth-round pick, Fournette took to social media to tweet a photoshopped picture of himself as Will Smith in “The Fresh Prince of Bel-Air,” standing alone in an empty house.

Unlike former Jaguars cornerback Jalen Ramsey or Ngakoue, Fournette has not publicly said he wants out of Jacksonville. The Jaguars traded Ramsey, who is a close friend of Fournette, to the Los Angeles Rams last October.

The Jaguars exercised the non-exclusive franchise tag on Ngakoue, but he continues to vent about not wanting to play for the franchise.

“Let’s agree to disagree,” Ngakoue wrote on a Twitter post on his March 31 birthday. “Why hold a man from taking care of his family. It’s obvious my time is up in my current situation. Let’s both move on.”

Meanwhile, linebacker Jake Ryan rarely got on the field for the Jaguars last season due to injuries after playing in only two games.

But that did not sway the Ravens from agreeing to a one-year contract with Ryan on Saturday, pending Ryan passing a physical examination.

The Jaguars declined the option on Ryan’s contract in February, which allowed him to become a free agent.

The Athletic’s Bob McGinn reports that ex-Alabama star quarterback Tua Tagovailoa scored a woeful 13 on the Wonderlic test, administered by the NFL to draft prospects before the draft.

Among the other first-round prospects, McGinn reported that LSU’s Jake Burrow scored a 34, Utah State’s Jordan Love got a 27 and Oregon’s Justin Herbert had a 25.

The highest reported score among the 2020 quarterback draft prospects was a 40 by Iowa’s Nate Stanley.

Quarterbacks have brushed off a low Wonderlic to star in the league. Dolphins Hall of Famer Dan Marino’s score in 1983 was widely reported to be a 16, and Ravens defending NFL Most Valuable Player Lamar Jackson was reported to have the same score as Tagovailoa two years ago.

The Ravens have reached a one-year deal with veteran inside linebacker Jake Ryan (Michigan), according to media reports, adding depth to one of the team’s thinnest positions just five days before the start of the NFL draft.

The deal with Ryan, who played sparingly last season in Jacksonville, is pending a physical. Terms have not been disclosed.

After tearing his ACL in training camp in 2018 with Green Bay, where he spent his first four years, Ryan played in just two games for the Jaguars. Ryan, who started last season on the reserve/nonfootball injury list, appeared exclusively in special teams action. In February, Jacksonville declined to exercise the second-year option on his two-year, $7.5 million deal.

Over his first three years with the Packers, the 6-foot-2, 240-pound Ryan appeared in 43 games (27 starts) and totaled a combined 144 tackles, as well as a sack and a forced fumble. He played a career-high 61.8% of the defensive snaps in 2016, carving out a role with his solid run defending.

Running back Brian Hill has signed his $2.13 million tender offer to remain with the Atlanta Falcons, the team says. The restricted free agent received an original-round tender last month, giving the team a right to match any offer Hill received from another team or accept a fifth-round draft pick as compensation.

Hill played in 12 games with two starts in 2019, rushing 78 times for 323 yards and two touchdowns along with 10 catches for 69 yards and one TD. He’ll be among the backups vying for playing time behind newcomer Todd Gurley.