The New York Jets have quarterback Geno Smith’s back despite the team’s 1-2 start. 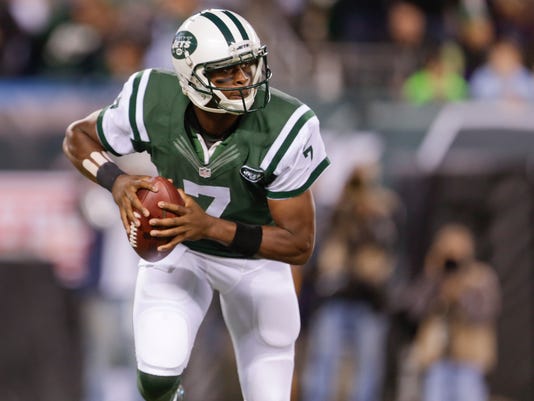 Allen Park – — New York Jets quarterback Geno Smith has shown improvement in nearly every aspect of his game in his second season, including a higher completion percentage and lower interception rate.

But with a 1-2 start and Michael Vick sitting on the bench, there already have been suggestions from the New York media that Smith lose his starting job. Smith, though, doesn’t feel any more pressure to perform as he prepares to face the Lions Sunday.

“They don’t exist within our locker room,” he said of the criticisms on a teleconference this week. “They don’t exist around here, and honestly the outside factors really don’t mean much to myself or anyone else around me so I don’t have to deal with it at all. My only goal is to go out there and try and help my team win games and to make winning plays.”

Jets coach Rex Ryan backed his starter, too, and noted that Smith helped the Jets win three of their final four games last season to nearly earn a wild-card berth at 8-8.

“Absolutely, this team believes in Geno Smith and I certainly champion that cause, as well,” Ryan said. “He’s a much more talented quarterback and a better quarterback than he’s given credit for.”

So far this season, Smith, a second-round pick in 2013, is completing 63.1 percent of his passes, which is higher than Lions quarterback Matthew Stafford. He’s thrown three touchdowns and four interceptions and has run for 84 yards on 20 carries.

Vick, who Smith said always has been supportive, has played six snaps but produced positive yardage on just one play. The Lions will prepare for the Jets’ package with Vick, but defensive coordinator Teryl Austin said it wouldn’t be a top priority.

“It’s in there and you know it’s going to be in there, but it’s a small part of what they’ve done,” Austin said. “So you prepare for the things that’ll actually beat you.”

That’s the running game, where the Jets rank second in the NFL, averaging 157.7 yards. And the Smith-led passing game.

“Quarterback is a hard position to play in this league, and what you see is he’s more comfortable in there,” Austin said.

Looking at Jets film the first three weeks, Austin said Smith has looked patient in the pocket and confident checking into the right plays.

If wide receiver Eric Decker can play Sunday, the Jets offense will be a bigger test for the top-ranked Lions defense. Decker missed most of the Week 3 loss to the Bears in which Smith threw for 316 yards.

The Lions also are worried about Smith’s ability to run, even though he’s not quite as fast as Vick. Smith ran for 366 yards and six touchdowns in 2013, which was more than in any of his three seasons as a starter at West Virginia.

“He can run, and not just in terms of decent speed. This guy can hurt you,” Lions coach Jim Cadlwell said. “He can certainly change field position with his feet, but he also is a very skilled passer as well. And I think you just see him getting better and better each and every week, so that’s a challenge.”

Smith realizes that he has to continue showing improvement for the Jets to reach their potential, but that could be difficult against a Lions defense that ranks No. 1 overall through three games and held Aaron Rodgers to just 162 yards passing in Week 3.