The Lions have had six different players represent the team as captains in the two exhibition games thus far, and there probably will be six others who run out for the coin toss in the final two games. 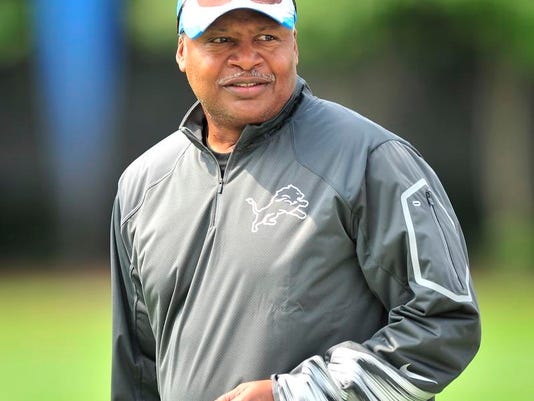 Lions coach Jim Caldwell says captains are chosen for their leadership traits, “but they also have to be able to produce.”(Photo: Daniel Mears/Detroit News)

The Lions have had six different players represent the team as captains in the two exhibition games thus far, and there probably will be six others who run out for the coin toss in the final two games.

Those players are all on coach Jim Caldwell’s “leadership council,” and even if they aren’t among the captains this year, their presence for the coin toss the past two weeks gives an early indication of which players are among the locker room leaders.

Wide receiver Calvin Johnson, safety Glover Quin, cornerback Rashean Mathis and running back Reggie Bush are all safe bets to be on that leadership council, too. Tight end Brandon Pettigrew likely represents his position as the veteran of his group.

Ultimately, the naming of captains before the regular season won’t determine wins or losses, but Suh’s presence shows that the coaching staff still values him as a leader despite the external criticism after he missed voluntary workouts this offseason.

Of course, Suh missed voluntary workouts last year and was named a captain, so his absence this year surely will have little to do with whether or not he earns a patch.

Caldwell said he has a plan for how the team will determine captains in 2014, but declined to share it last week because he hadn’t yet told the players.

Since being hired in January, Caldwell has often discussed the importance of leadership, and most of the free agents the team signed this offseason — particularly receiver Golden Tate, safety James Ihedigbo and defensive end Darryl Tapp — all have good leadership traits.

But being a good leader doesn’t ensure a player’s spot on the roster, which is why it was a bit surprising to see Owens as a captain in the first exhibition game. He’s a great leader, no doubt, but he and fullback Jed Collins are locked in one of the tightest battles for a roster spot.

“It still boils down to production. That’s always the key,” Caldwell said. “Obviously leadership plays a part because some guys have an inordinate amount of influence on the rest of their teammates, but they also have to be able to produce. That’s part of leadership.

“You don’t find many leaders that aren’t good at what they do, that don’t have a prominent role, as well. But we’ll look at those things and take all of that into consideration, and it’ll work itself out.”

Last year, the Lions had two captains from each of the three phases. Stafford and receiver Calvin Johnson represented the offense, Suh and Tulloch the defense and kicker David Akers and safety John Wendling the special teams. The captains were decided by player voting.

With Akers and Wendling gone, those two special teams spots would be open if that’s the way Caldwell chooses to break down his captains.