With his reputation and the NFL’s increased emphasis on player safety, Lions defensive tackle Ndamukong Suh will almost certainly receive a fine this week for his roughing-the-passer penalty on Jacksonville Jaguars quarterback Chad Henne in Friday night’s exhibition. 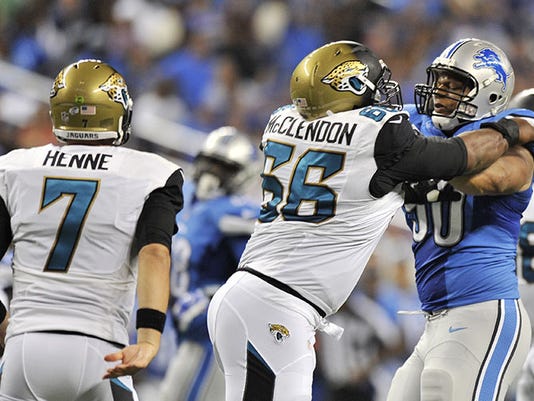 Allen Park — With his reputation and the NFL’s increased emphasis on player safety, Lions defensive tackle Ndamukong Suh will almost certainly receive a fine this week for his roughing-the-passer penalty on Jacksonville Jaguars quarterback Chad Henne in Friday night’s exhibition.

The question now becomes how much the fine in Suh’s FedEx envelope from the league will request this week.

On the Suh scale, the hit was fairly mild, but he still took a step after Henne threw the ball before launching and leading with his helmet.

After the game Friday, Lions coach Jim Caldwell said, “It's a foul, plain and simple,” of the call, and he declined to expand after Saturday’s short walkthrough.

“You’re not going to ever hear me talk about the evaluation of a call that an official made,” Caldwell said. “What I’ll say to you is that’s what he called, that’s what it is and we have to find a way to make certain that we operate within the confines of the rules.”

Between fines and suspensions, Suh has lost $374,294 as a result of on-field infractions during his career. During the offseason, Suh met with Troy Vincent, the NFL’s executive vice president of football operations, to talk about how he can avoid costly penalties. Vincent told the NFL Network Suh was “very receptive” during the meeting.

“It’s a league issue, and I think it’s been handled very well,” Caldwell said. “I think they’ve talked about it at length, and we’ll leave it at that.”

Penalties, however, are a team issue, and any time Suh draws a 15-yard flag it can be detrimental to his team. The Lions had 15 penalties for 131 yards Friday, and Caldwell said he’ll address Suh’s foul similarly to all the others.

“We don’t cut any corners; we don’t pull any punches,” Caldwell said. “We talk about the issue; we talk about what needs to be straightened away, like most families would do. But we don’t dance around issues, and I think we can get them corrected that way.”

The penalty and impending fine overshadowed what was an otherwise incredible play by Suh. On a stunt, Suh ran around Jacksonville center Jacques McClendon along the right edge and was running free toward Henne. It’s rare that someone of Suh’s size has that much free space to hit the quarterback.

Caldwell also declined to comment on whether or not Suh could’ve stopped on the play. Besides the penalty, though, the new coach has been impressed with Suh’s fitness level and is expecting “a really great year” from the two-time All-Pro.

“You better put more than one person on him, otherwise you’re going to have some problems at some point in time during the operation of your offense,” Caldwell said.