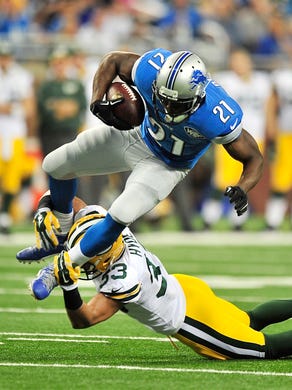 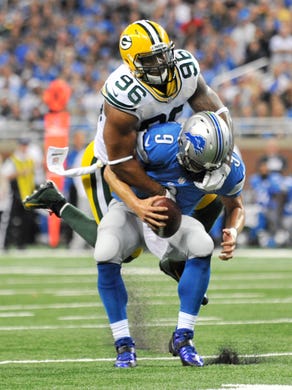 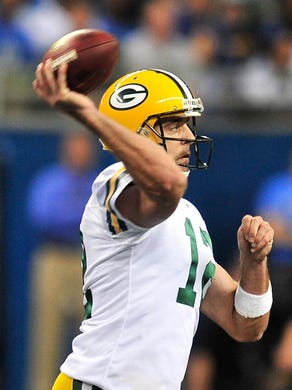 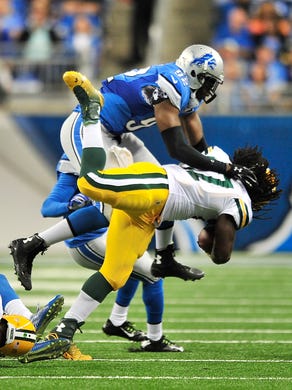 Detroit — When the Lions introduced the defense Sunday, all nine defensive linemen entered the field together, just as they did last year when they beat the Green Bay Packers on Thanksgiving. "We're a unit," defensive tackle Nick Fairley said of the gesture, which was his idea. "We're together, and we're going to get after it."

And they did. The Lions defensive line headlined an outstanding defensive effort Sunday in a 19-7 win over the Packers at Ford Field.

Green Bay ran for just 76 yards, and quarterback Aaron Rodgers threw for only162 yards, his lowest total in a game he finished since November 9, 2008.

Yet, because of the defensive performance and some gutty running in the second half, the Lions (2-1) will wake up on Monday morning alone, though the Chicago Bears (1-1) will have a chance to draw even on "Monday Night Football" at the New York Jets.

The Lions never trailed after jumping out to an early 7-0 lead when defensive back Don Carey returned a fumble by running back Eddie Lacy for a 40-yard touchdown on Green Bay's second offensive play. In the second quarter, the Lions scored a safety when linebacker DeAndre Levy, who captained the defense in Tulloch's stead, tackled Lacy in the end zone on the first play that followed one of Stafford's two interceptions.

"They definitely got penetration. That's pretty much what it was," Lacy said.

And that was the trend all afternoon as the Lions pressured Rodgers and eliminated the Green Bay running game. The Lions defense, 9 points, outscored both offenses Sunday.

"Once you stop the run and make a team one-dimensional, there's nothing too much they can do," Fairley said.

With the Lions leading 12-7 in the fourth quarter, Reggie Bush scored on a 26-yard run to put the game out of reach.

Finishing was a major theme of the offseason, and the Lions ran out the final 6 minutes and 54 seconds to seal the victory on a drive that featured three third-down conversions.

Stafford finished 22 of 34 for 246 yards, two interceptions and a lost fumble. Calvin Johnson had six catches for 82 yards, and Bush had 12 carries for 61 yards and six catches for 38 yards.

Sunday's game was the first time the Lions beat the Packers (1-2) in a game Rodgers finished. Rodgers was 9-1 against the Lions, and the only loss was a 2010 game in which he missed the second half with a concussion.

"I think it's just another game," defensive tackle Ndamukong Suh said, showing that perhaps the Lions won't get big heads after the victory.

Rodgers finished 16 of 27 for 162 yards and a touchdown as the Lions regularly pressured him, including a sack each by Tulloch and Suh. The Lions secondary also played great in coverage most of the game, holding Jordy Nelson to five catches for 59 yards and Randall Cobb to three catches for 29 yards.

The defensive performance was even more impressive without Tulloch, the starting middle linebacker, who hurt his left knee celebrating a third-down sack. He returned for the next series, but was down on the field after the first play of the drive and did not return to the game.

The Lions also lost Carey (hamstring) after the touchdown. He was playing nickel cornerback, and Danny Gorrer and rookie Mohammed Seisay filled in after he re-aggravated the injury that held him out the first two weeks.

"It's frustrating," Rodgers said. "You've got to give the defense credit. They had their fourth nickel in there."

After Carey's touchdown in the first quarter, the Packers responded three drives later following Stafford's first interception, a high pass that went off the hands of receiver Corey Fuller and right to rookie safety Ha Ha Clinton-Dix. After the turnover at the Green Bay 41, the Packers drove for a touchdown on a 10-yard pass from Rodgers to tight end Andrew Quarless.

Early in the second quarter, Davon House's interception of Stafford gave the Packers the ball at the 1, a controversial call that could've just as easily been a touchback. Instead, it led to the safety.

Jeremy Ross returned the ensuing free kick to the Detroit 45, and the Lions used the good field position to march for a 30-yard field goal by Freese, which put them up 12-7.

Neither team scored in the third quarter, though the Lions did drive to the Green Bay 7. The drive ended when Packers linebacker Julius Peppers forced a Stafford fumble and recovered it.

The Packers couldn't convert the turnover to points, and on the next drive, the Lions drove 75 yards in 10 plays, capped by Bush's 26-yard touchdown scamper, to take a 19-7 lead with 10:40 left in regulation.

The Packers turned it over on downs on their next drive, and the Lions used a 12-play drive to run out the remaining time.

"This is a real fine victory, but we've got a lot of work ahead of us next week," Lions coach Jim Caldwell said. "We set high standards around here, and we haven't met them yet."