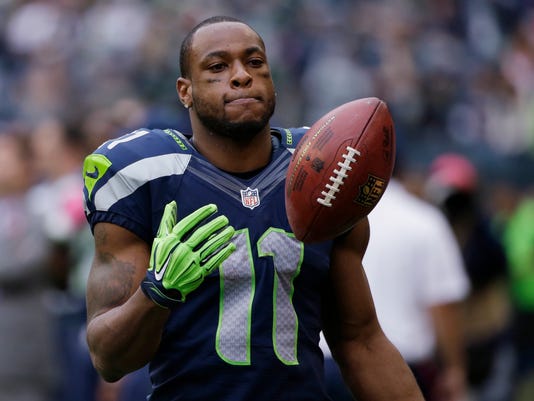 Former Seattle Seahawks wide receiver Percy Harvin stands on the sideline late in the second half of the Seahawks' 30-23 loss to the Dallas Cowboys in an NFL football game in Seattle. The New York Jets acquired Harvin from the Seahawks, Friday. (Photo: Elaine Thompson , AP )

Lions wide receiver Golden Tate might have had a small role in a surprising mid-season trade that sent wide receiver Percy Harvin from the Seattle Seahawks to the New York Jets Friday.

Lance Zierlein, a radio host in Houston and co-owner of thesidelineview.com, reported Friday Harvin had a history of confrontations with teammates in Seattle including Tate.

During the Super Bowl week last year, Harvin reportedly punched Tate and left him with a black eye.

Tate signed a five-year deal with the Lions this offseason worth $31 million, leaving the team with which he won that Super Bowl.

Harvin played in just one game last season due to a hip injury, but played a key role in the postseason, including 45 rushing yards and an 87-yard kickoff return for a touchdown in the Super Bowl win over the Denver Broncos.

Now, Harvin is on his way to the Jets for a conditional draft pick because the Seahawks were reportedly worried about him hurting team chemistry.