Baltimore dealt Atlanta a 29-7 setback with fourth-quarter TD the Falcons' only score. 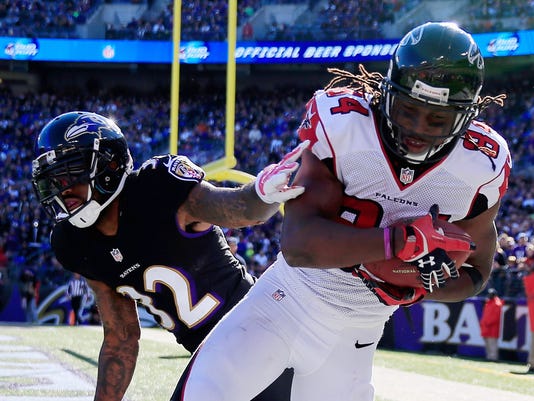 Baltimore — With each passing week, the Atlanta Falcons — and their offense in particular — have become progressively worse.

A 29-7 defeat at the hands of the Baltimore Ravens on Sunday stretched the Falcons' skid to four games.

In each of those four weeks, Atlanta (2-5) scored fewer points than the game before.

When Matt Ryan walked to his locker stall after being sacked and harassed all afternoon, the quarterback appeared to be the embodiment of what the Falcons are feeling: right shoulder wrapped, ice strapped to his left thigh, disappointment on his face.

"When you go out there and get beat soundly, I think everybody knows we've got to play better across the board," said Ryan, who was sacked five times — the last one for a safety.

"We've all played football for long enough to know that when you're getting your butt kicked, you've got to do something different and something better."

But what to do? The Falcons' offense is struggling mightily. Against the Ravens, they rushed for only 68 yards, didn't give Ryan enough time to set and scan for receivers, and converted only four of 15 third down opportunities.

"Today we struggled a majority of the game to get anything going offensively," coach Mike Smith said. "We were behind the chains throughout the entire day. We had pressure on our quarterback; he was not able to ever get comfortable. It was a tough day. Consequently, we never really got in a rhythm."

The Falcons averted their first shutout loss since December 2004 when Ryan connected with Roddy White for a 4-yard touchdown with 7:12 remaining to make it 20-7. It was Atlanta's first fourth-quarter score in five games.

After the touchdown, the Falcons' next possession ended with Terrell Suggs sacking Ryan for a safety.

Joe Flacco sealed Baltimore's fourth win in five games with 1:46 remaining, connecting with Torrey Smith for a 39-yard touchdown pass on a fourth-and-9.

Flacco went 16 for 25 for 258 yards, two touchdowns and two interceptions — both by Robert Alford. Justin Forsett gained 95 yards on 23 carries.

The victory, combined with Cincinnati's loss to Indianapolis, thrust the Ravens (5-2) into first place in the AFC North. Baltimore faces the Bengals on the road next Sunday.

"We've got to find a way to practice better, to prepare better and ultimately to play better," Ryan said.

After outgaining the Falcons 175-61 in the first half, Baltimore continued the pressure in its opening possession of the third quarter. Flacco connected with Steve Smith for a 49-yard completion to set up a 38-yard field goal by Justin Tucker for a 20-0 lead.

The Ravens then kept the ball on the ground for the most part, content in allowing the defense to protect the advantage.

A first half marred by three turnovers and 10 penalties — including three holding infractions against Baltimore rookie left tackle James Hurst — ended with the Ravens scoring twice in the final 2 minutes, 38 seconds.

Baltimore moved 52 yards for a touchdown on its opening possession with help from the Falcons. Following a 36-yard pass interference call against Alford, tight end Owen Daniels caught a 5-yard touchdown pass.

After going three-and-out on its first two possessions, Atlanta and moved to the Baltimore 17 before Ryan lost a fumble when sacked by Pernell McPhee.

Flacco gave it back, lofting a pass into the end zone that was intercepted by Alford.

Late in the half, Baltimore took over at its 41 and Hurst committed another holding penalty. Flacco completed a 19-yarder to Daniels on the next play and added a 20-yard toss to Torrey Smith before Bernard Pierce ran in from the 1.

A fumbled punt by Jacoby Jones of the Ravens gave Atlanta the ball at the Baltimore 37 with 59 seconds to go, but a sack forced the Falcons to try a 57-yard field goal. The kick by Matt Bryant hit the crossbar, and the Ravens quickly moved the other way for a 38-yard field goal on the final play of the half.