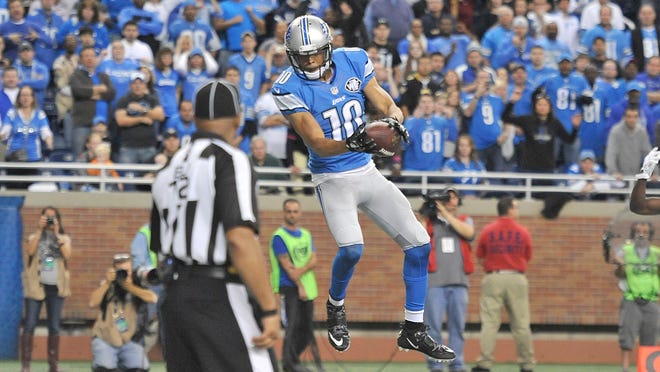 Detroit — Lions center Dominic Raiola wouldn't quite say it, but the point was clear enough during the game. The Lions overcame a 13-point deficit in the fourth quarter Sunday to beat the New Orleans Saints, 24-23, and it was a game the team likely wouldn't have won in recent seasons.

Having Jim Caldwell as coach helped because he kept the players confident despite trailing by two scores with 5 minutes and 24 second left. Having players like wide receiver Golden Tate and free safety Glover Quin didn't hurt either as the recent free-agent acquisitions shone when the Lions needed them most.

When a team's top players perform as they're capable, it frees others like cornerback Darius Slay and wide receiver Corey Fuller, who caught the game-winning 5-yard touchdown with 1:48 left, to make critical plays.

At one point during the game, general manager Martin Mayhew stepped into the press box and poured himself some Mountain Dew, but after the game, champagne would've been more appropriate as his two biggest signings the past two years earned every penny in Sunday's game.

"We never stopped believing," Raiola said. "If you watched that game and looked at our body language, we never wavered."

The Lions needed two touchdowns and a stop, and based on the first three-plus quarters, neither seemed like a reasonable proposition. But as Caldwell said Sunday, "Games in this league are crazy."

With the win, the Lions kept pace in the NFC North as the Green Bay Packers (5-2) beat the Carolina Panthers 38-17, and they did so by stymieing the NFL's No. 2 offense late in the game.

To say the Lions stole one would be an understatement. When Shayne Graham hit a 36-yard field goal to put the Saints (2-4) up 23-10 with less than 6 minutes left, the game seemed to be over. The offense sputtered most of the day and had gained just 241 yards to that point, and the Saints' 408 yards were the most the Lions' No. 1 ranked defense had allowed in 2014.

On the sixth play of the next drive — third-and-14 — Stafford hit Tate with an 8-yard pass, and Tate did the rest, out-running Saints defenders for the next 65 yards to score a 73-yard touchdown that gave the Lions a glimmer of hope and a 6-point deficit with 3:38 remaining.

"My man is amazing," defensive tackle Ndamukong Suh said of Tate, who set career highs with 10 catches for 154 yards.

Shortly after the Saints took over, Quin turned the glimmer into a spotlight with his third interception of the season. On the fifth play of the drive, a third-and-9, Quin knew Drew Brees would try to throw near the line, and he stepped in front of a pass intended for Marques Colston and returned the interception to the New Orleans 14.

Before the pick, though, Quin and strong safety James Ihedigbo — who recovered a Khiry Robinson fumble in the second quarter — successfully fooled Brees with what he called "robber coverage," which couldn't have been more fitting.

"When your number is called to make a play, we've got to make it," Quin said. "And today, we made a great adjustment, my number was called and the stars aligned and I made it."

Those last 14 yards were among the most difficult to gain for the Lions all game. They faced a fourth-and-5 and needed a pass interference by Saints safety Rafael Bush on running back Reggie Bush to extend the drive. New Orleans had 12 penalties for 134 yards.

Joique Bell gained 1 total yard on the next two carries, but on third-and-goal, Fuller got open near the back of the end zone and planted both feet to make the game-winning catch and his first career touchdown.

Down 24-23, the Saints had enough time to drive for a game-winning field goal, and even though Brees converted one fourth down, Slay tipped the next one to the ground to end the game.

Stafford finished 27 of 40 for 299 yards, two touchdowns and two interceptions, and Bell ran for 48 yards and a third-quarter touchdown.

Brees went 28 of 45 for 342 yards, two touchdowns and the pivotal interception.

The Lions gained just 101 yards in the first half, and even though they were in Saints territory four times, they had just 3 points. They converted just 1 of 6 third downs in the half.

The Saints opened the scoring with a 13-yard touchdown pass from Brees to fullback Austin Johnson to make it 7-0 with 13:56 left in the second quarter, the first touchdown Lions allowed in a first half since Week 3.

The Lions turned Ihedigbo's fumble recovery into a 21-yard field goal by Matt Prater, though the kick hit the left upright.

On the final drive of the first half, Brees quickly moved the Saints down the field with five passes of 10 or more yards, and a 27-yard field goal gave them a 10-3 lead at the break.

The Saints opened the second half with a four-play scoring drive, capped by a 46-yard touchdown pass from Brees to Kenny Stills, who zoomed past Slay.

The Lions answered on their next drive, which was easily their best of the day. Bell scored on a 1-yard run that finished a 12-play, 80-yard drive to cut the deficit to 17-10.

On the next drive, Stafford threw his second interception on a pass that bounced off tight end Jordan Thompson's hands and right to safety Kenny Vaccaro. The Saints turned the second turnover into another field goal, a 36-yarder by Graham with 5:24 left.

Then, everything went the Lions' way.