Ansah coming into his own for Lions

Ansah coming into his own for Lions 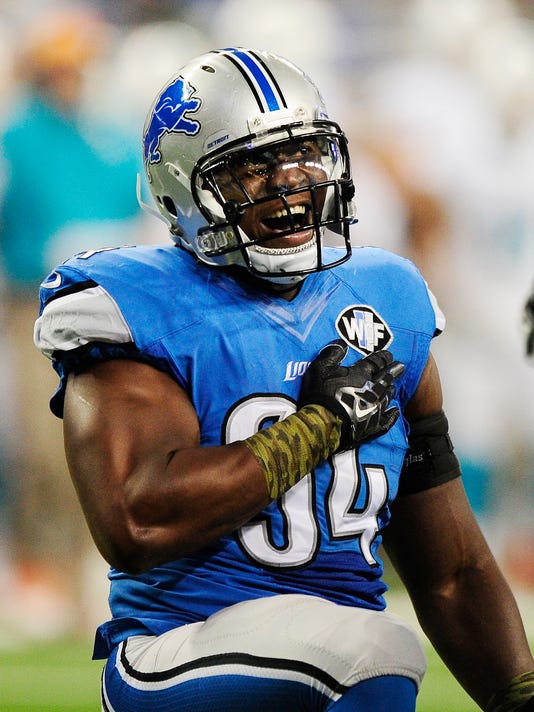 Allen Park – — Bears cornerback Charles Tillman is among the players who have compared Lions receiver Calvin Johnson to the create-a-player in the Madden NFL video game series because he's so difficult for opponents to stop.

Standing 6-foot-6 and 278 pounds, Ansah has ideal size for a defensive end. When he ran the 40-yard dash in 4.63 seconds at the combine last year, he became a lock to be a top-10 pick even though he'd played only three years of organized football after growing up in Ghana. The Lions drafted Ansah fifth overall last year, and he led all rookies with eight sacks.

In his second year, Ansah has shown significant improvement. He already has 5½ sacks, but he's also matched his tackle total from last season with 32, nine of which have been for loss. Ansah also has forced three fumbles this year and has been a key cog in the Lions' No. 1-ranked defense.

Knowing Ansah is in just his fifth year playing football, the Lions are confident he can still make massive strides.

"I don't think there's any question that he's getting better and better all of the time," coach Jim Caldwell said. "You may think that I'm just making idle talk, but he still hasn't scratched the surface yet. He's learning and getting a good feel, getting confident about his repertoire of moves, how to handle the run and things of that nature.

"He's still developing, and that's kind of frightening. That kind of speed and power, when he gets the experience to match, I think he's going to do exactly what he's capable of doing and that's being outstanding consistently week after week."

The Lions (7-2) play at Arizona (8-1) Sunday, and the Cardinals have allowed just 16 sacks this year, which could make it difficult for Ansah to have flashy plays.

But he's been more consistent in recent weeks and has improved as a run defender. Starting with his 2½-sack performance against the Vikings in Week 6, Ansah has 4½ sacks, 16 tackles and three forced fumbles in the past four games.

More impressive than the stats, though, are his impact plays from game to game. On a Dolphins three-and-out in the first quarter in Week 10, Ansah stopped a reverse for an 8-yard loss on first down and sacked Ryan Tannehill on third down.

In the fourth quarter, Ansah made a tackle 16 yards downfield after Brandon Gibson caught a deflected pass. On the next play, he tackled Lamar Miller after a 2-yard gain.

"Who does that?" Mosley said.

With the Lions defense performing as it has, tackle Ndamukong Suh and linebacker DeAndre Levy have received due praise. And Ansah and Suh have become close friends in what is a tight-knit group of defensive linemen.

"I think anytime that you can foster a relationship that's strong between one high performer and the other, I think it's a positive," Caldwell said. "I think Suh's such a great example for those guys in terms of preparation, body, mind and spirit in terms of this game."

But if Ansah continues progressing as he has in his first season and a half, his teammates think he'll soon be in the discussion about the top pass rushers in the NFL.

"He still just don't know football," Mosley said. "It's scary what he can be. If he can just put it together every single play, he can be one of the most dominant D-ends in the NFL.

"It's just natural ability. We're talking about a guy who tried out at BYU and turned it into a career. The more time he gets on the field, practice and in-game experience, the better he's going to be."